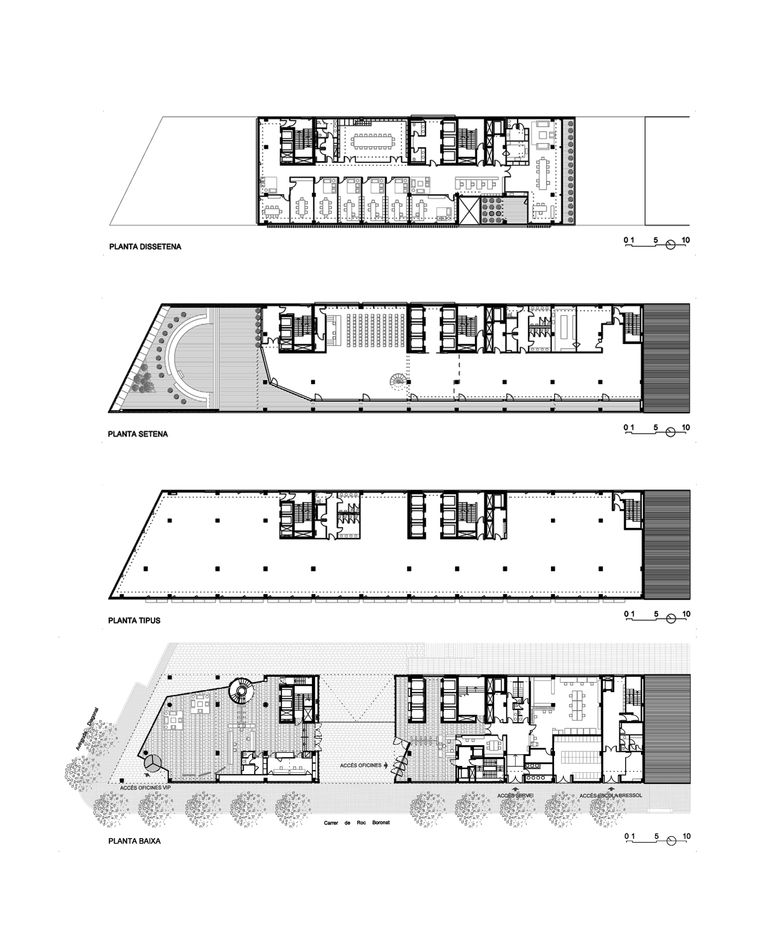 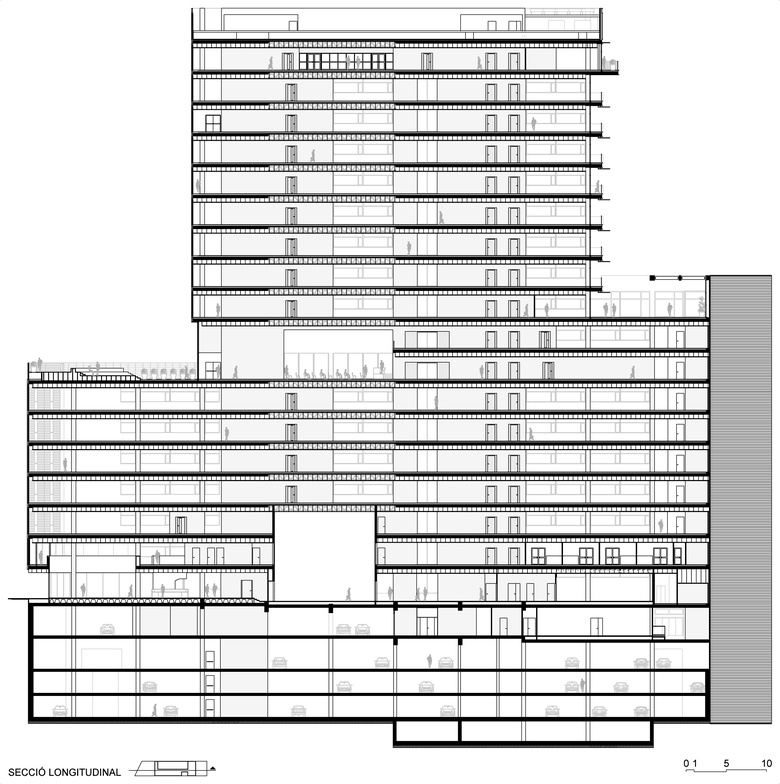 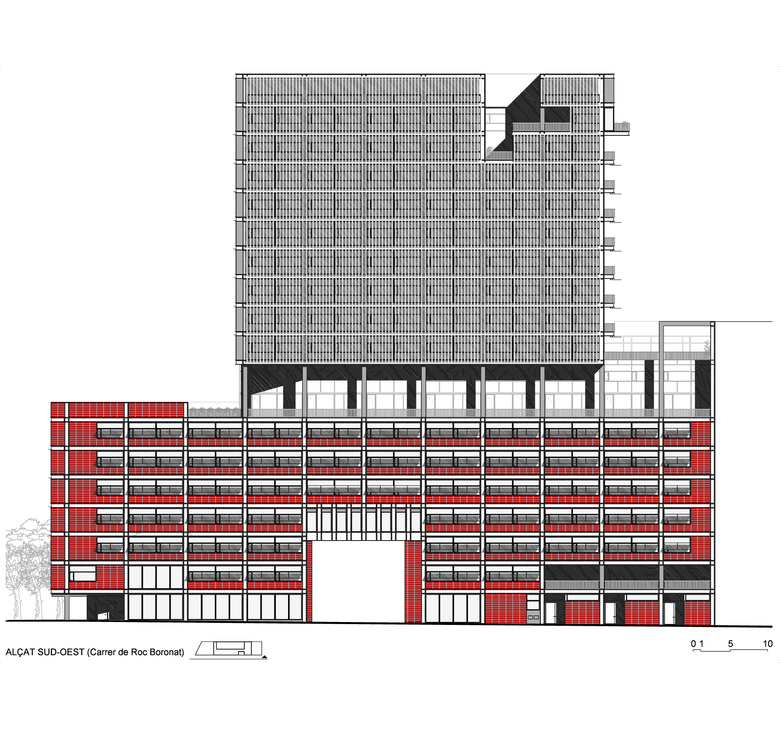 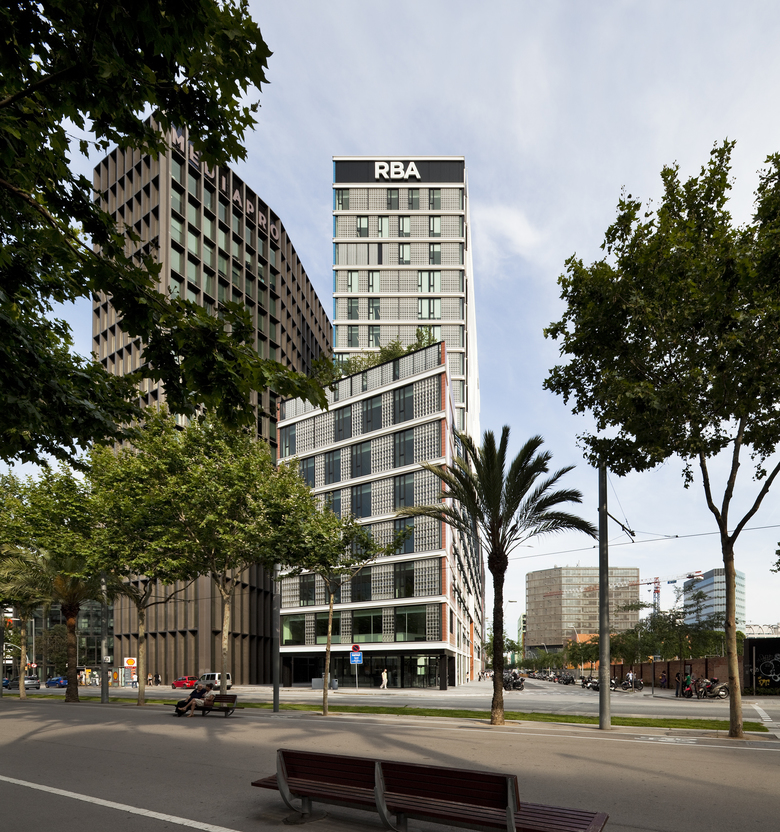 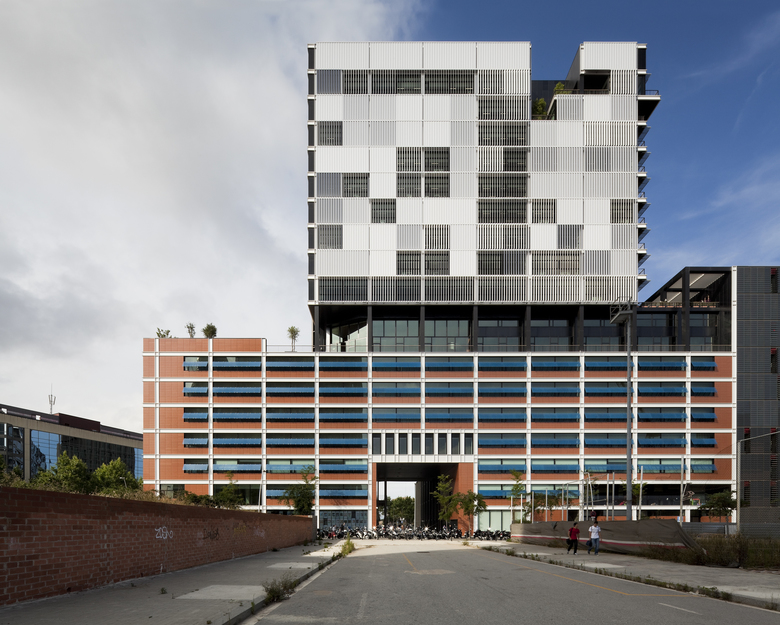 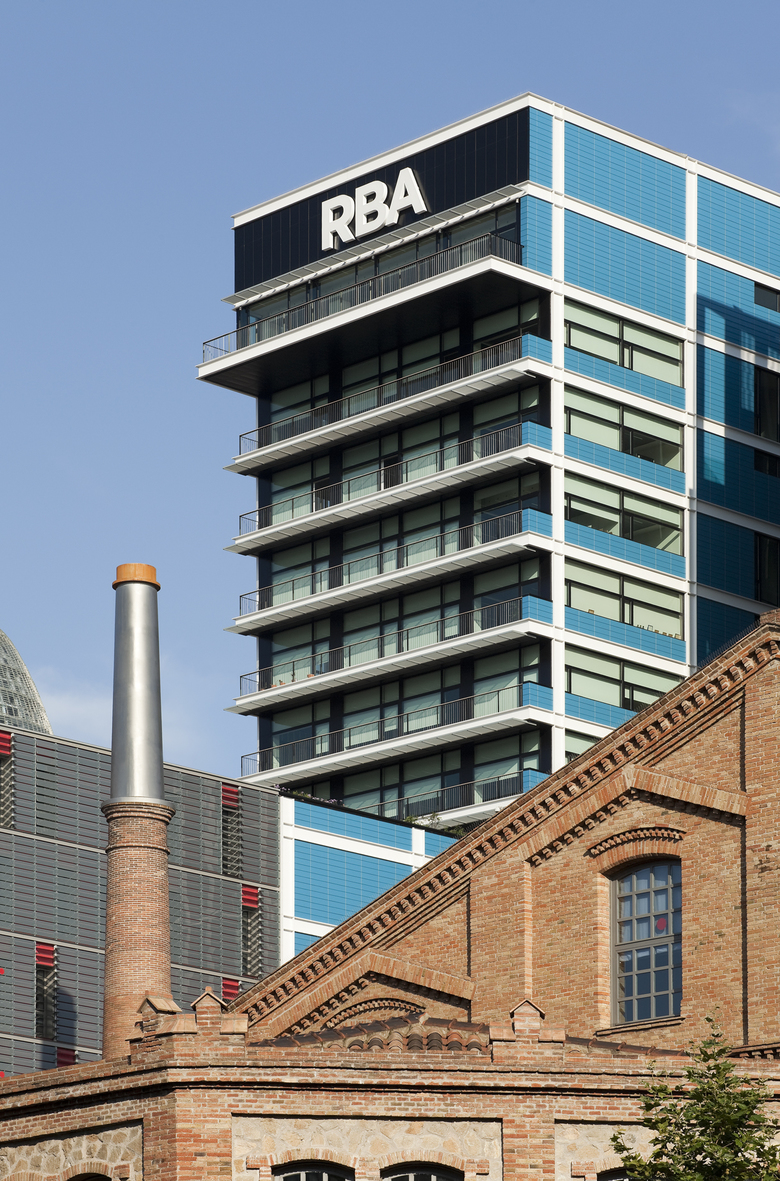 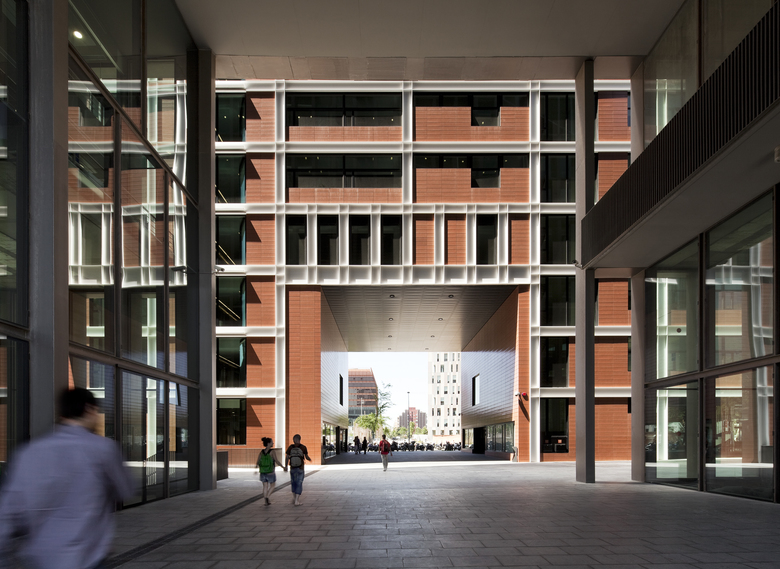 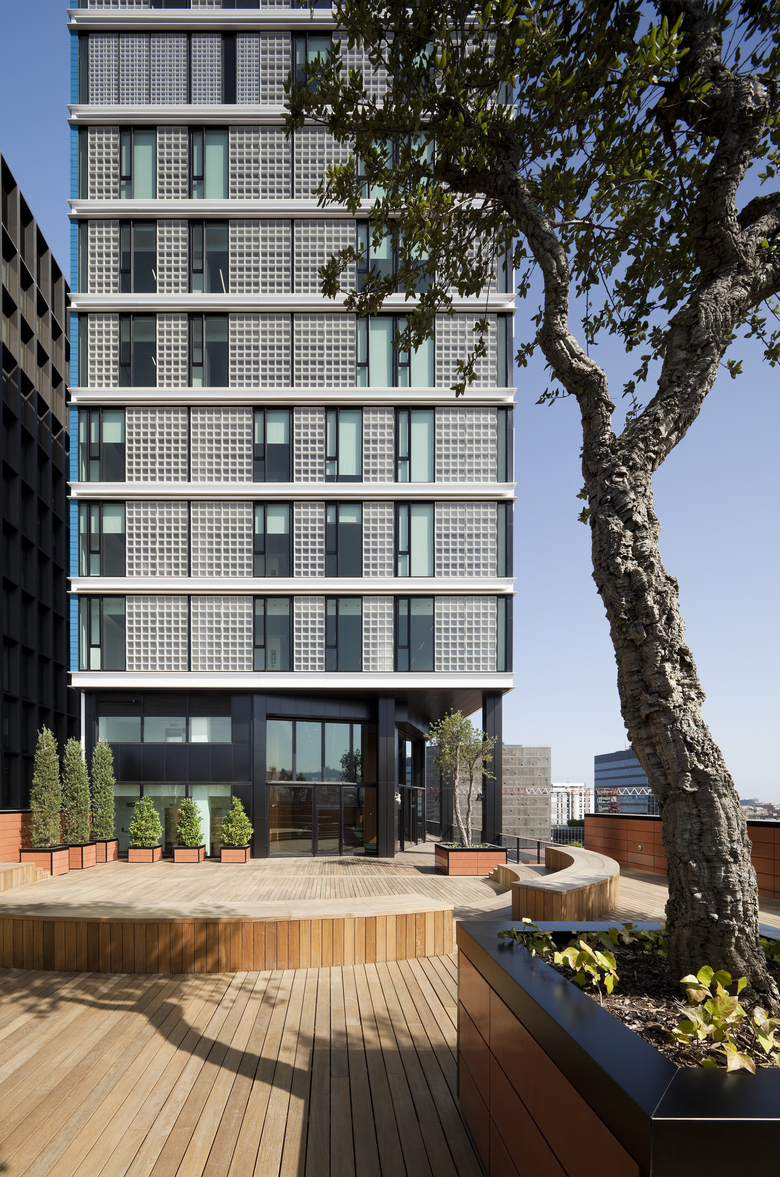 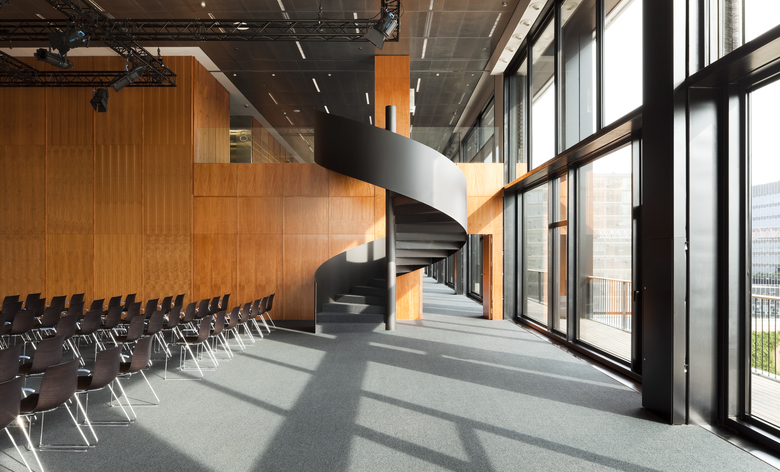 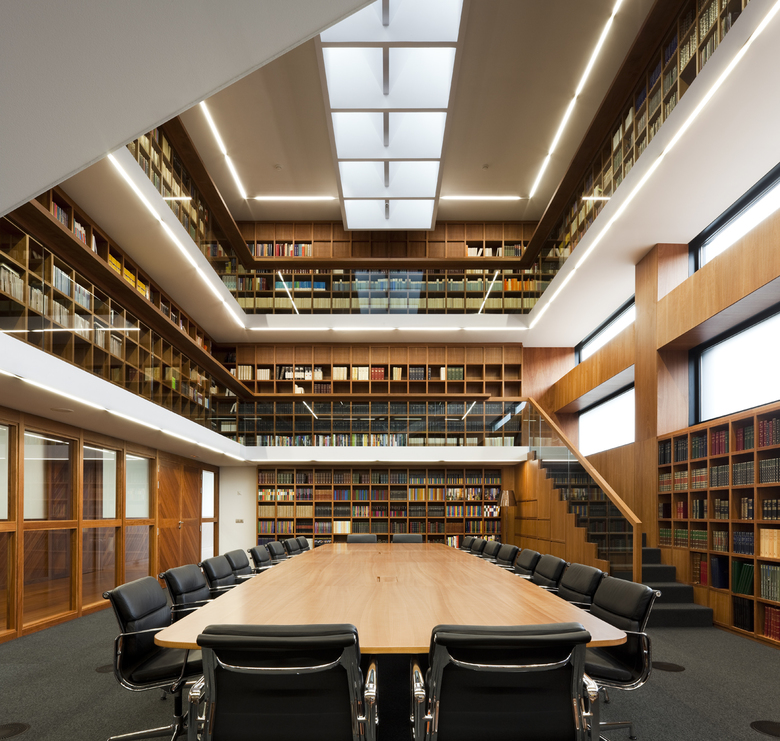 The new offices building for RBA Editors, exhibits two grammatical streams. One related to the form and scale, and the other with the details of their chameleonic façades. Since the irregular form of the building's volume was predetermined by the urban plan, we realized that by drawing a simple rectangular composition in the main façade facing west – similar to the compositions of painter Piet Mondrian – the rectangle of the upper levels could float above its base. The terrace remaining in the space between the two rectangles could become an ideal space for social open air activities of the company. With this decision the lower rectangle, corresponding to the city's street architecture, could be detailed to a more human scale, in contrast to a more metropolitan scale of the upper rectangle. The other grammatical stream concerned the different solutions corresponding to the orientation of the façades. The narrow North facade facing the main avenue did not require any protecting element, so it could be fully glazed. Instead, the long facade facing west, must be protected from the intense heat and light of the afternoon sun. The floor to floor “brise soleil” (sun breakers) respond to its metropolitan scale, and the detailed silicon serigraphied glass shades protecting the slightly tinted glass in the horizontal windows introduce a more human relationship with the street. In the narrow south facade, horizontal terraces prevent vertical penetration of the midday sun. The east façade, protected by the office building situated ten meters away, did not require sun protection. Another factor was the reference to the neighborhood's industrial past, expressed by identifying a simple structure frame with white aluminum profiles and a light-weight colored ceramic panel, referring to the few surviving brick factories. The project consists of an office building of 19,000 m2 – 17 floors high and 4 basement levels for parking – with façade in Diagonal Avenue and Roc Boronat Street, located in the new [email protected] district of Poblenou. It has a pedestrian passageway that crosses the building in their three first floors, two entries in the ground floor and two vertical access nucleus. The public spaces are placed in the intermediate floors with an auditorium hall with terrace for the social activities of the publisher. In the highest floors are the executive offices and the library.