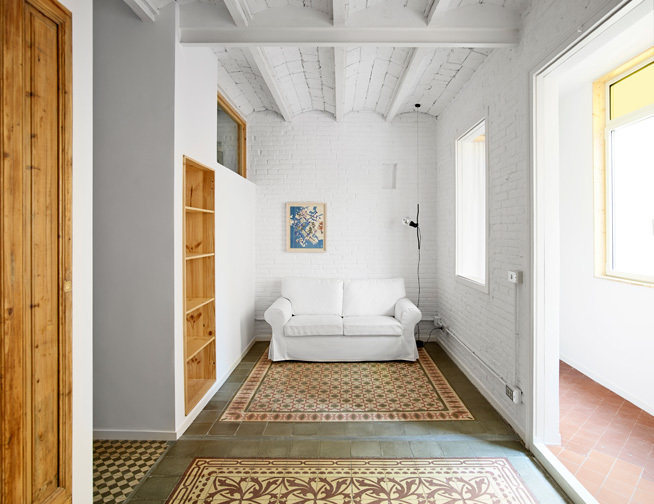 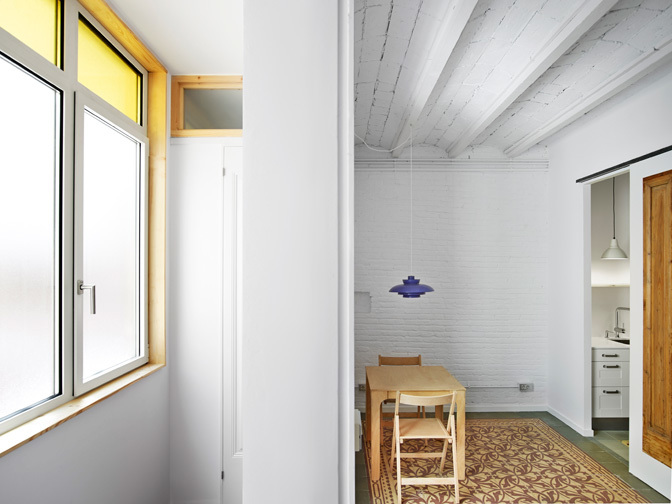 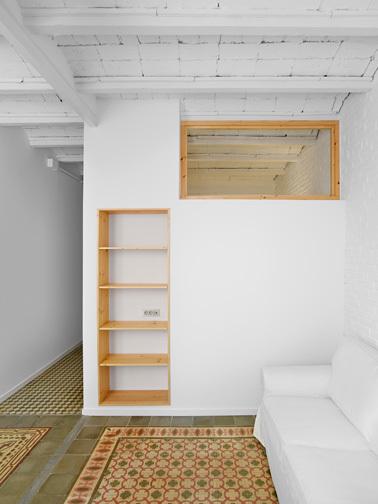 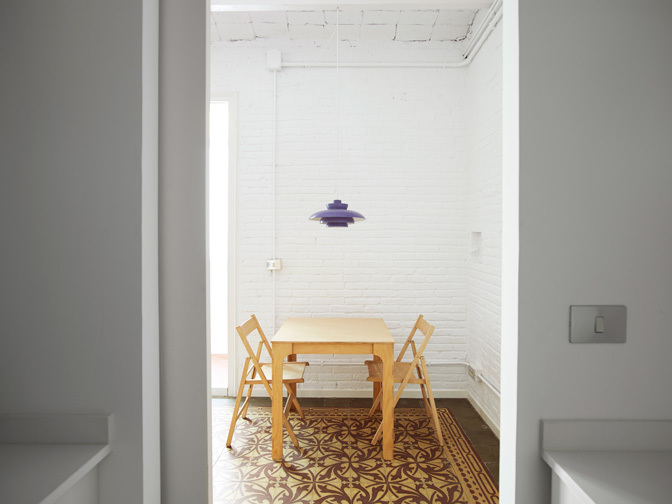 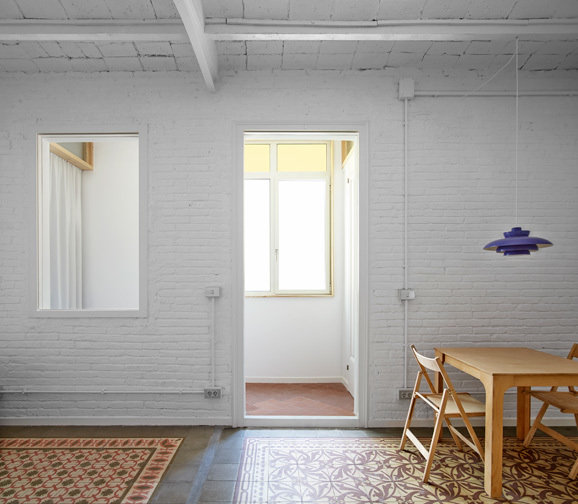 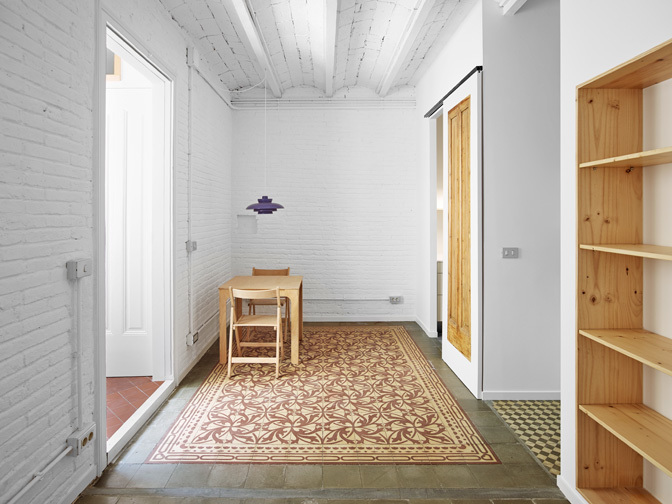 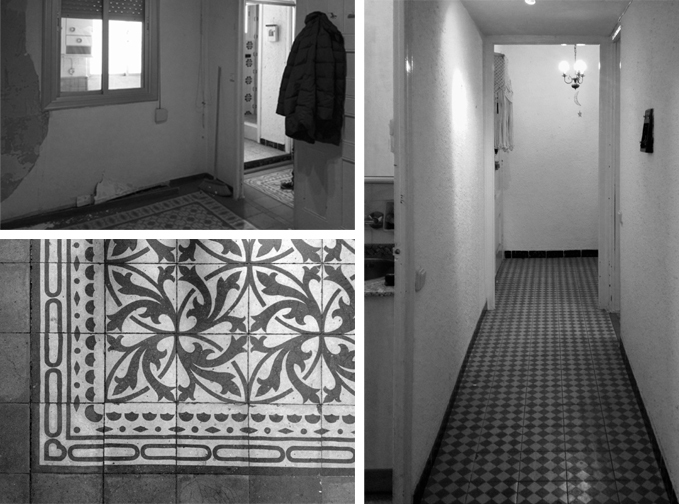 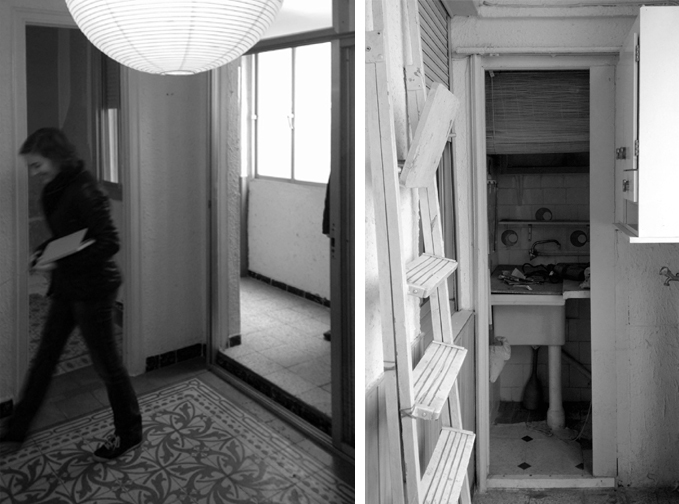 The apartment, a mezzanine of minimum surface (39 m2) built in the 20s, consisted of two small bedrooms, a dining area, a kitchen and a gallery with bath and laundry, facing to the block inner courtyard. The small size of the spaces hindered their use according to current standards. The house had been inhabited for years by a family of four and the need to maximize all the available space had resulted in the colonization of the hall through the construction of a false ceiling with storage which considerably reduced the height in this area. The only natural light coming into the apartment was through the gallery, and the narrowness and degradation of the block courtyard helped to generate a sense of sadness inside.

The intervention focuses on one side in modifying the distribution in order to adapt the program to the new needs as a sporadic home for a retired couple. On the other, in the search for mechanisms to provide the house of a new space and light sensations.

First we proceeded to demolish the storage ceiling of the hall, recovering the original height. Both doors at each end were also eliminated giving a greater sense of spaciousness when entering the house. Part of the old double bedroom merged with dining generating a new larger room with two areas living - dining, spatially defined by the two existing tile carpets. The excess of this operation was added to the old single room in order to get a double one.

The closure between the livingroom and the bedroom has been solved by an element of a certain thickness which integrates closet and shelves, while solving storage needs of both spaces. An upper glass allows light from the gallery entering the bedroom. In the case of the kitchen, the door has been moved allowing a scheme of two bars that incorporate all the necessary: preparation, cooking, cold, sink, dishwasher and storage.

The exterior walls of the gallery have been thermally improved allowing the elimination of the windows that separated this space from the inside. With this operation the space of the new living room is expanded and light flows into the house enhanced by the white walls and ceilings.

As for the materials, the intervention has recovered the original elements through a rereading that provides the house a new character. The plaster of the perimeter walls and the ceilings were removed leaving the brick walls and envigado sight, gaining breadth, depth and rythm. Hydraulic mosaics have been preserved remaking its limits where it has been necessary in order to adapt them to the new distribution. Existing doors, which once had been constructed from the union of shutters, have been pickled and reused again as a part of new doors. Finally the white color used generally contrasts with the bright colors of the hydraulic tiles from Escofet which acquire all the attention.

Other Projects by Oliveras Boix Arquitectes