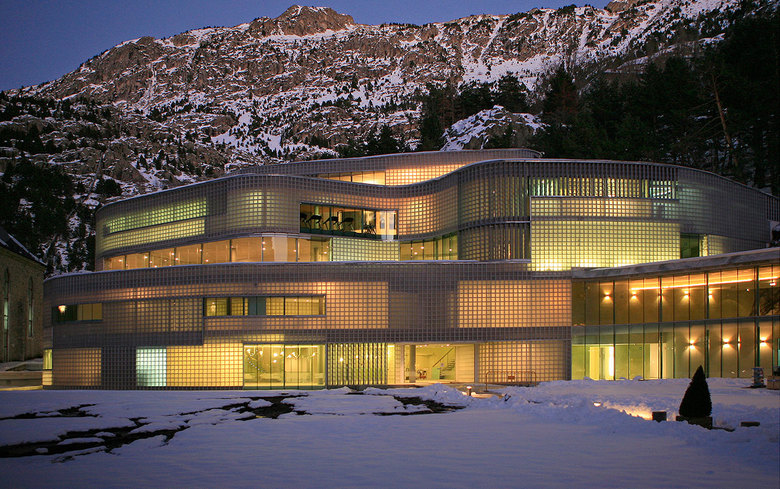 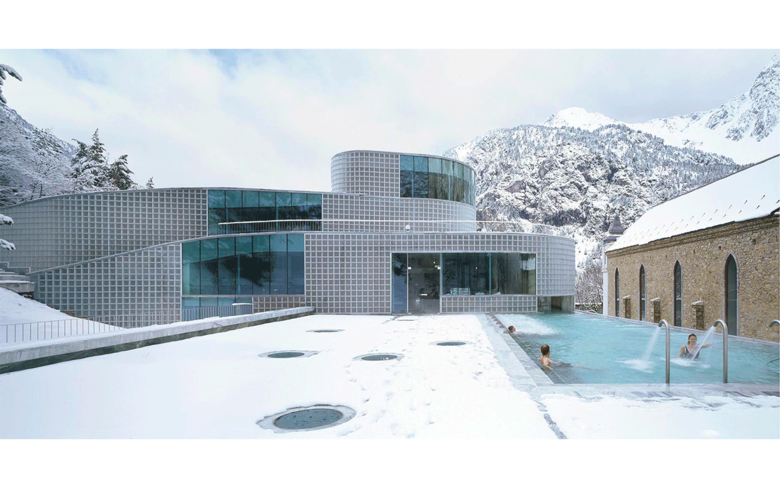 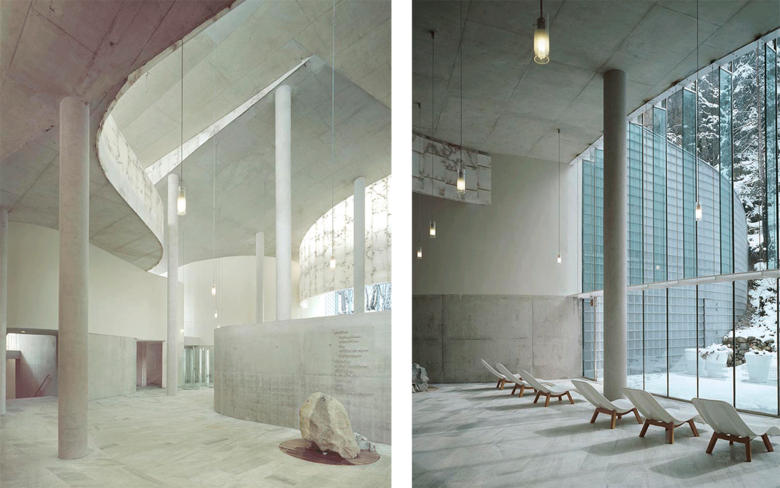 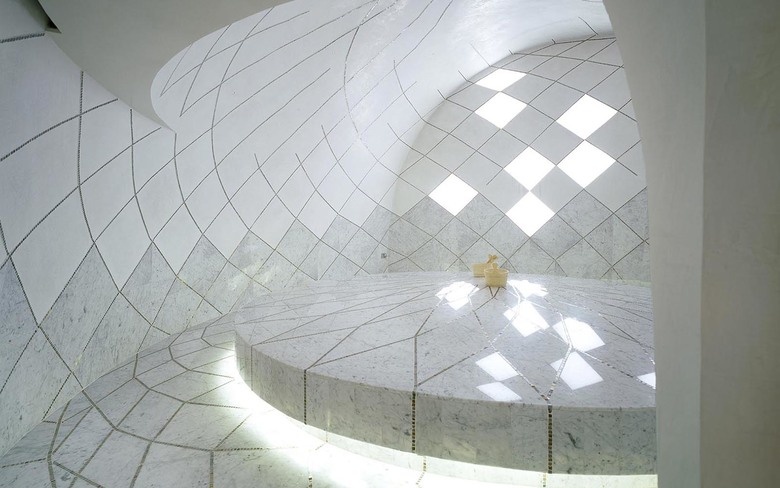 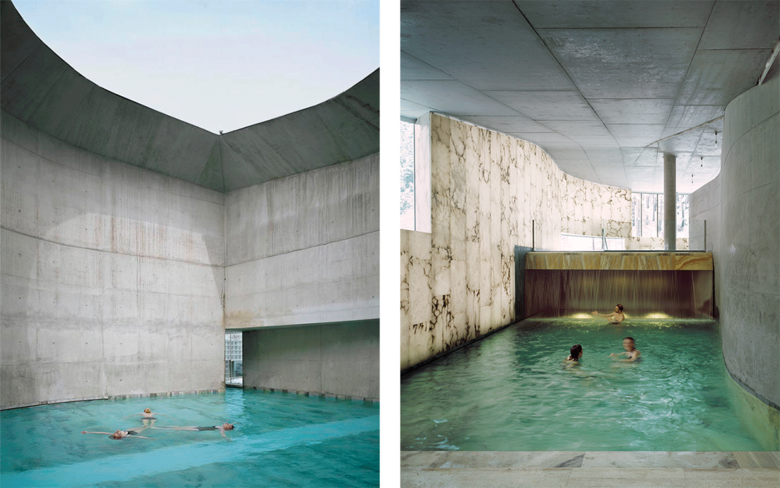 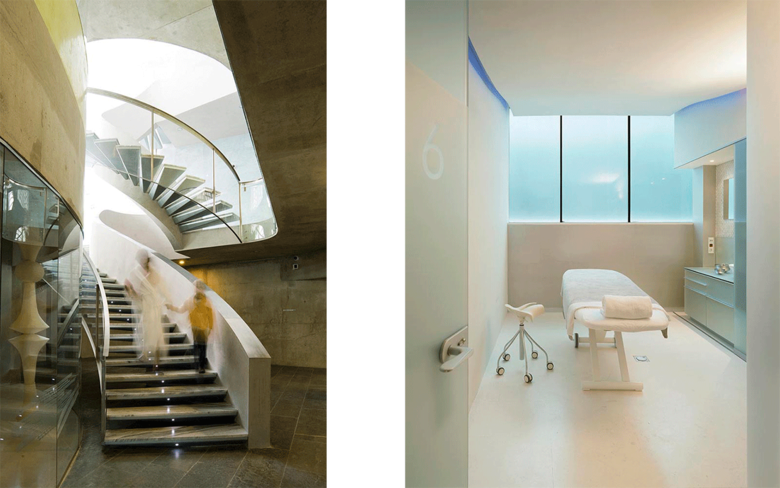 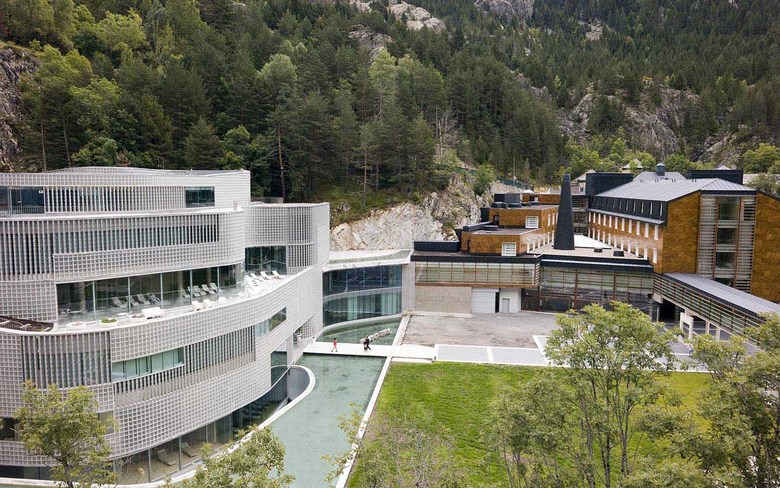 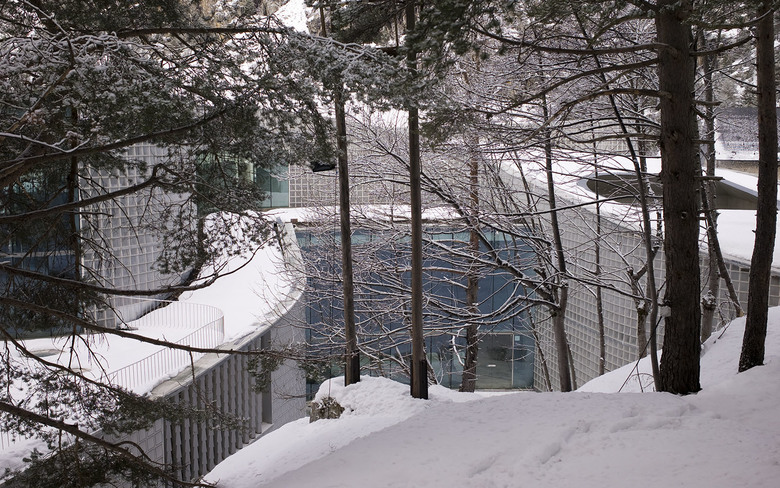 The Baths at Panticosa are located in the dramatic Valle del Tena of Aragon, Spain, where mountain peaks near the project site hold snow throughout the year. Waterfalls, rivers and streams cut the surface of the mountains and the valleys, while underground the aquifer mixes with thermal springs from deep beneath the surface of the earth. The project highlights the idea that contemporary architecture must pay better attention to the environment and natural resources that surround the project.
The design concept of this luxury spa and hotel sought a balanced response to the natural setting on one hand and to the urbanized context on the other. The structure of the resort is built up into the side of the mountain, integrating its volume with that of its natural setting. To its neighbors, a church and a hotel, the building design offers a neutral response, moderately acknowledging the traditional space-making of these rectilinear blocks disposed orthogonally to one another. A series of curving walls or “ribbons” define the building’s exterior form. These “ribbons” spring from the mountainside and terminate equally, while between them are green roof surfaces in a series of terraces, forming extensions of the mountain landscape. This ‘watery’ shape gives a reduced appearance of bulk, and results in a structure that is thoroughly integrated into its immediate environment.
The program is complex, and the municipal zoning limits require that much of the floor area be located underground, making the provision of natural light and views of the surroundings to the maximum area of the plan a design priority. The carving out of the building volume and the strategic location of windows serve to connect the interior spaces with the mountain landscape, giving the visitor a series of orientating cues and embracing him in an atmosphere of wellness and serenity. On the other hand, the overlapping ribbons envelop and blend the spaces as they weave through the interior. On the main level are the pools and saunas, with one exterior and three interior hot pools, Turkish baths, cold baths, ice baths, saunas, showers, foot baths, relaxing areas, and juice bars.
The façade is built of a custom-made glass block, trapezoidal in section, acid etched both inside and out. This block’s form was designed to accentuate the curvilinear aspect of the façade, the overlapping of each block course over the one below creating a shadow line that reiterates the planimetric curve of the façade.