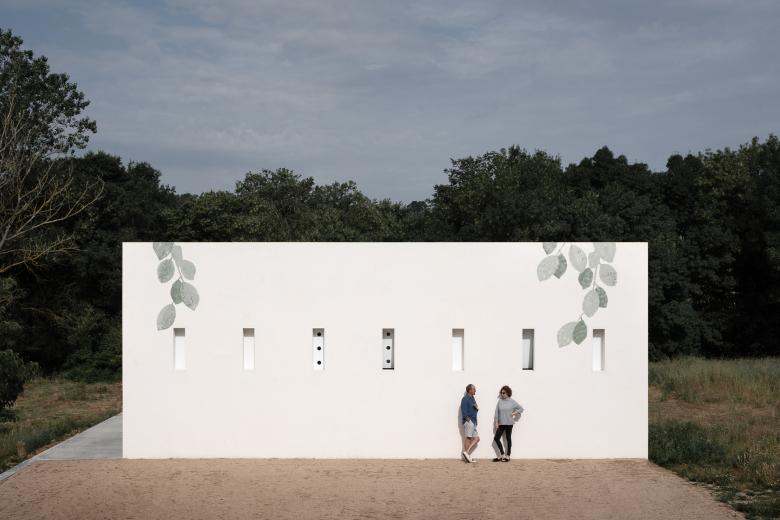 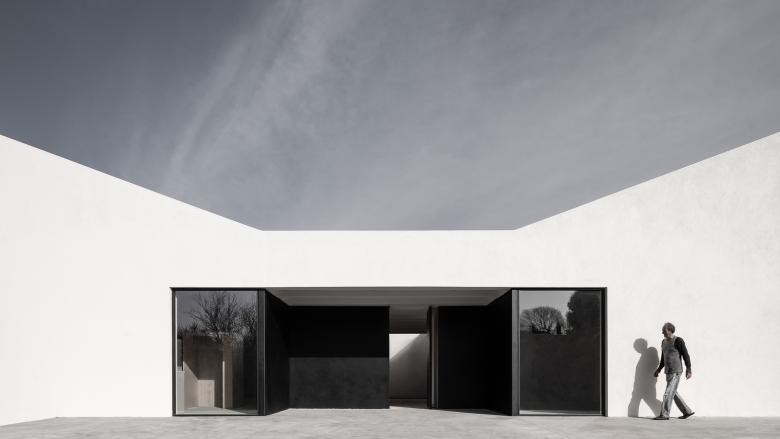 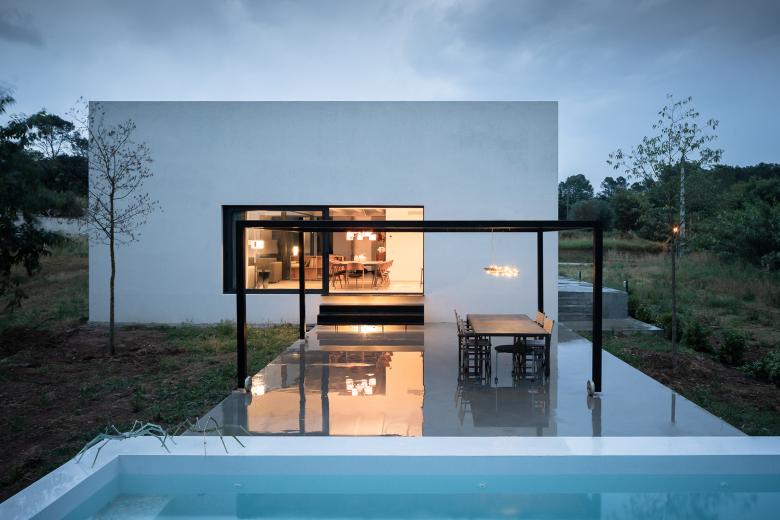 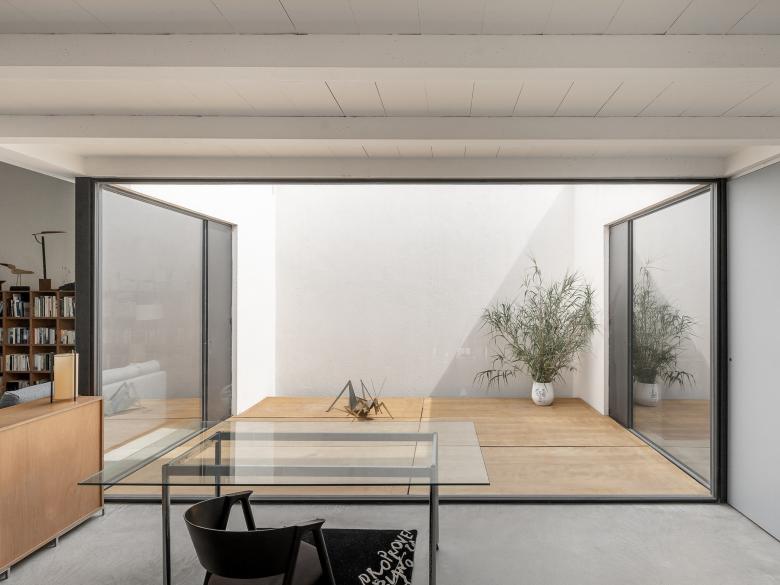 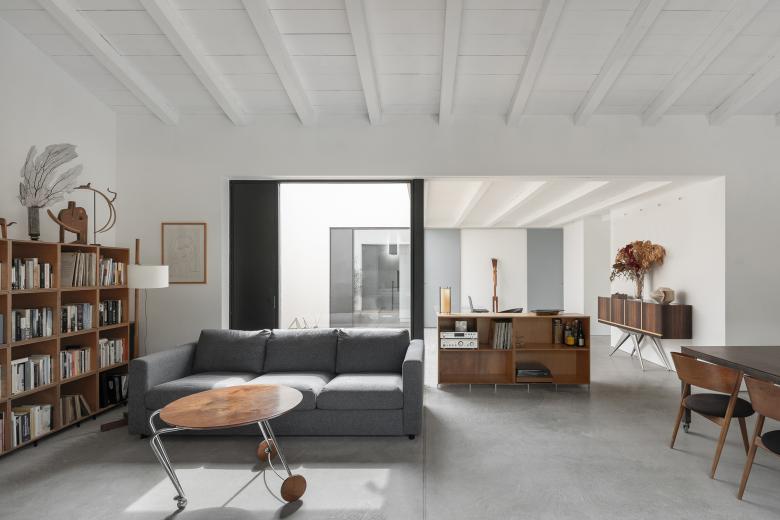 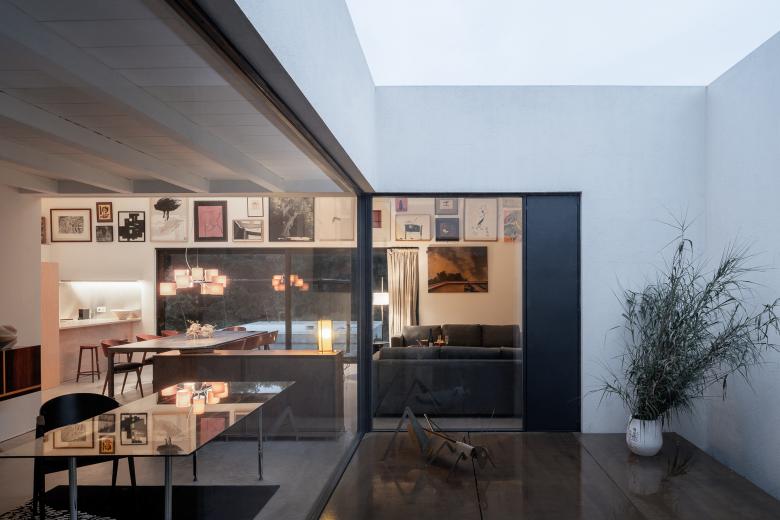 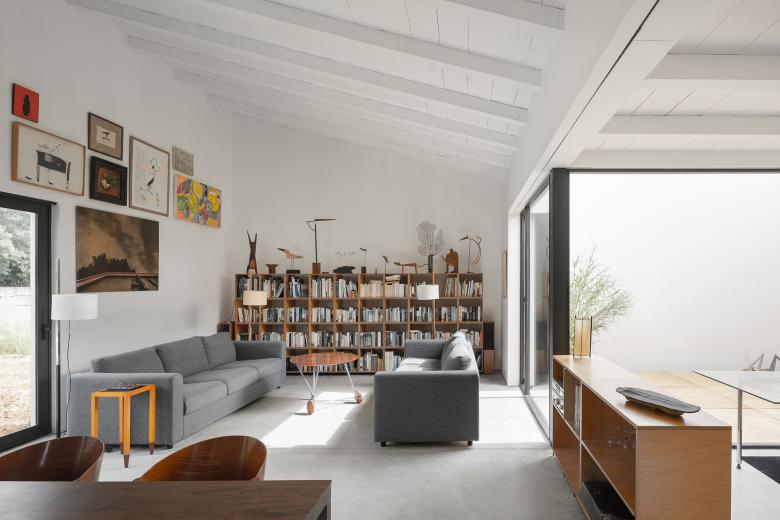 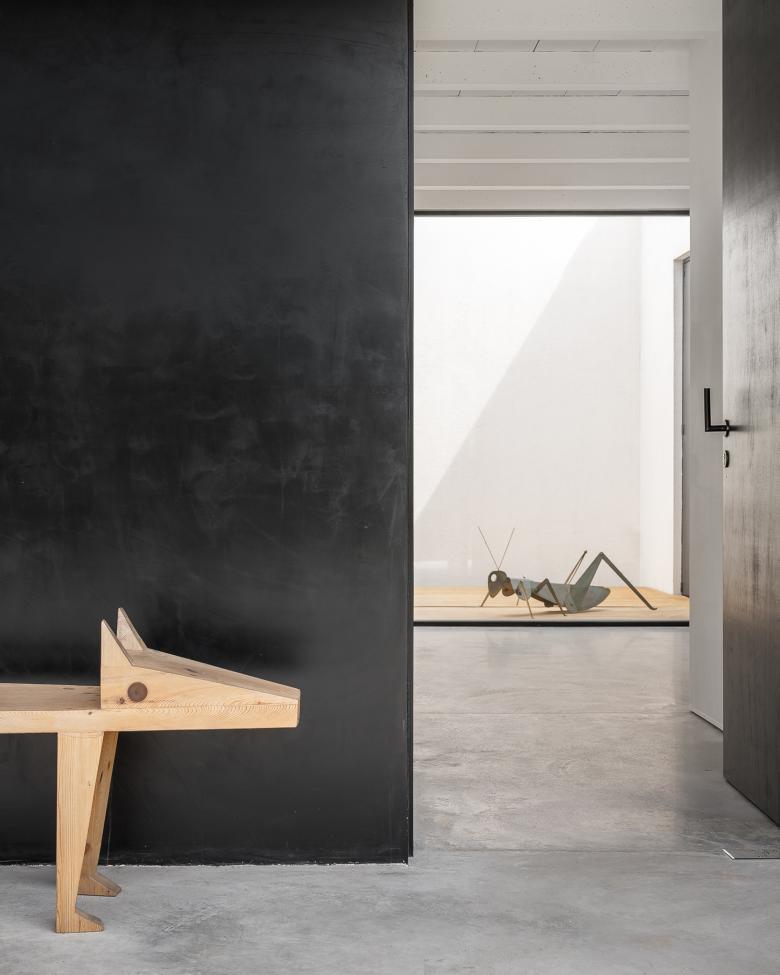 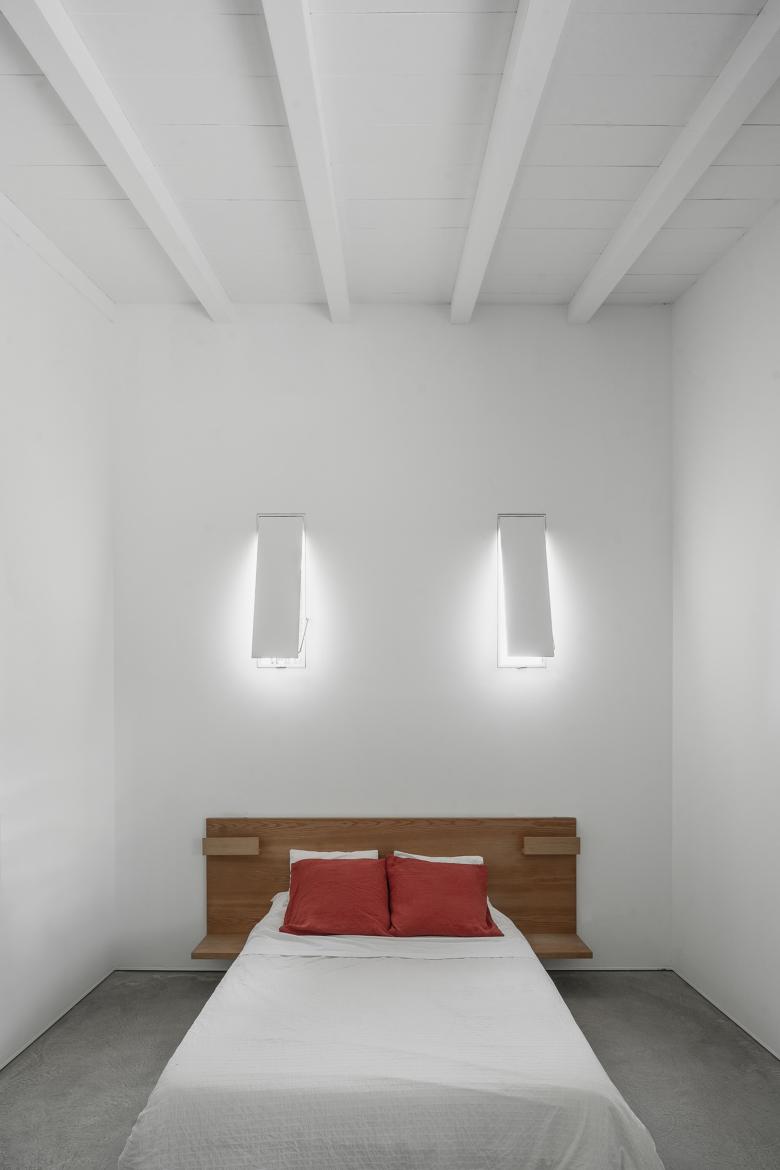 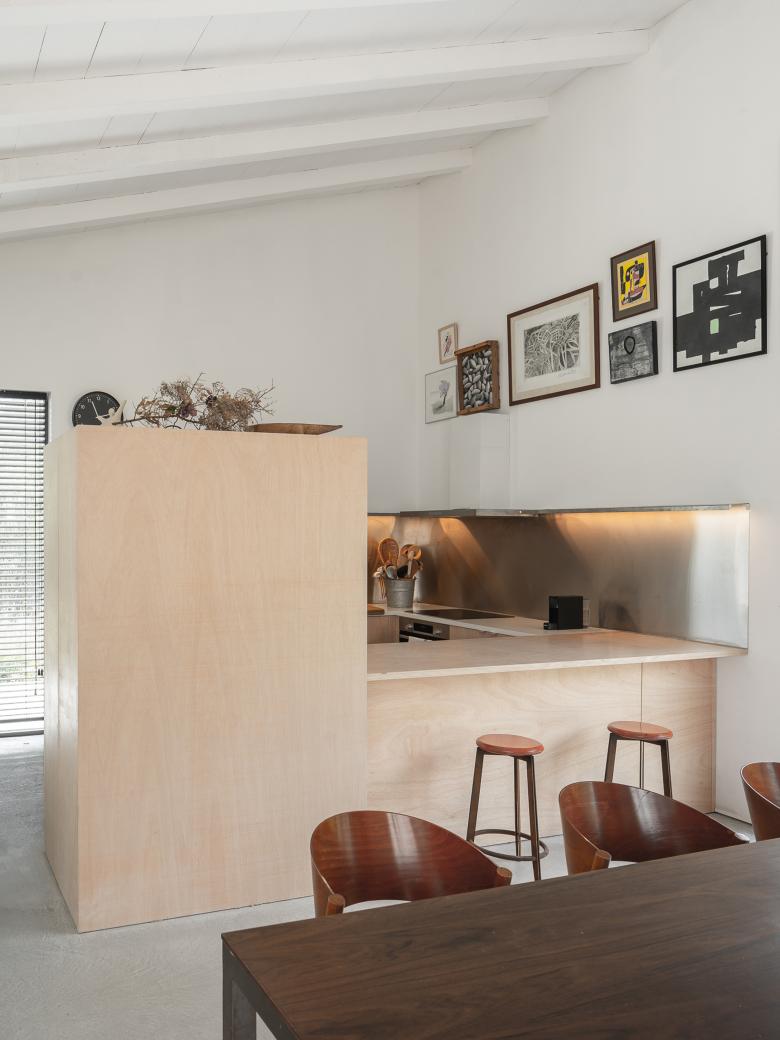 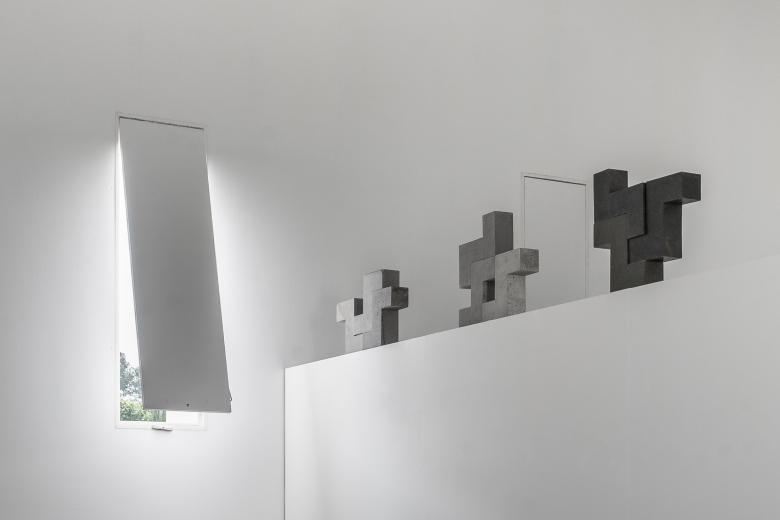 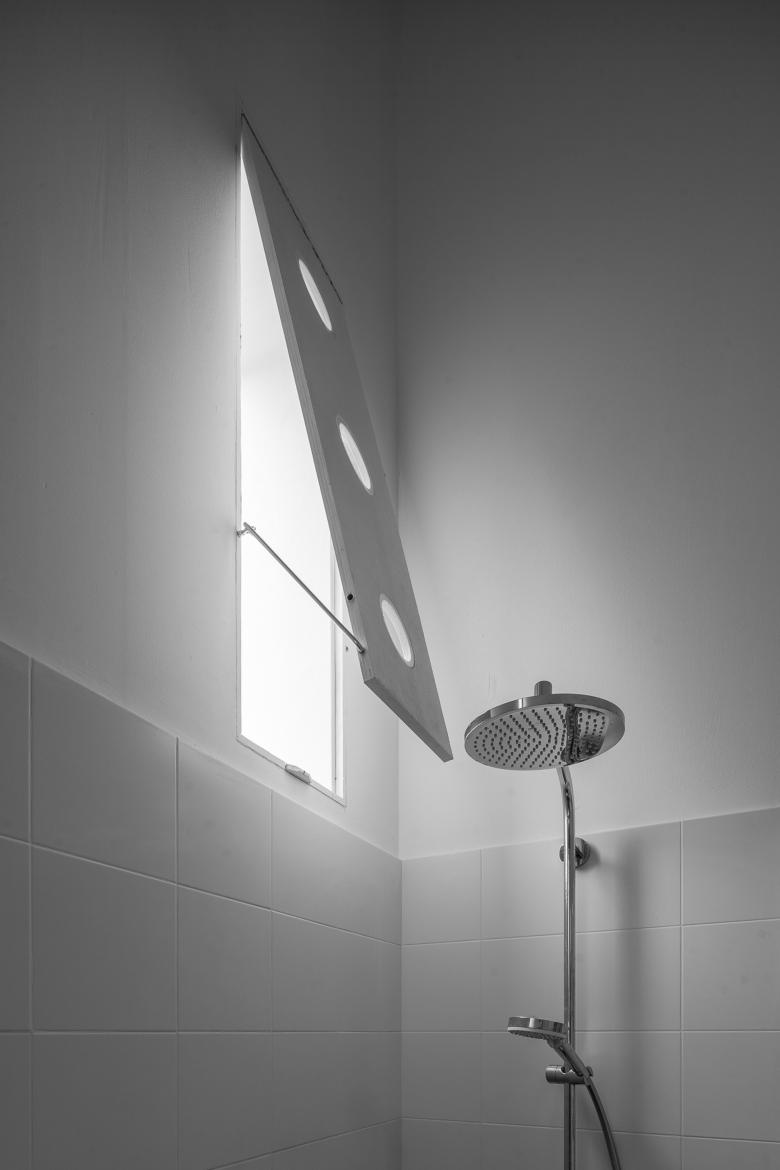 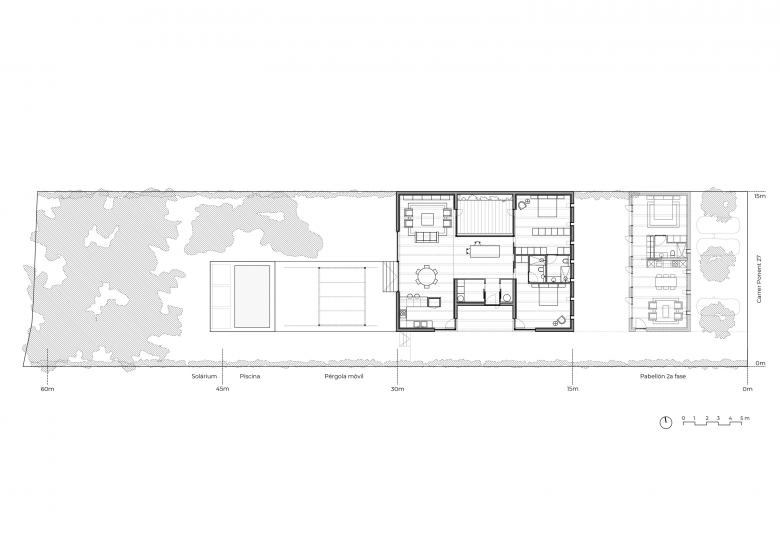 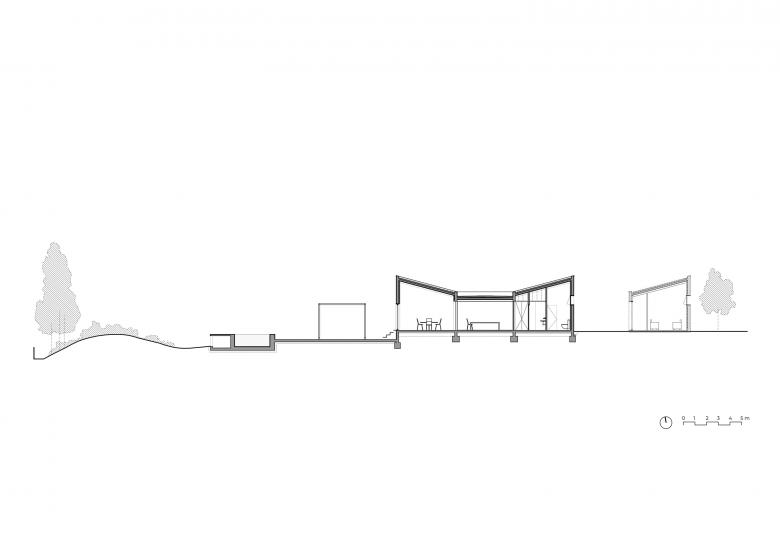 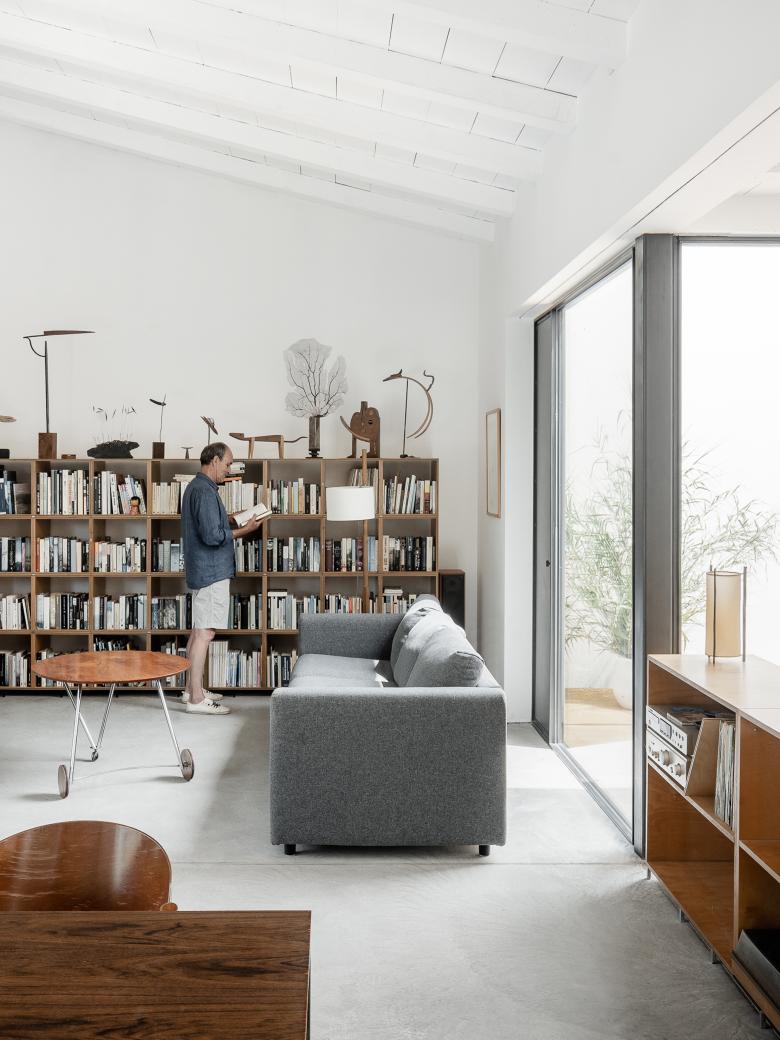 For me, the new house for Pete Sans, industrial designer and surrealist artist, and Regina Saura, painter and mural artist, in the village of Gaüses in Alt Empordà, has represented much more than a professional commission. It has offered me the opportunity to plan and build a house for friends I feel very close to, both culturally and artistically.
Pete Sans, son of the 1930s surrealist painter Jaume Sans, who belonged to the avant-garde ADLAN group, has produced designs including the Lamparaprima, the Mesita table and the Coqueta chair, which won the ADI-FAD Golden Delta in 1988.
Over the years, Sans has also made an extensive collection of sculptures which have found their place in the new house. They include the cat-bench guarding the house in the porch, the grasshopper on the patio and the metal spiders in the swimming pool, as well as other smaller sculptures to be found all over the house.
Regina Saura, a painter who over the last few years has alternated between working in San Francisco and Empordà, has held exhibitions in various countries. From her beginnings in the early eighties, using collage techniques, to her latest works inspired by Japanese themes, including her experiments with performance and large-format murals based on themes linked to nature, particularly forests, Saura has created iconic works such as the mural on the facade of the industrial building belonging to Cocina Hermanos Torres, the work of Carlos and Borja Ferrater. Pete Sans also helped design the lamps inside the building.
Beyond her paintings, which can be found inside the house, Regina wanted to leave her mark on the most visible facade, with a naturalist motif acting as a signature.
The house is on a long, narrow site between neighbouring plots which descends from the eastern end of the main street in Gaüses to a torrent running along its western boundary. The project lay-out, determined by the topographical orientation and concern for privacy, is a set of 12.5 x 5 metre pavilions interspersed with voids or courtyards. The programme is organised in the pavilions, and the voids provide access and allow cross-ventilation and light into the interiors.
It is a simple building, efficient thanks to its insulation, which expresses the form of its construction in the materiality of its finishes. Inclined ceilings built with concrete and steel semi-beams, ceramic tongue and groove that receives the insulation, and Arab roof tiles as a finish imposed by the regulations are complemented with walls of white stuccoed blocks and polished concrete floors.
Outside, there is a garden with native species as an extension of the local landscape, a small swimming pool and a movable pergola designed by Pete Sans.
Ultimately, the construction – a simple, austere building which has cost very little (less than €1,000/m2) – has allowed its inhabitants to find a way of personalising the new house in order to make it theirs.