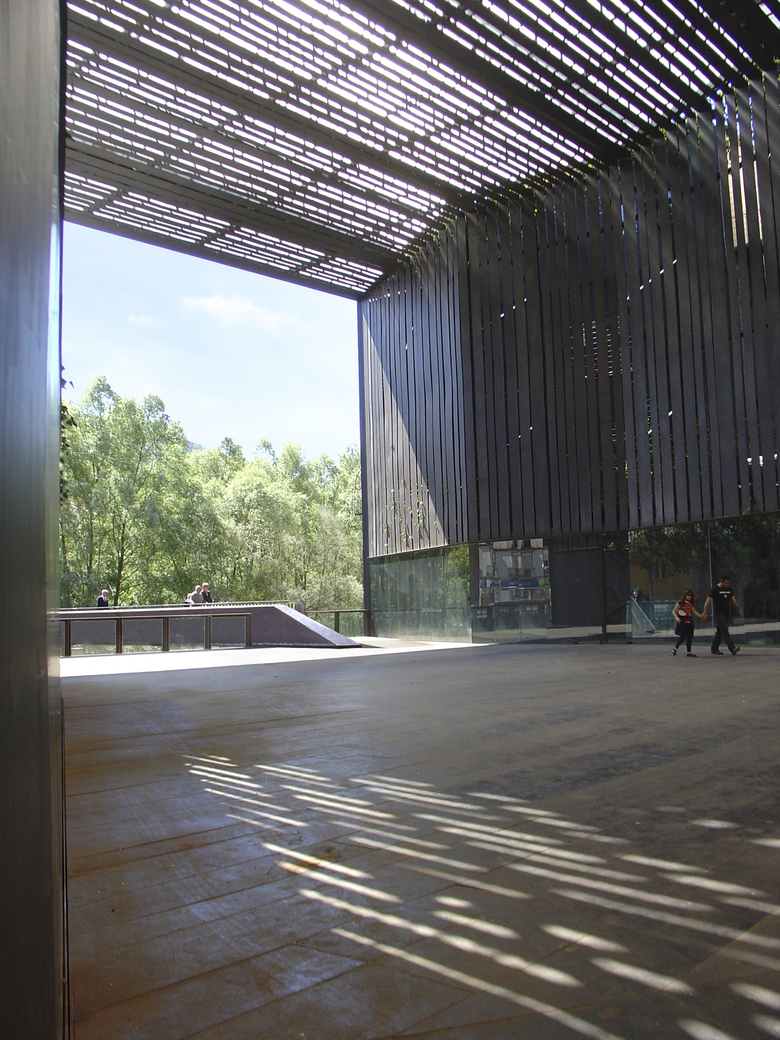 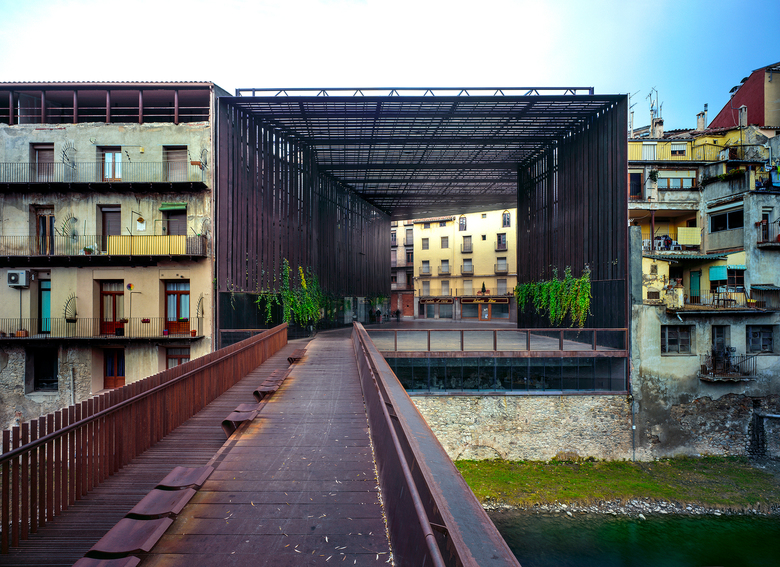 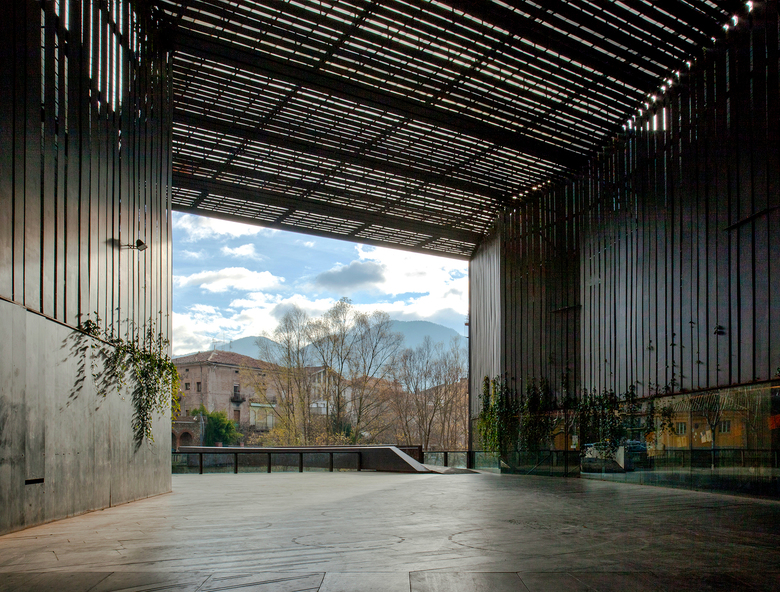 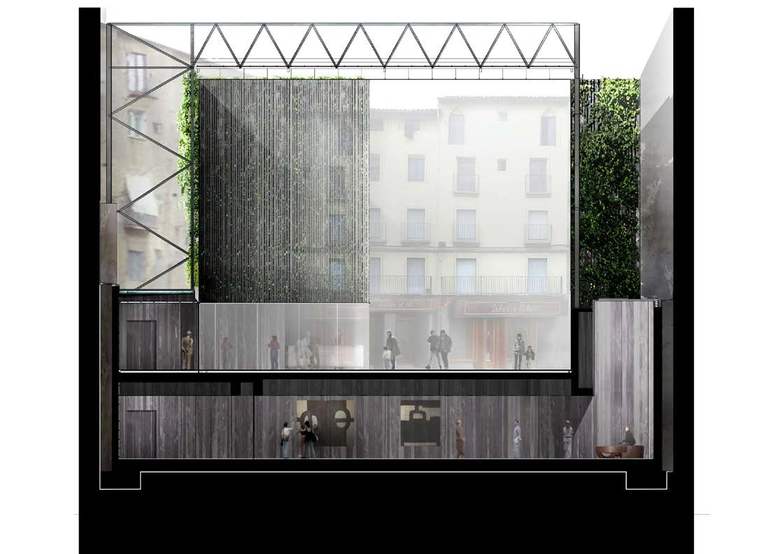 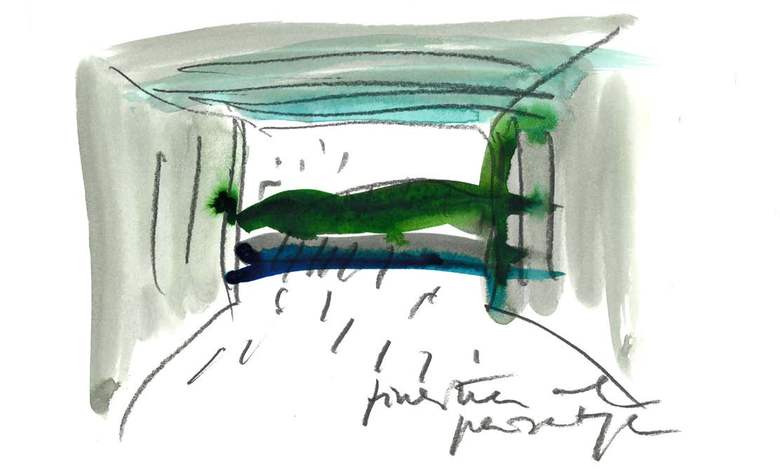 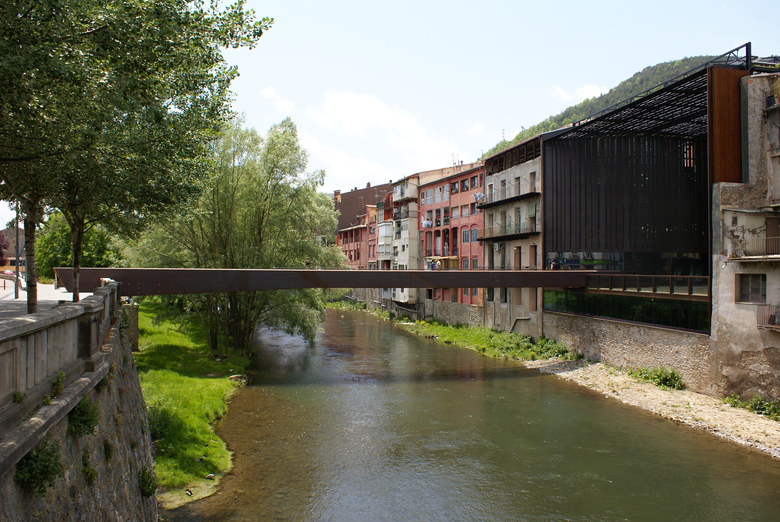 In collaboration with J. Puigcorbé

This public space has arisen from the demolished La Lira Theatre, from the street and a frontage on the Ter River, with its party walls open to view and the neighbours' ventilation patios, striving to be a square under cover, a meeting point for debates and festivities. A high roof sieves the light and descends down the sides, colonised by ivy. A walkway anchors it and crosses the river. The balcony overlooking the Ter River, a wall that consolidates its bed, encloses a multi-purpose space which is reached from the square by walking down a stairway. The spirit of the theatre remains. Ripoll, crossing of the two rivers Ter and Freser, used the energy of water flows to forge steel and be a reference in the tradition of the metallurgical industry - known throughout Europe as the "Catalan Forge." Leaning on the wall edge of the river Ter, the former cultural center theater "La Lira", later demolished, gets its public character back with an "empty" space, the square, evoking the great scenery that is filled with public life, a place of convergence, point of departure and arrival. An intern empty space, consisting of a single material: steel, which in a record of multiple hues goes from paving floor to threshold, cover, in a continuity with vibrant sides colonized by ivy and flashes of light. An interior of matter and vacuum rhythms, matter and light, which lead the movement from its flow. Open to the river, as a new gateway for the people to access the old town, the square is connected to the other side through a smoothly anchored footbridge that becomes, at the same time, a transition element and a place to remain, somewhere to sit down and feel suspended on the steady stream that marks the time. The balcony on the Ter, which is the wall set by the river bed, closes a multipurpose space to be accessed from the stairs that go down from the square to descend. A part of the city is reconquested, the void is opened and becomes public space. The public building creates Public Space, and finally the spirit of the theater remains.