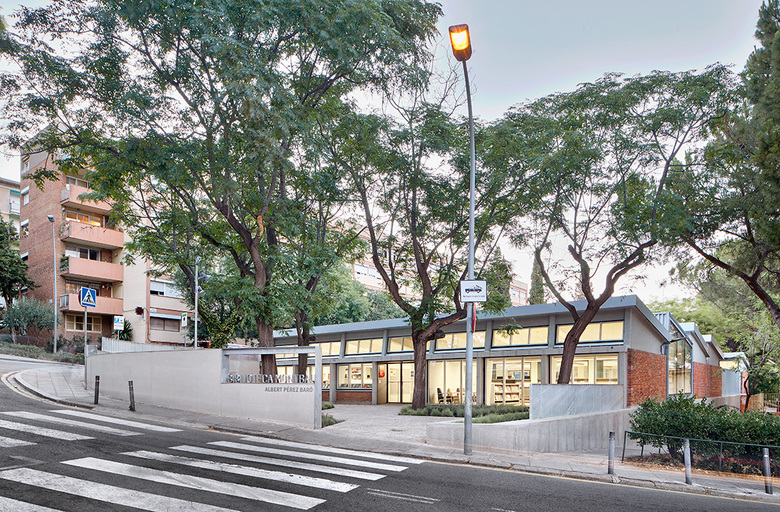 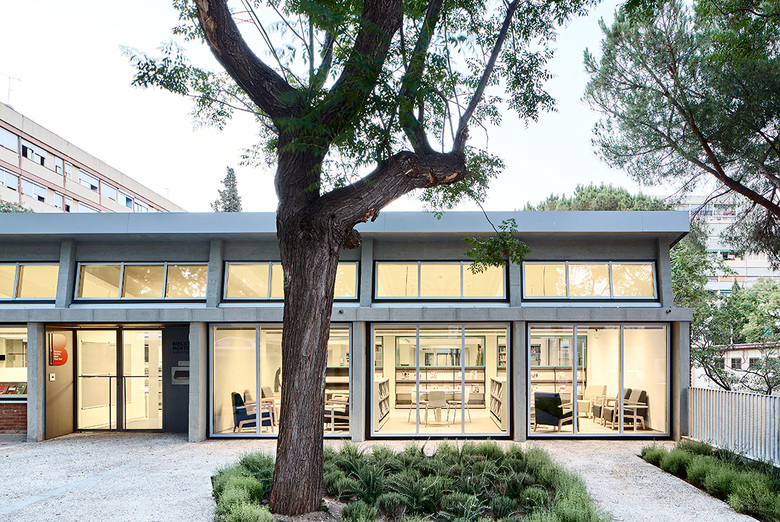 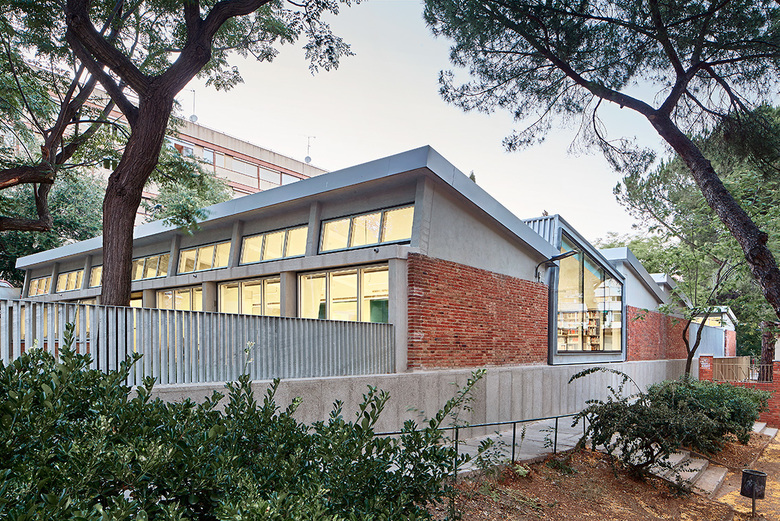 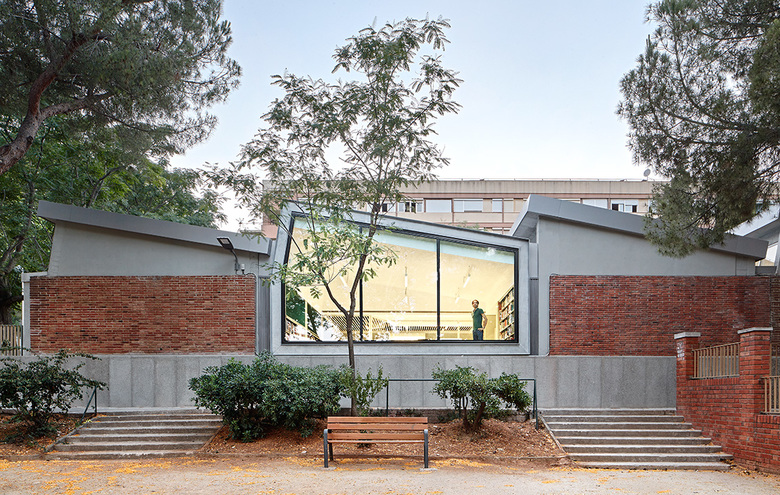 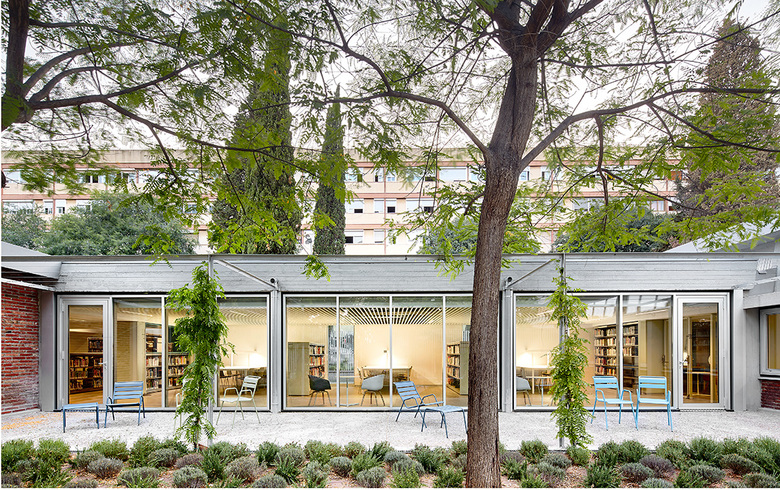 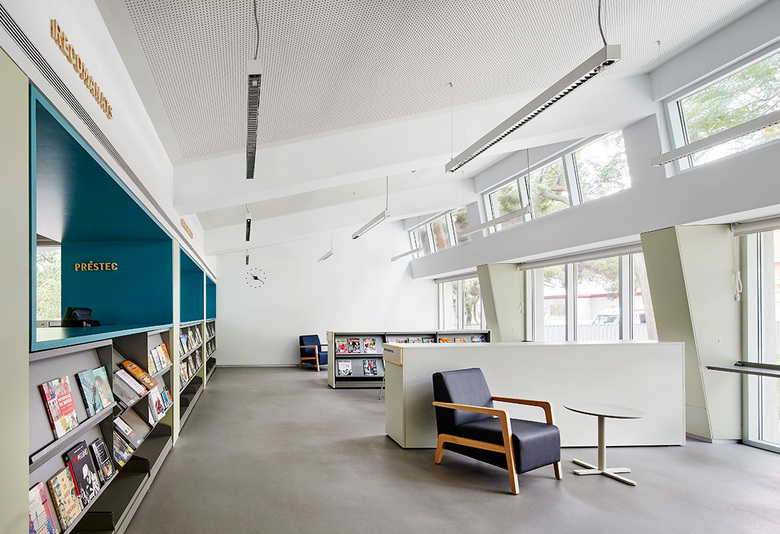 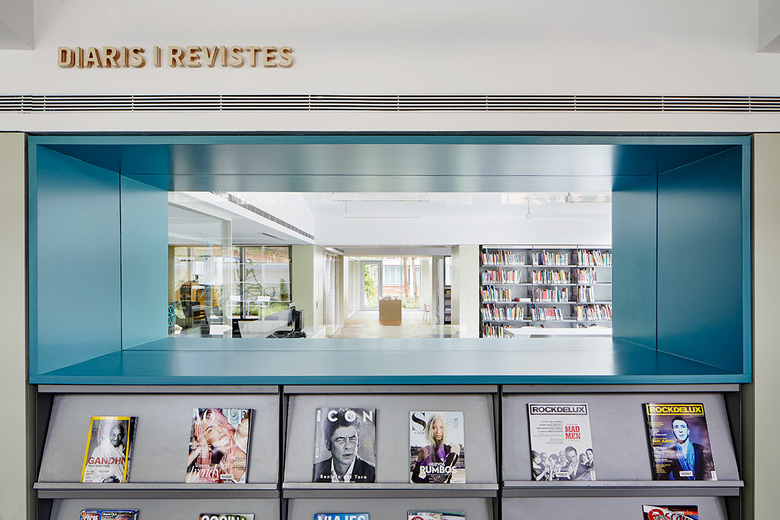 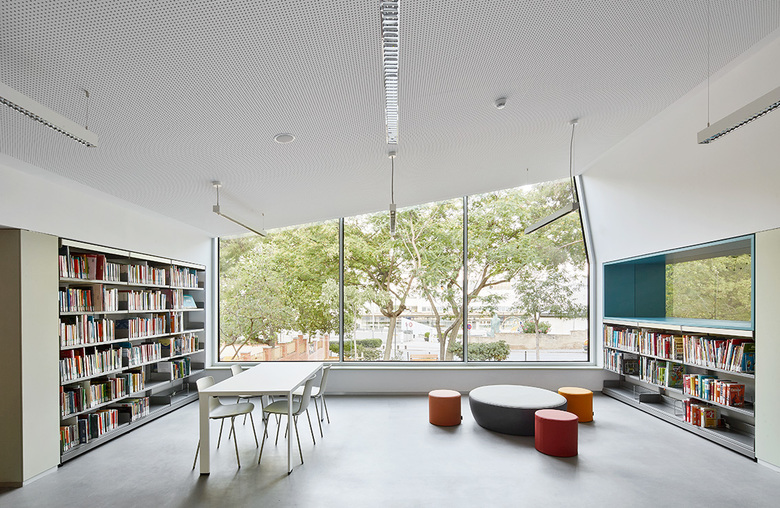 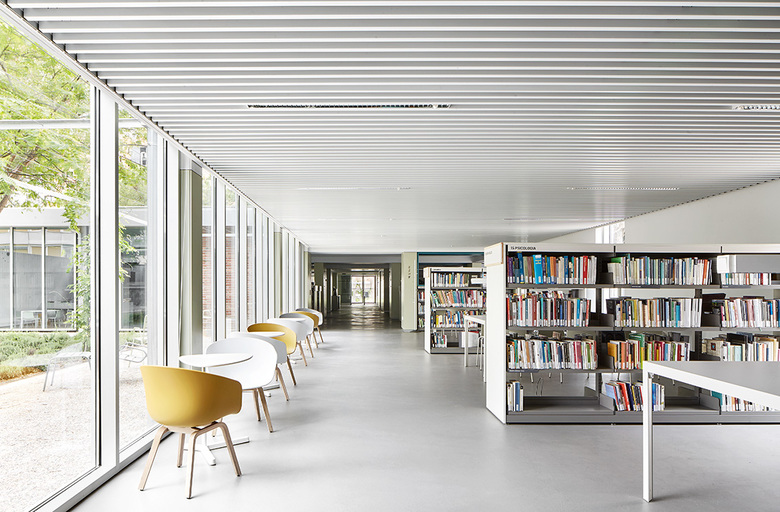 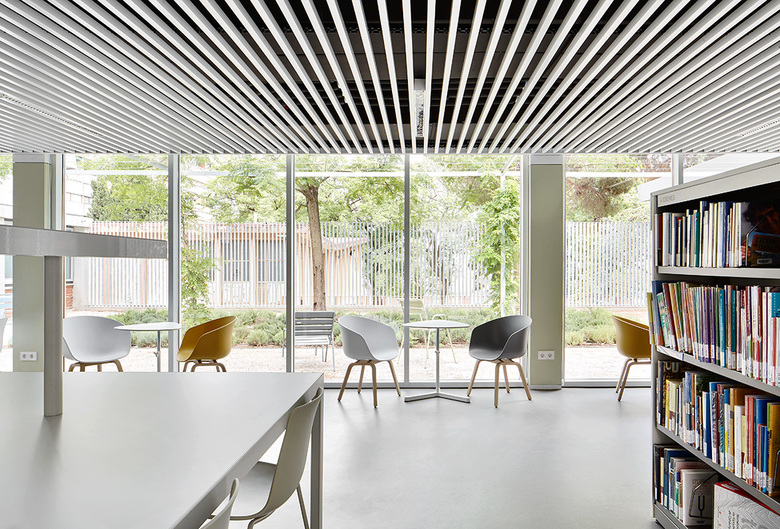 The Albert Pérez Baró Library is located in the Montbau housing estate. It was founded in the 1980s by the neighbours themselves as a popular library. Initially it occupied two of three former school buildings which had been constructed in the 1950s during the first phase of the estate. The passage of time and successive modernisation and extension programmes, which had often been barely integrated into the whole, had left the building in a state of considerable deterioration.

The project was based on the need to extend and modernise the library with two approaches up for consideration.

1. Demolish the existing building and construct a new one in accordance with the established plan and the new requirements.

2. Restore the existing library, enlarge it by incorporating the third existing building, until then used for other purposes, and build a new space to give it the desired size.

The available budget was quite modest and from the outset we recognised that there was a certain historic and sentimental value in the site. Despite its dubious heritage claims, it is one of the few standing public amenities buildings which was part of the original plan drafted by Giráldez, López-Iñigo and Subías. The local activism also gave it a strong symbolic value. After analyzing the pros and cons of the two options we chose for renovation.

The project deals with the renovation of the library and its enlargement to the required size. The expansion was achieved by incorporating the third building and by constructing a new space in the courtyard between buildings 2 and 3.

The operation chose to rehabilitate the structure and to recover the original appearance of the building by freeing it from the additions accumulated over the years. Removing the partitions from the interior allowed a reinterpretation of the spaces formed by the existing structure which shows now, for the first time, its true transparent nature.

A metallic structure was chosen for the new area which follows the geometry of parallel frames of the original. This new body spills outside through two large windows at either end which contrast with the opacity of the side walls of the existing buildings.

It was also brought up to date on energetic aspects. The exterior (the roof, walls and windows) was completely renovated in order to substantially increase the building’s insulation. All the installations were replaced to meet energy efficiency and savings criteria. The new machinery has been placed on the roof of the extension to be as least visible as possible.

On a functional level the main point of access was moved and a total redistribution of the different areas was carried out. The building was to function through a scheme taking the form of a spine with a central corridor which connects the different spaces to one another and the backbone is drawn from the different installations.

Inside, inspired by the original use of the building, the use of colour and materials has searched the return to a certain atmosphere typical of Nordic school types. Light steel and glass partitions were chosen to allow visual continuity between spaces and the different buildings.

The intervention on the landscaping, the courtyard paving and its perimeter fence provides transparency and encourages these spaces to be used for reading and outdoor activities.

Finally, the renovation of the existing small garden on Carrer de l’Arquitectura creates a new small square giving access to the facility which greatly improves its relationship with the public space and the neighbourhood.

The project represents the chance of a third life for this architecture which, having already been converted once before, highlights its strengths. The rediscovery of the interior spaces generated by the clear and powerful geometry of existing structure creates a completely new spatial experience.