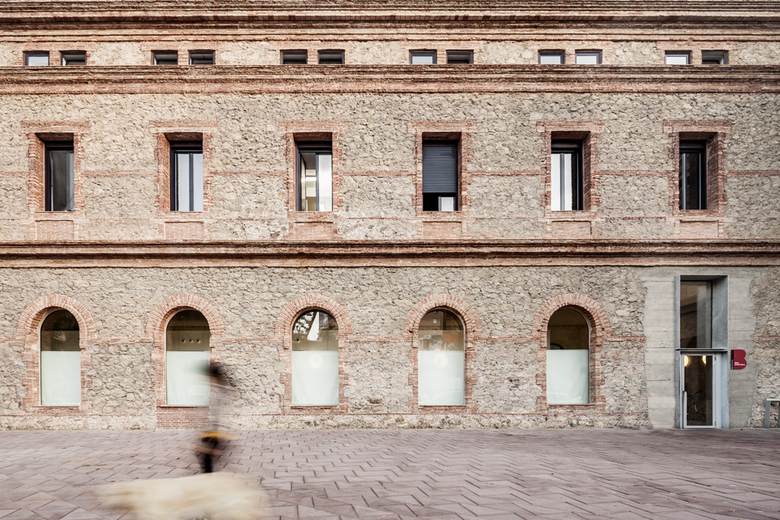 This project consists on refurbishing and extending an already existent police barracks, located in the former Santa Creu Mental Institute (1886-1910) and designed by Dr. Emili Pi i Molist and architect Josep Oriol Bernadet. At present, this building, due to its large size, brings together almost the totality of the municipal district services: district offices, library, technical services and the current Guardia Urbana (municipal police) barracks, in very bad condition.

The existent building is smaller than the original due to several demolitions throughout time, and consists on a mineral construction, with walls made of a ceramic brick and stone combination. The space is organized by means of a courtyard sequence, structured as cloisters surrounded by longitudinal and transverse spaces. Given the heritage value of the building, the project refurbishes the space in the ground floor and envisages a programmatic expansion through an underground building in the outdoor courtyard. In spite of burying this construction, the former autopsy room, with its hexagonal plant, is kept and located in the centre of the courtyard. Burying it reduces the visual impact that a conventional programmatic expansion would cause if a new building was placed in the outdoor courtyard space; it also grants a public space status to the newly created square.

Emptying the central courtyard implies supporting the existent buildings by means of reinforced concrete screen walls around its perimeter. These walls are braced using reinforced concrete walkways which connect the buildings around the perimeter with the central square. In turn, the square acts as the roof of the buried facility. The entire structure is made of exposed concrete and all exterior walls are lightweight. External finishes are made of galvanized steel, whereas internal are made with paintable MDF boards. All external woodworks are made of laminated pine wood.

Regarding its uses, the project maintains the more public program in the ground floor, and relocates the more private premises of the barracks, such as offices, dressing rooms and meeting rooms, in the buried building, located in the centre of the courtyard. The old hexagonal plant building is reused as a skylight for the buried building in order to ensure natural lighting access in the centre of the new construction. Regarding its perimeter, two courtyards with vegetation and trees are envisaged, offering ventilation, lighting and views to all continuously used premises.

Improving energy efficiency of the facility has been prioritized, favouring its passive behaviour in order to reduce energy consumption. The specific features of the building, such as the buried construction and the use of reinforced concrete for its structure, help distributing the internal loads of the building, thus reducing energy demand by the climate active systems. At a passive level, transverse ventilation has been boosted by means of operable openings in all work areas; also, the exterior envelope is designed to place all insulation on the external side of the structure, in order to maximize thermal inertia in the building.