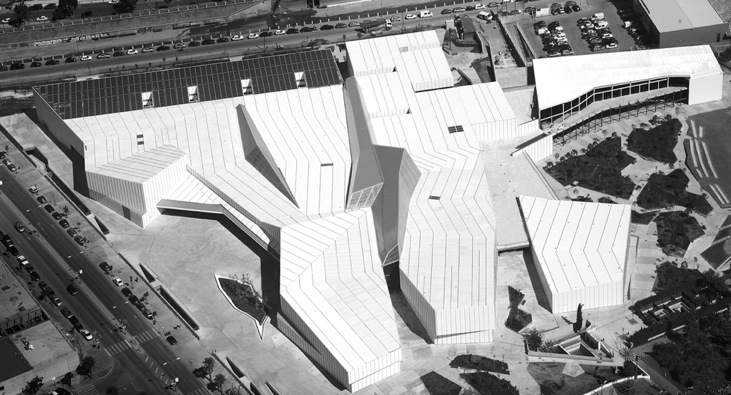 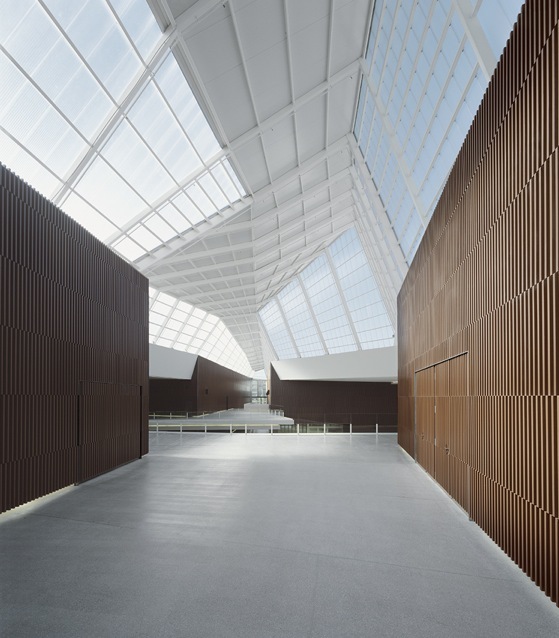 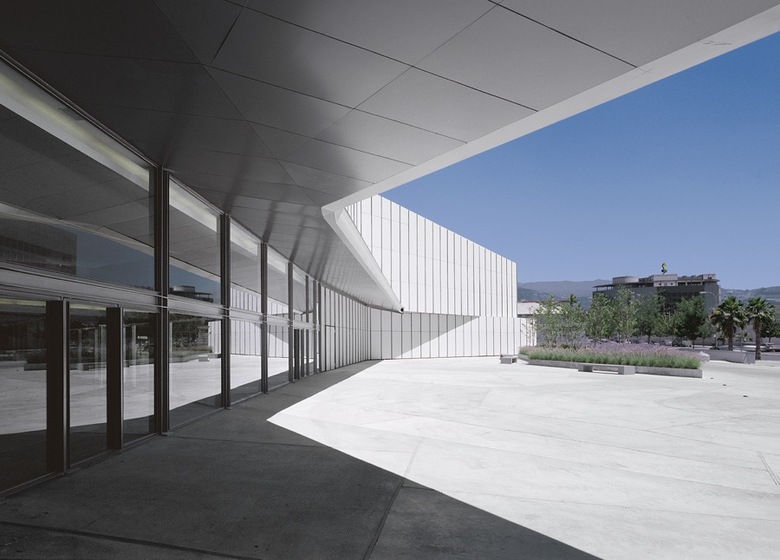 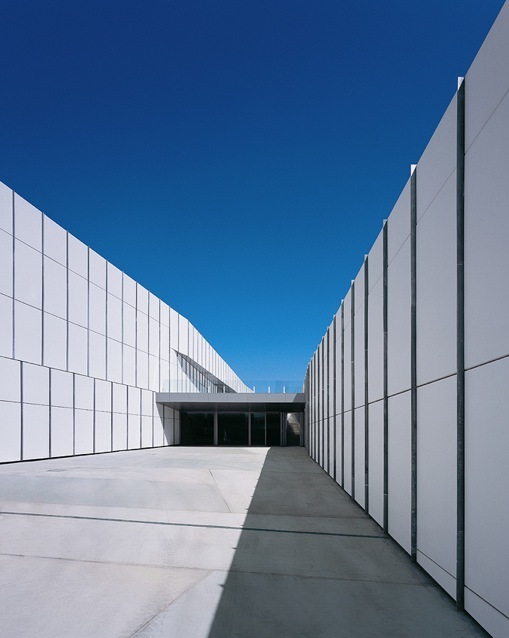 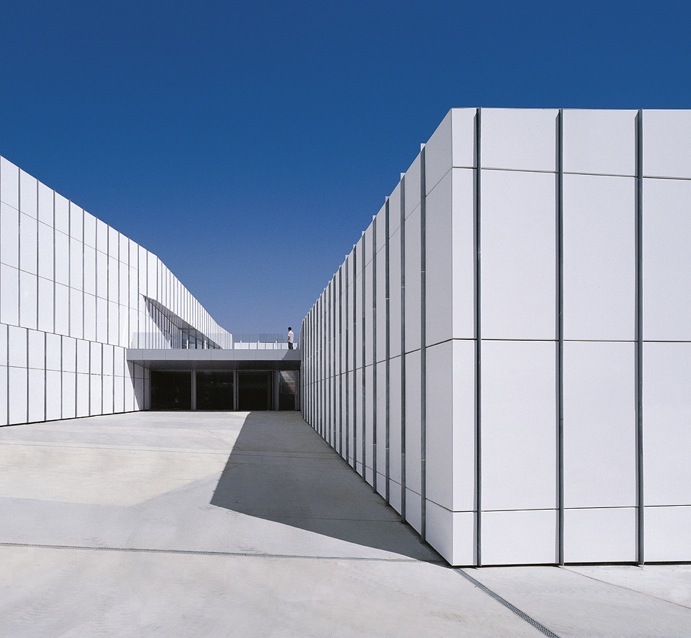 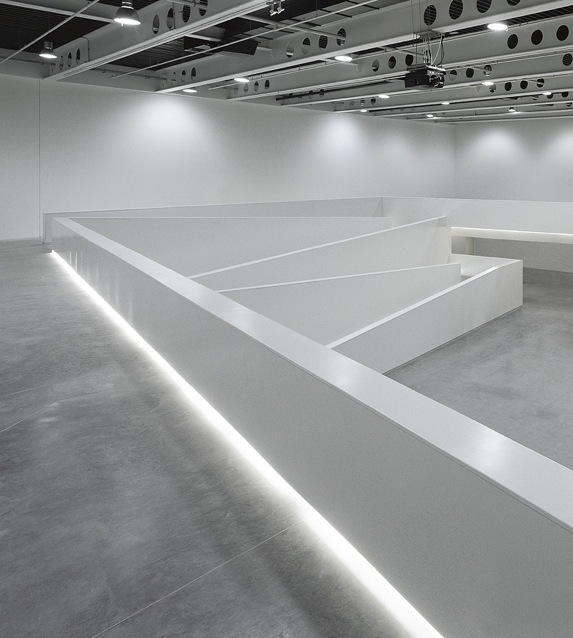 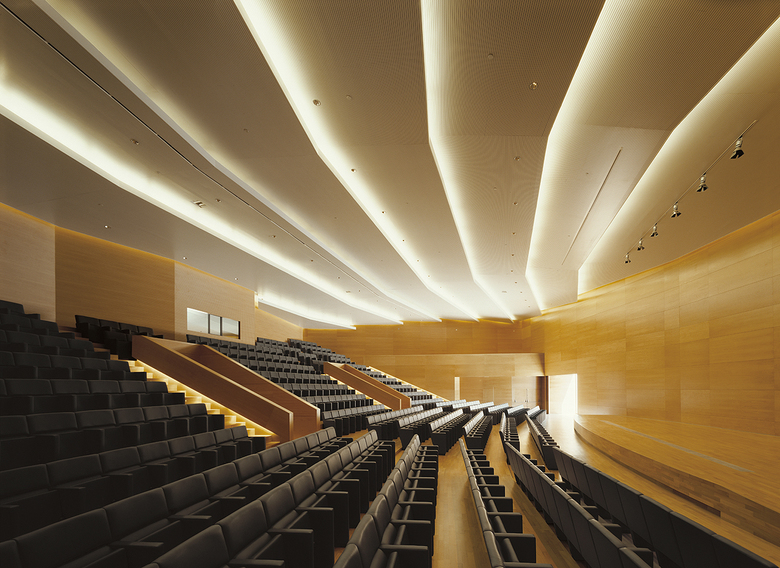 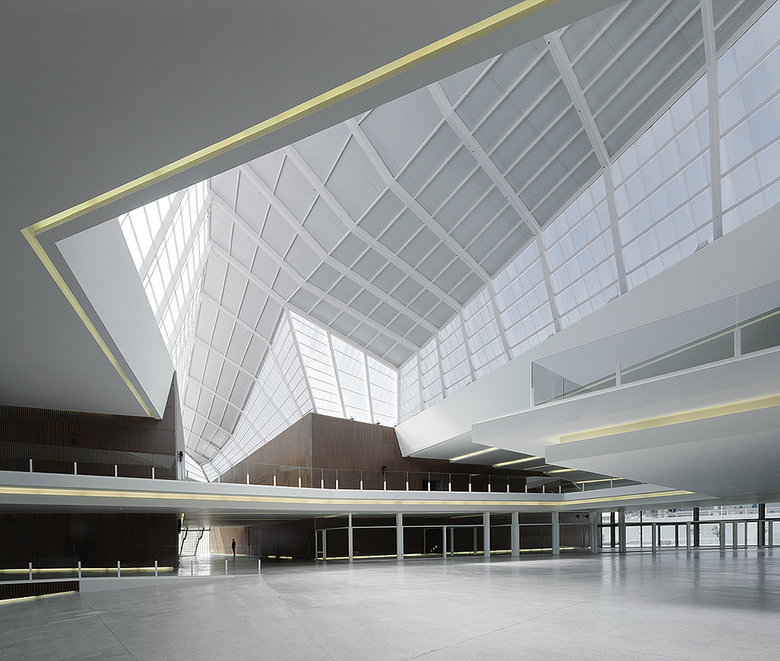 The first stages of the Project have been directed towards understanding the enlarging of the Science Park as an opportunity to respond to questions of an urban order which go beyond the Enclosure itself and help configure an area of enormous importance for the City. The relationship with the River Genil and the connection with adjacent spaces of centrality have been the mainspring of the urban dimension of the Project. From the first the latter dismisses the idea of a totem building installed “above the City” and pays attention instead to the various situations of the edges and points of contact with what already exists. These concerns have configured an organism housing the different types of space beneath a single roof which, with slight inflections and an outer skin resembling that of a hand, enables the Park and the City to occupy the intermediary spaces¾between the fingers¾which accommodate the components of the Program. The footbridge linking the opposite bank of the Genil is the arm that brings the City into the Park, a new pedestrian access that enmeshes with points of intense activity, encounter and meeting. A new way of traversing the Park “hors control” enables us to take in the Complex from a position high up and even to cross the VESTIBULE via the main Skylight¾while appreciating the space and the bustle on the inside¾which, descending towards the ACCESS PIAZZA, conducts us to the entrance into the building and the ticket office area.

The idea of interactivity is present in all the levels linking up with the Park. Spatial continuity and intensification of the interactive potential between Building and City are the Proposal’s main theme. The Enclosure shares its public dimension with the City by means of new urban routes that interconnect with the interior circulations. Just as the Park focuses its attention on the interactive displaying of its subject matter, so the Project provides all kinds of visitors with spaces in which to move with tremendous freedom, total accessibility and continuity. Discovering the potential routes among the many options will transform the user into the kind of interested and inquisitive individual who takes on an active role.

The spatial structure proposed allows for total flexibility of usage and for diverse configurations which interweave routes and subject matter. This entails converting the experience of space into play and fun. Intersecting glances, a rapport with the landscape and confined spaces succeed each other during the visit.

The idea of an “enigmatic box” awakens the curiosity and subtly displays its interior as an invitation to touring it in prolongation with the space of the street. A single undulating plane floats ten meters up and is sustained by the structure of the huge main boxes of the program, defining in its interstices the vast space of the VESTIBULE, a permanent reference for both interior and exterior routes, underlined by the low-angled light of the facade windows and emphasized in the heart of the building by the great glazed fissure identifying the Park at a Metropolitan scale. The main function of this VESTIBULE will be to lead and direct the visitor within the COMPLEX; it receives the flows from the ACCESS PIAZZA and the GREEN SPACE next to the River and places these in a relationship with the extended open spaces already inside the enclosure: the NATURE PIAZZA or BIODOM and the OBSERVATORY PIAZZA. Appropriated programmatic features intensify the porosity of the Complex at its edges: mini-cinemas, a cybercafe, cyberthèque and shopping areas are set out in continuity with the apron of public GREEN SPACE constituted in the Vestibule of the CULTURAL GALLERY, from where people can also go into the MACROSCOPE and the rest of the PARK. Accessibility is a basic premise of the entire system of circulations. Given its clear identity within the Complex, the SCIENCE IN AL-ANDALUS PAVILION helps maximize the interactive aspect between City and Park.  Its entrances are independent and avail themselves of the nearby public green space. Light is the main rationale for organizing the spaces. Four skylights over four courtyards determine the interior, configuring a flexible base for the organization of subject matter.

The public parking area of 400 places is beneath the ACCESS PIAZZA and CULTURAL GALLERY with instant access to the main roadway. Visitors connect directly and barrier-free to the main VESTIBULE of the MACROSCOPE, while also having at their disposal two exits to the outside which allow for their use as public parking. A parking space with exclusive access for the various chain stores is also demarcated. Maintenance and logistics vehicles have an interior circuit which starts at the actual vehicles entrance to the Ceama, extends between the BIODOM and Shopping Mall to the interior street linking warehouses and exhibition-mounting spaces, service lifts and installations annexes, and is continuous with the public parking area and access apron.

The new building becomes a genuine support of these contemporary dictates, which are obligatory in large-scale public projects. The choice of materials takes account of ecological criteria to do with technological innovation and energy-saving, favoring and simplifying maintenance and good conservation. A new urban plane is configured, the extended roof, as an abstraction of the furrowed textures of the Vega flatland. Sections of the roof are adapted for the capturing of solar energy, permitting air-conditioning costs to be optimized. Other sections are containers for material recycled from building work and other industrial processes: ceramic, plastic, glass, concrete and metal, which will be classified and processed in situ to become ballast and surfacing material.