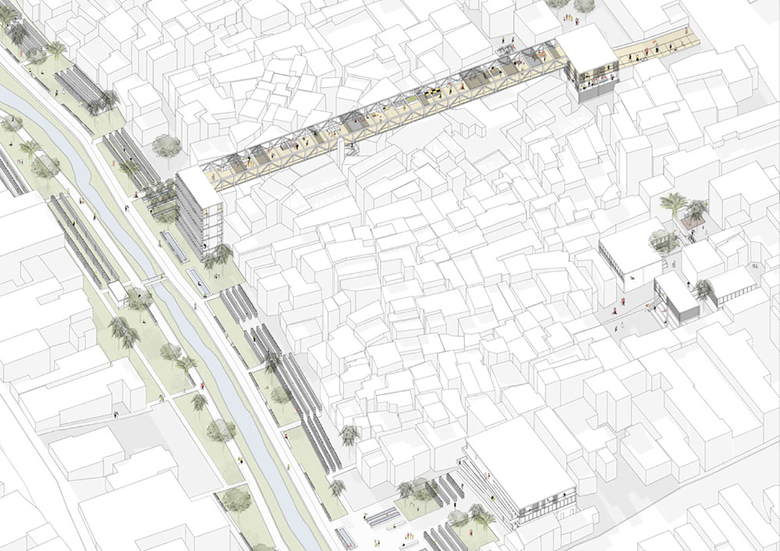 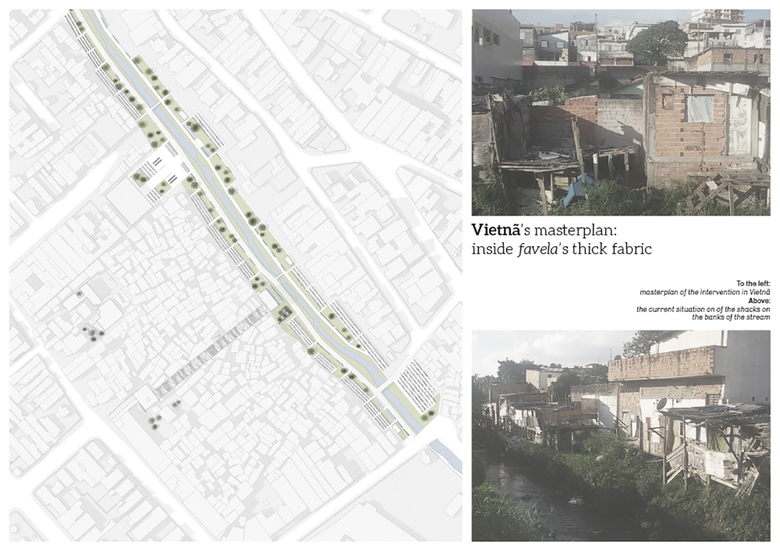 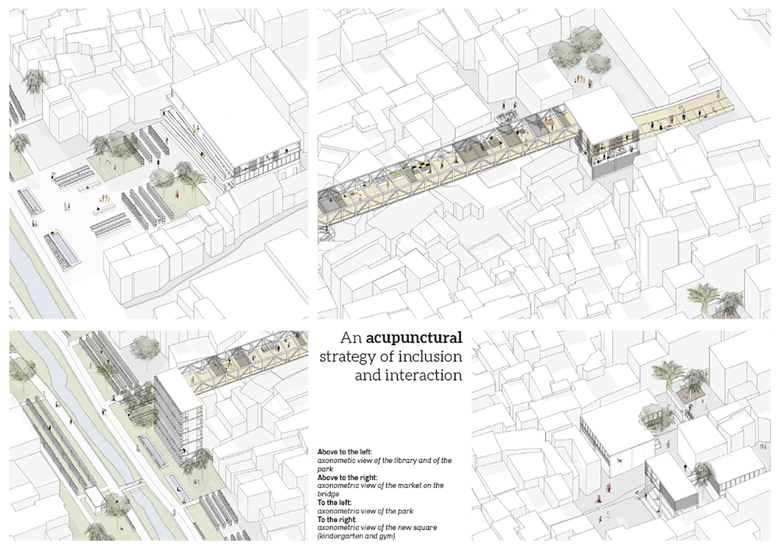 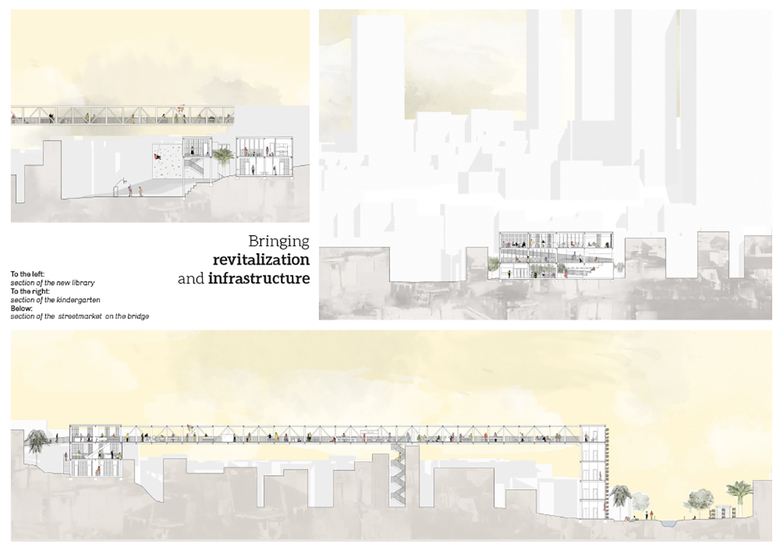 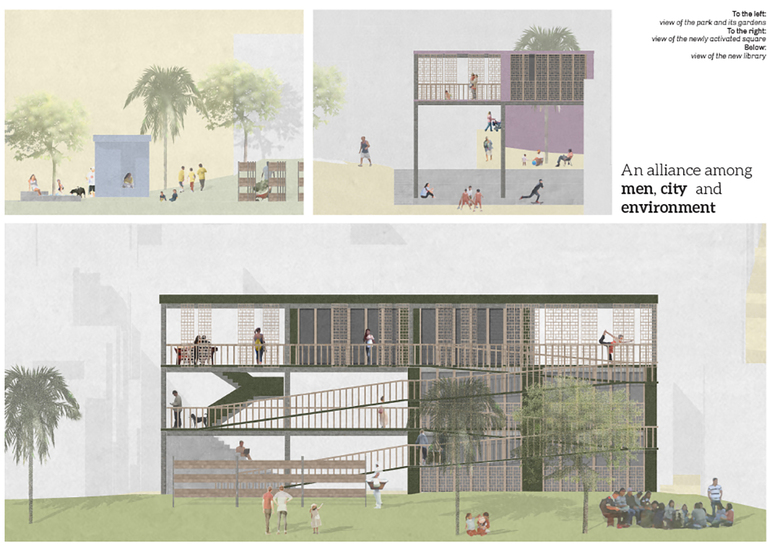 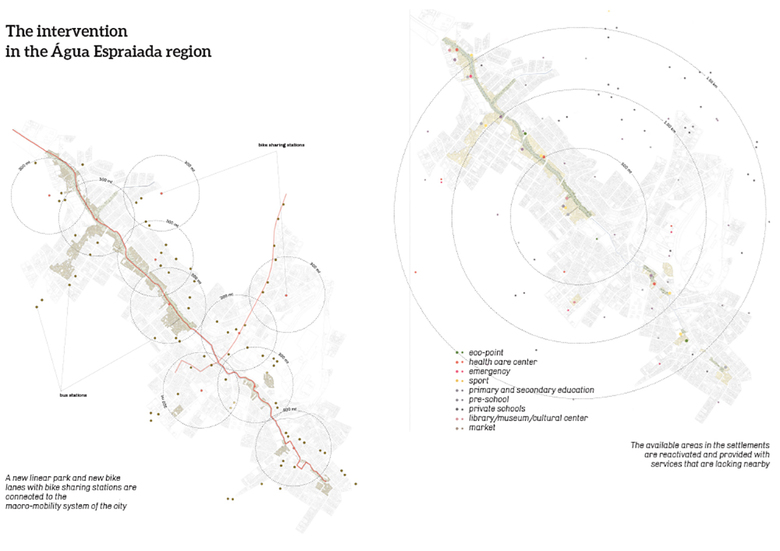 To the other side of the wall

The project investigates the possibility to connect informal settlements to urban fabric, private and public dimension, questioning the urban model of Brazilian cities. Focusing on the reconversion of Vietnã, an acupunctural strategy based on human scale aims to strengthen social identity and encourage an alliance between men city and environment.

In the XIX century the Brazilian economic boom affected São Paolo where urban outbreak found no boundaries and social marginalization burst. Working-class’ holdings were expropriated, residents forced to settle in the most suburban areas. A clear socio-spatial segregation resulted in the separation between official and unofficial city. So far, interventions have mainly focused on legal issues and minimal infrastructural interventions not taking in account the lack of public space. In São Paulo segregation and individualism have led to a poor quality of life. For all these reasons the project engages in developing more equal communities in order to bring about a positive change in our environment.

Água Espraiada Urban Operation, part of the Directive Urban Plan of São Paolo since 2001, establishes the construction of a new street that would cause the removal of over 8000 families. The alternative within the project consists in a thin linear park obtained through a minimum removal of most precarious shacks and new services activated in three empty areas at the borders of the settlements that, compensating for the deficiencies of the neighbourhood, can function as a link between these two urban fabrics. The buildings designed for the Vietnã are a market, a library, a kindergarten and a gym, that have a free plan and a modular economic steel structure adaptable to different uses. They are open to the squares where they are built, communicate with them and don’t overload space. Because revitalisation necessarily has to respond to the enormous infrastructural lacks, each of the new buildings hosts toilets and, with its lighting, contributes to the overall illumination. In the park there are gardens realised with over-layered simple vases, whose soil can also be fertilised by the biologic septic tanks that are placed on the park. Maintenance of the park and farming can give a boost to the economy of the settlement creating new jobs. The market is accessible through a building placed on the current main entrance to the community and continues on the connected bridge, the most characterising and controversial part of the project. This bridge could be seen as a way to overlook the taboo that favelas still represent but is instead conceived as a public and multifunctional infrastructure that connects two worlds, stage of junction, commerce and meeting. This method, applied to Vietnã, can be extended to other areas, avoiding removal as much as possible and rehabilitating the now empty spaces. A smart displacement can result in an area with autonomous production of food and for the promotion of new jobs linked to its maintenance and, if implemented on a large scale, this model could have a role in the cycling mobility imaging a green network that connects itself to macro-mobility of public transportations.