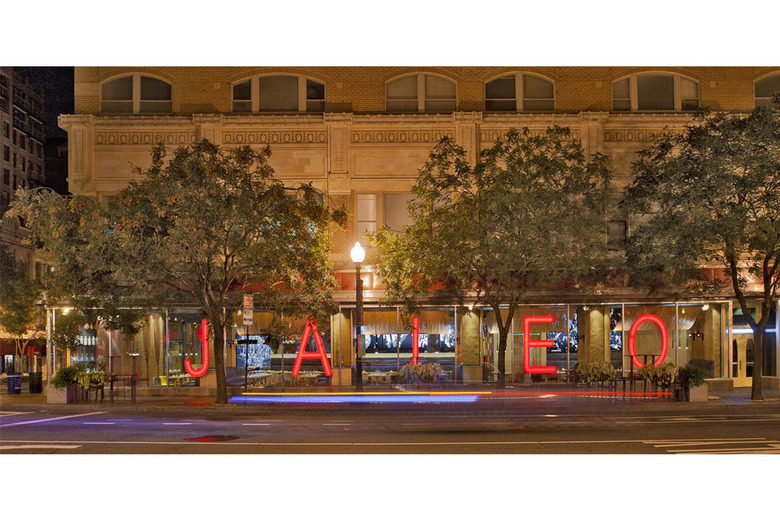 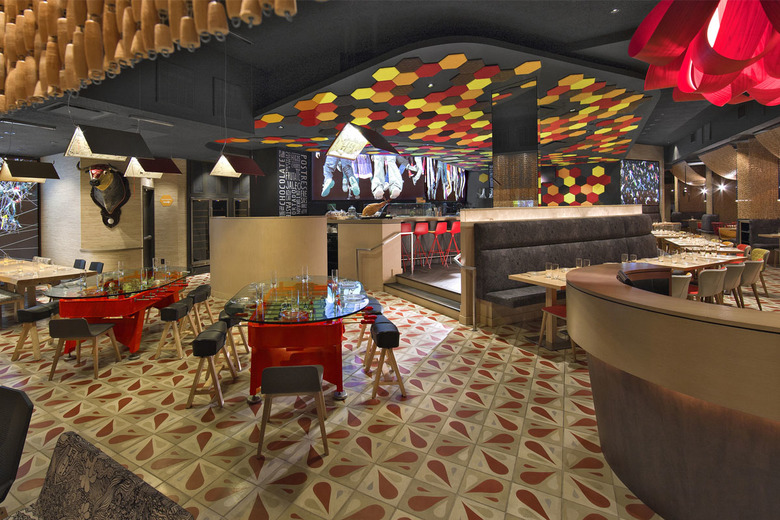 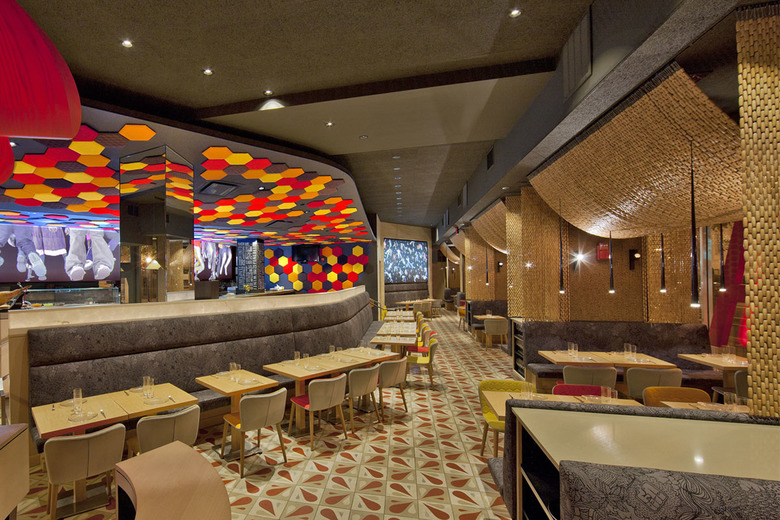 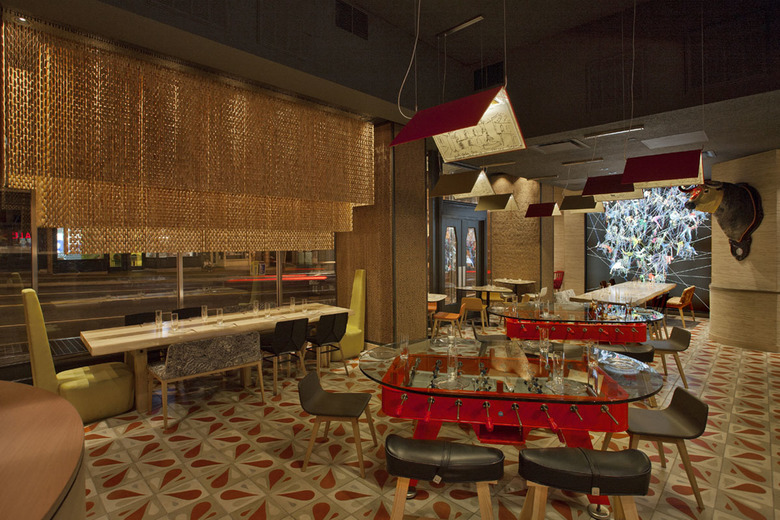 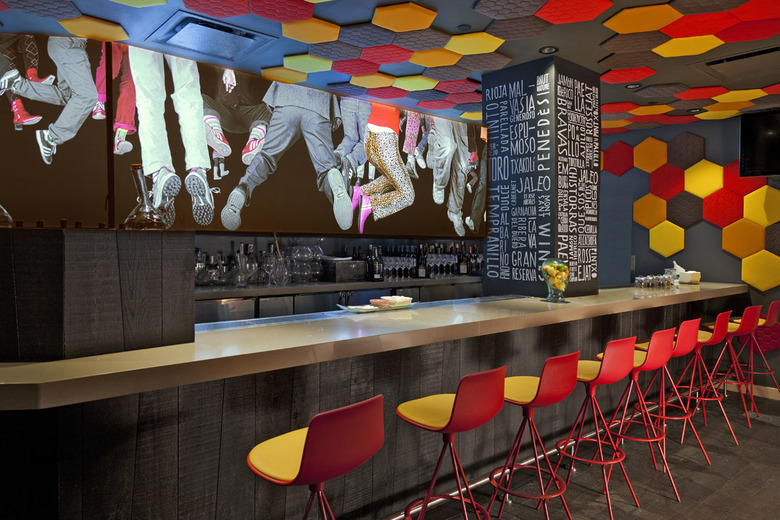 JALEO DESIGN – Jaleo is a Spanish word that means shindig, fun, racket, hubbub… It’s something positive, festive, good-natured. This is the aim behind the interior design of the new restaurant. The design of Jaleo is a mixture of the festive spirit and the particular personality of its owner, José Andrés, one of the most daring culinary creators on the planet.

The design of the new Jaleo is inspired by tapas, a traditional Spanish way of eating, which José Andrés updated for this restaurant many years ago. And just as his cooking has adapted to new international tastes, the interior design too has been updated without losing its original spirit. We should recall that tapas originated in Spain, when the tavern-keepers in the 18th century used to tapar—that is, cover—the jugs of wine with a slice of bread to keep dust and insects out and make the wine more agreeable to drink.

The proposal of the new Jaleo is varied, like a tapeo, a meal which consists of many delicious little morsel. So several different environments have been created: the first zone, near the entrance, is more informal and alternative, and can be used in a flexible, dynamic way. Another zone is more formal, with traditional tables and little private bays. And there is a more relaxed space to eat around the bar. The three settings and their various corners co-exist in a single, harmonious space, a magic box full of surprises, in a comfortable atmosphere. There’s a taster menu for all palates, where everyone can find their favorite niche.

Design from Spain – Is there such a thing as Spanish interior design? Since the 1980s Spain has made a growing contribution to creating a particular style in interior design and decoration; first there were the minimalist “designer bars”, later the neo-Baroque shops, and recently the coolest hotels and restaurants. In Jaleo we want to offer a setting that is authentic, genuine, natural, distinct from that forced sophistication that often cramps the user. We wanted to create an atmosphere that would be pleasant, popular and welcoming, just like the people of Spain. An informal space, with daring colors and shapes, with a streak of craziness and irony, with a touch of Mediterranean surrealism. A medley of artistic elitism and the most easy-going comfort.

All the furniture in the restaurant, as well as the lamps, has been created by some of the best Spanish designers of the moment, and made by Spanish producers. They are fresh and original, fruit of an amalgam of the rich Spanish craft tradition and the cutting edge of new industrial design. For the new Jaleo, wooden bead curtains have been specially made in Spain, inspired by the traditional ones found in the countryside, which create a delicate play of light and shade, as well as a characteristic tinkling sound. Also the paving has been specially designed, with a tear-drop pattern in vivid colors, and it has been made using the “hydraulic tile” technique, a very old method used for traditional mosaics, revived here with modern motifs.

All-round art – Several works by Spanish artists have been placed in the restaurant. The head of a masked bull, a sculpture by the versatile Mikel Urmeneta, driving force behind the successful brand of clothing and complements Kukuxumusu, presides the space and welcomes you. And three works by Daniel Canogar, representative of the best emerging art of the moment, humanize the space and light it up. You are surrounded by his photographs on large illuminated panels like windows that look out onto a dream-like exterior.

So going into Jaleo is to enter a little museum of overflowing creativity, with pieces of great aesthetic quality that reflect the “Spanish way of life” in the heart of Washington. A perfect setting to chat, have fun, eat and drink in good company.

Going into Jaleo is like setting out on a journey through new Spanish design, avoiding stereotypes or folklore. It is not a copy or replica of an old-fashioned Spanish restaurant, it is not a reproduction nor an artificial clone, but is committed to 21st century innovation. An avant-garde setting that nonetheless does not renounce its rich Spanish artistic roots, combined here with American reality to bear special, unique fruit. Jaleo is a breath of fresh air, so that long-standing customers can see how their favorite restaurant has improved. And it invites newcomers to get to know one of the most original culinary propositions on earth—neotapas by José Andrés—in a genuinely Spanish, appetizing setting. ¡Buen provecho! — visually and gastronomically!