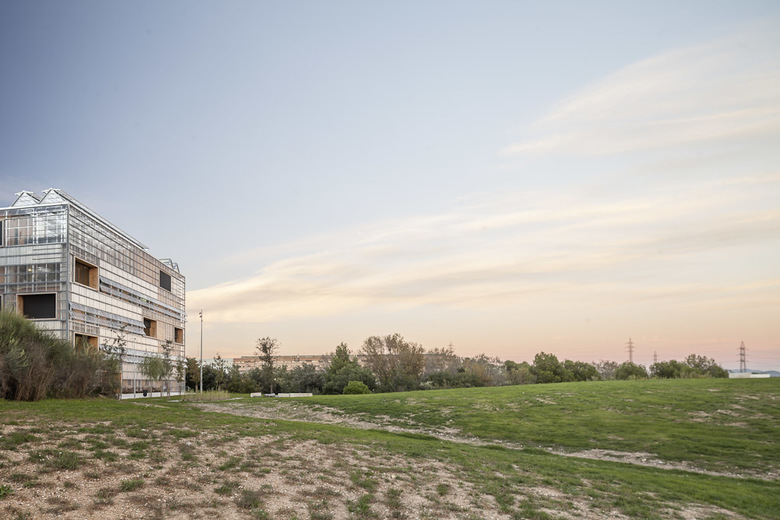 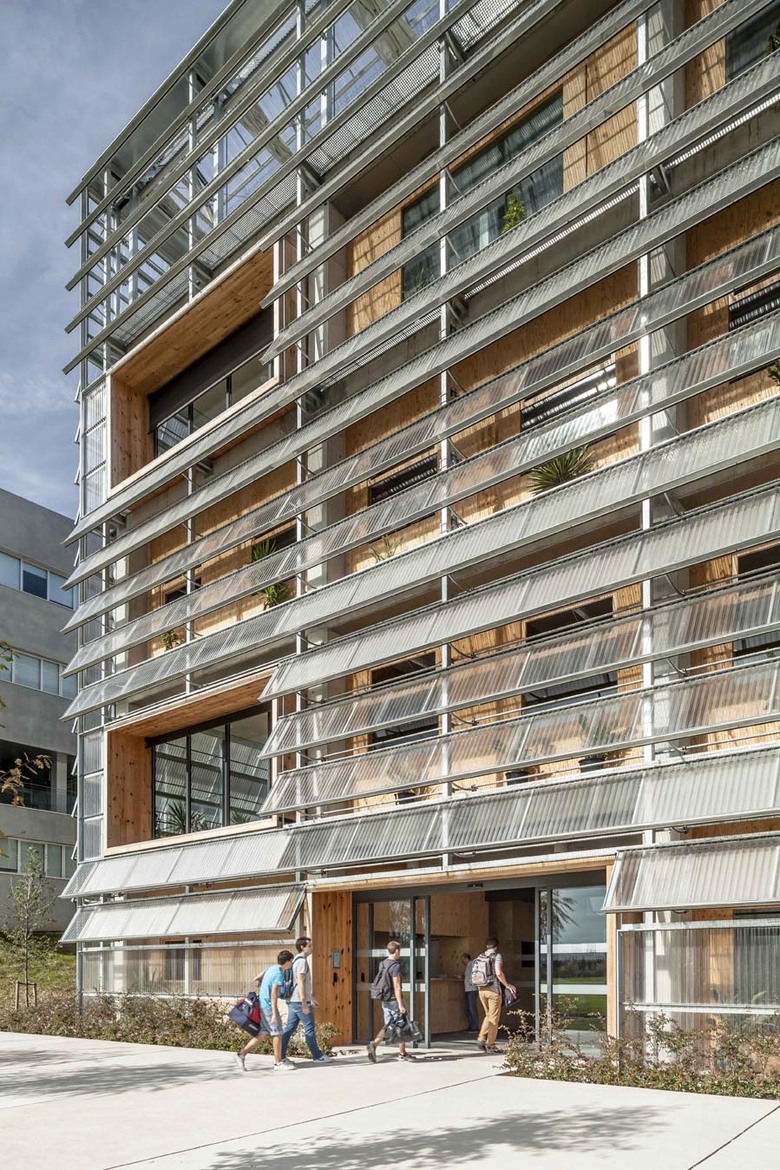 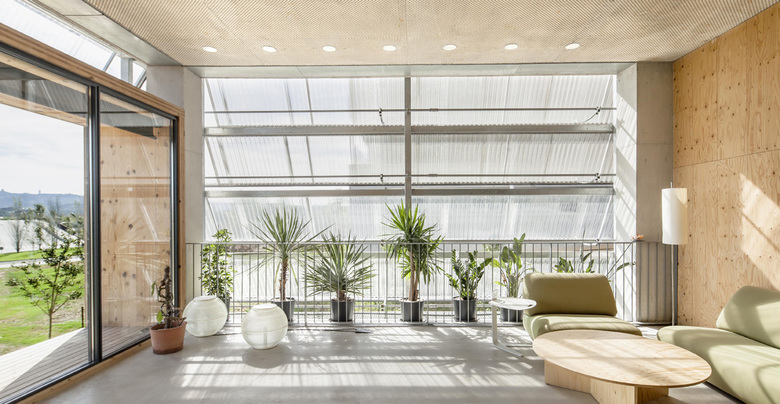 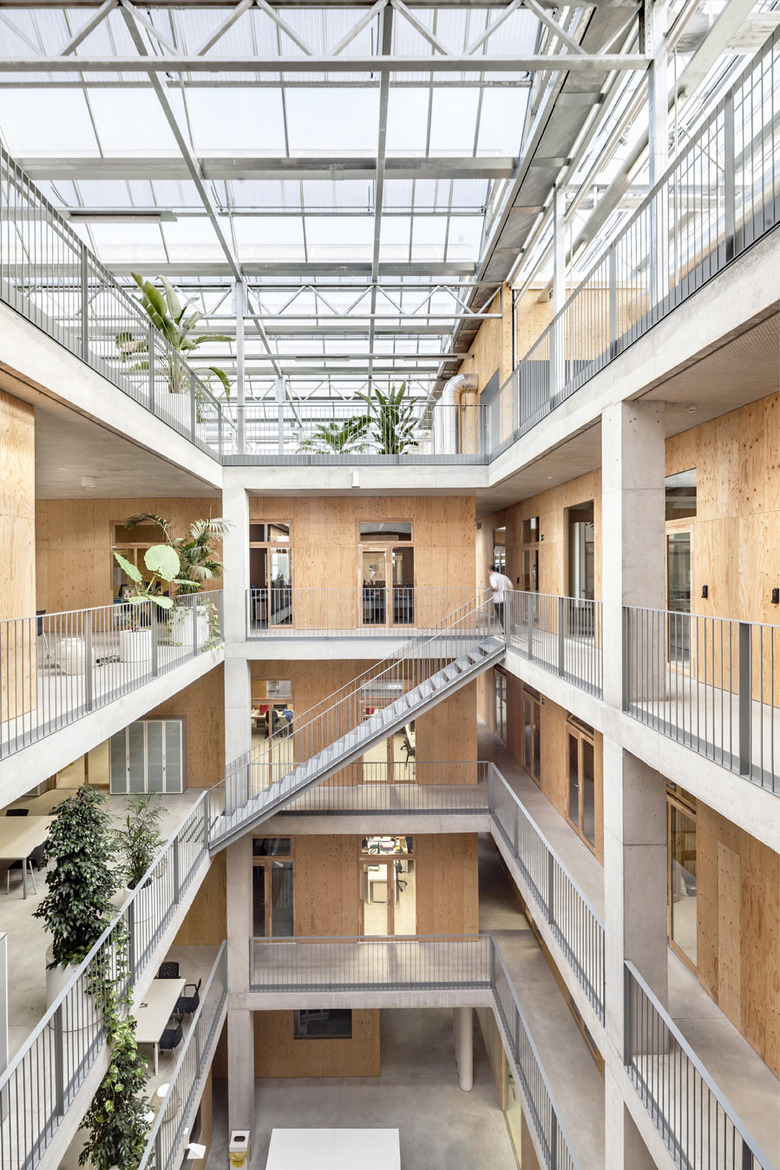 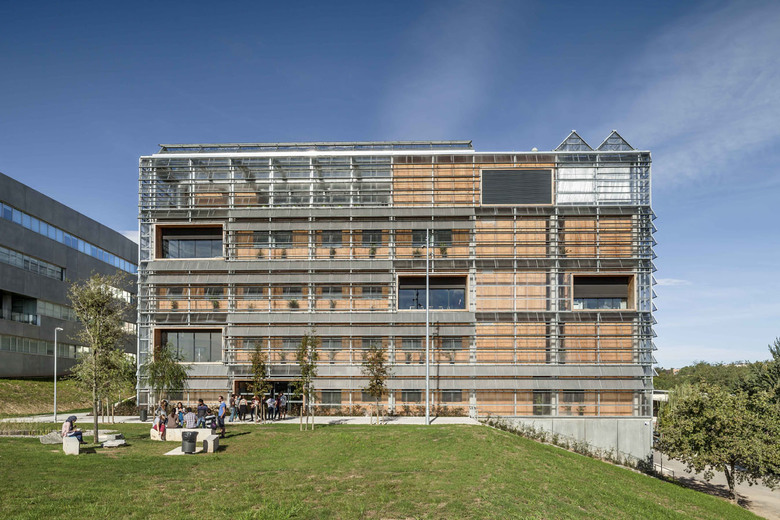 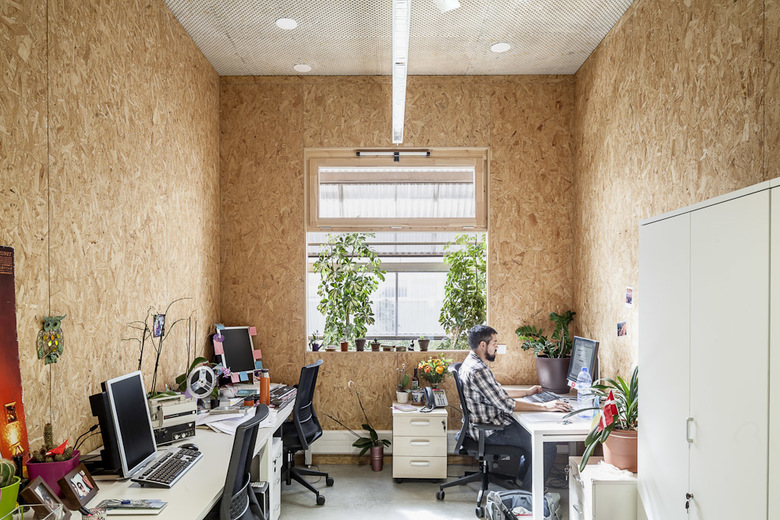 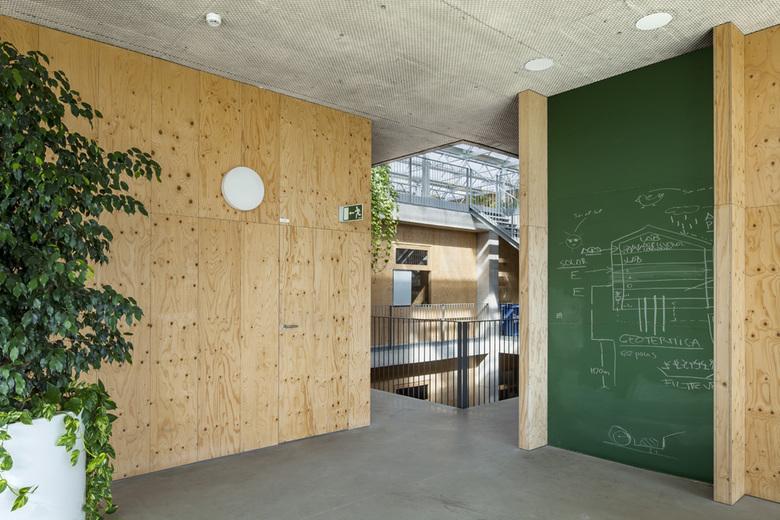 The ICTA-ICP building, located in the UAB Campus (Universitat Autònoma de Barcelona), is a research centre in environmental sciences and palaeontology. In accordance with the research fields of the building users, they bet, from the beginning, for a building prepared to give an ambitious response to the challenges of sustainability.

The building, an isolated volume of five floors of 40x40m2 and two basements, contains the following program: in the ground floor there is the hall, the bar, few classrooms and meeting rooms and the administration area; the next 3 floors hold on the offices and laboratories; on the roof there are vegetable patches together with the resting areas. The semi basement has the parking and the engine rooms while the basement has the warehouses and other laboratories.

Both offices and laboratories are spaces with a lot of internal load and therefore tend to be hot. The ICTA-ICP building has been designed to take profit from this internal situation in winter while it tends to dissipate it in summer. It has been thought as an adaptable and flexible infrastructure able to suffer changes of use, developing several simultaneous strategies that work complementarily.

A long life and low cost concrete structure with a lot of inertia has been chosen as the main structure, contributing directly to the passive comfort of the building.  The quantity of concrete has been optimized distributing its mass in favour of the thermal exchange. It uses a post-stressed concrete slabs with pipes in the central area where the air circulates, in order to build a lighter structure. At the top and bottom of the slab the thermal mass is activated by geothermal energy.

The concrete structure is wrapped and protected by a low cost exterior bioclimatic skin. By installing a greenhouse industrialized system that, opens and closes its mechanisms automatically, the solar gain and ventilation are regulated. This way, it is possible to raise the interior temperature naturally and guarantee a base of comfort in the circulation spaces as well as in the in-between spaces.

In the middle of the building four patios, with stairs that connect the different levels at certain points, guarantee light and ventilation in all workspaces reducing the consumption of artificial lighting. These patios, as well as the in-between spaces and the perimeter gallery, contain several plant species that allow to improve the comfort through the adjustment of the humidity gradient.

The building also takes advantage of the contact of the two basements with the terrain to pre-acclimatize the air renovations of the building: through both air chambers, the one generated by the support beam 'PI' and the one of the ventilated ground floor slab.

Inside this improved climate there are well-insulated wooden boxes, with practicable glass openings that help to achieve the comfort conditions of the workspaces. The distribution of these boxes is different in each floor depending on the needs of each user and it creates generous and indeterminate interstitial spaces. These links with the circulations and generates meeting and resting areas.

The building has been designed to host three types of climates associated with different intensities of use: Climate A: spaces in-between, that are exclusively acclimatized/heated by passive and bioclimatic systems; Climate B: offices, that combine natural ventilation with radiant and semi-passive systems; Climate C: laboratories and classrooms that have a more hermetic and conventional functioning.

Each type of climate has its own associated systems. The behaviour of the building is monitored and controlled by an automatic computer system that processes and manages an important set of information in order to optimize the comfort and the energy consumption. The system has been programmed in favour of the maximum passive behaviour of the building and to minimize the use of non-renewable energy sources. The building reacts and adapts constantly, opening and closing itself, activating and deactivating itself, managing to use all the natural possibilities offered by the environment; therefore the comfort perception is much more real, less artificial than usual.

A mineral material with a lot of thermal inertia and long service life has been chosen combined with a low environmental impact material for the secondary partitions. It has been a priority the use of organic or recycled materials and dry constructive systems as much reversible and reusable as possible

The building optimizes the whole water cycle by reducing the demand and consumption through the reuse of rainwater, greywater, yellow and waste water.