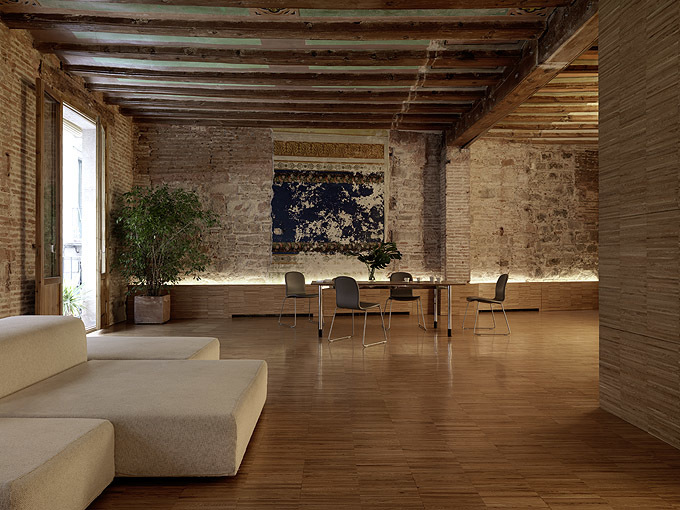 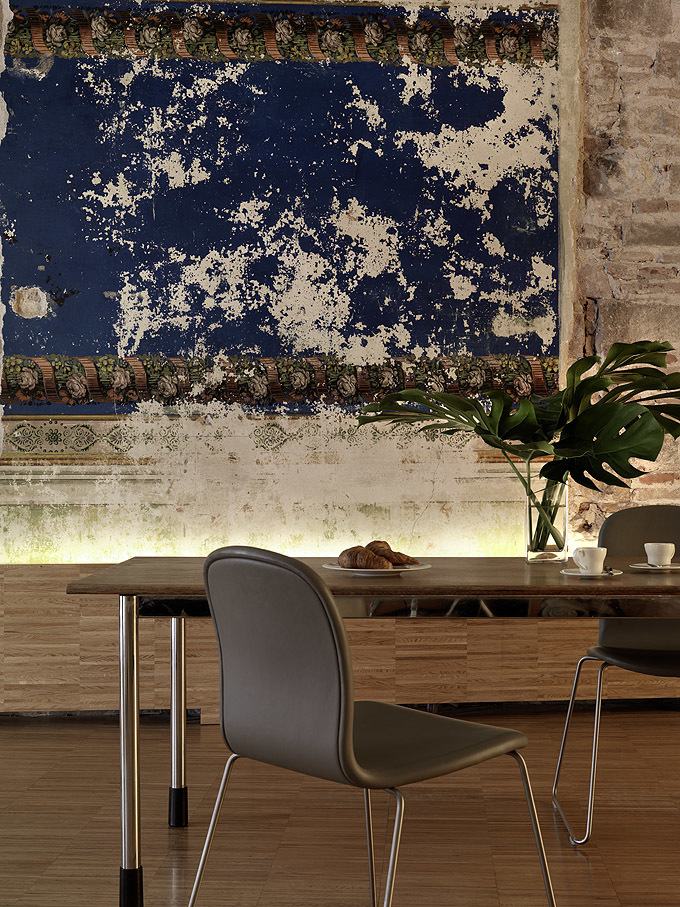 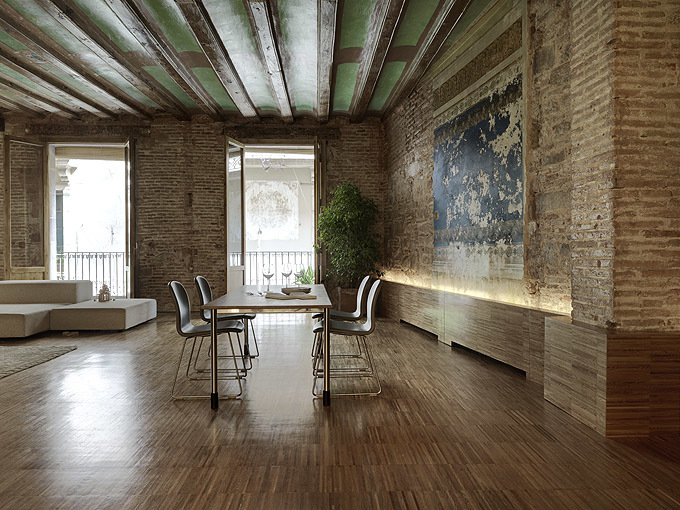 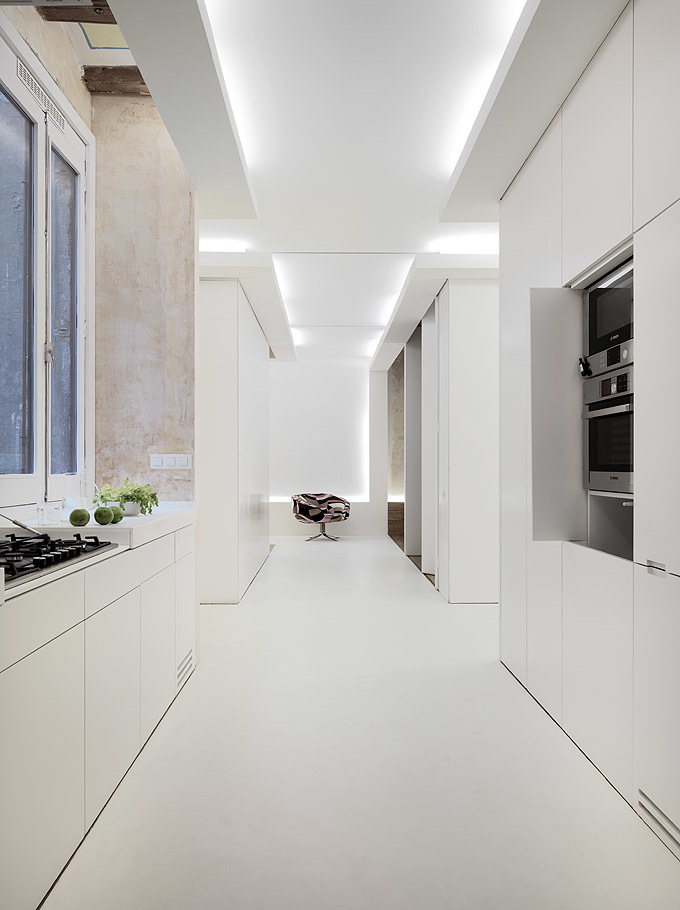 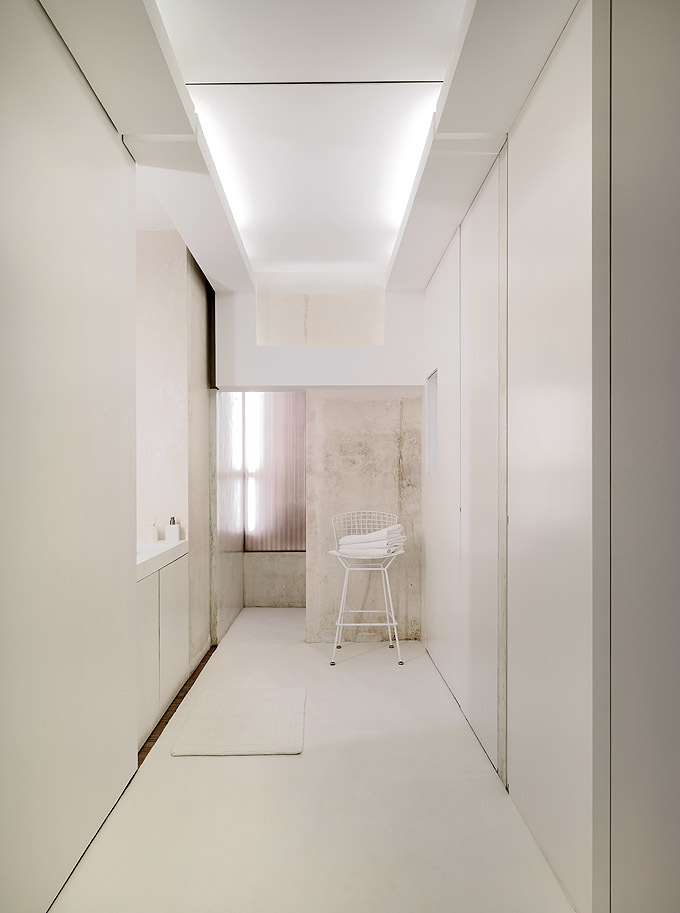 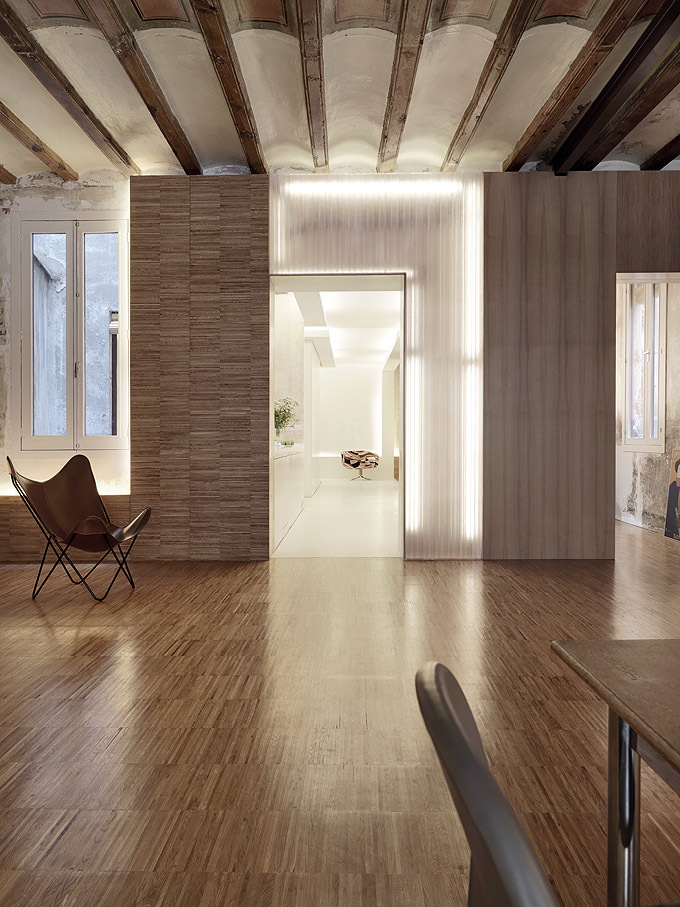 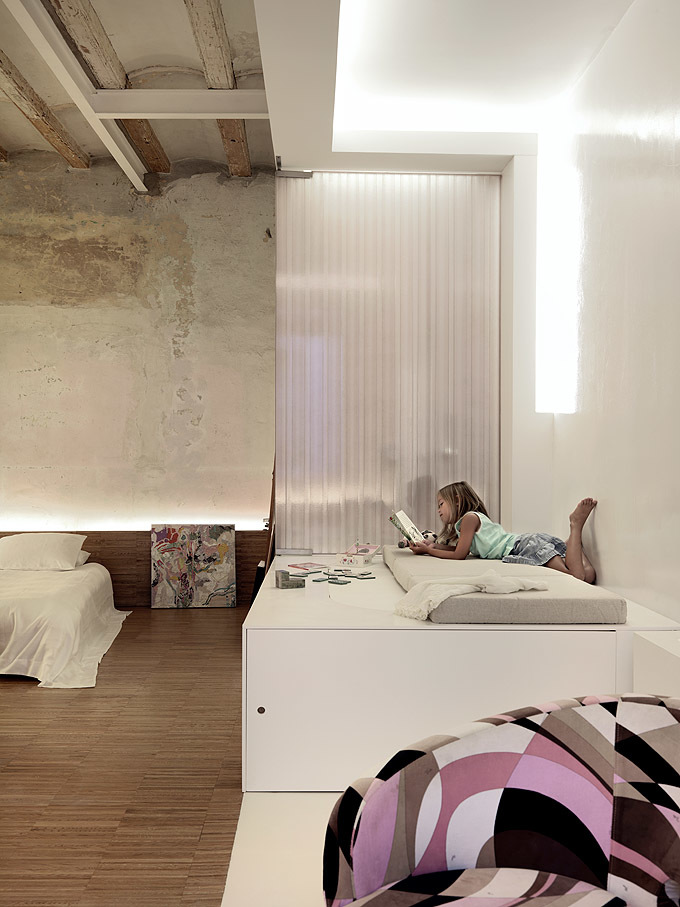 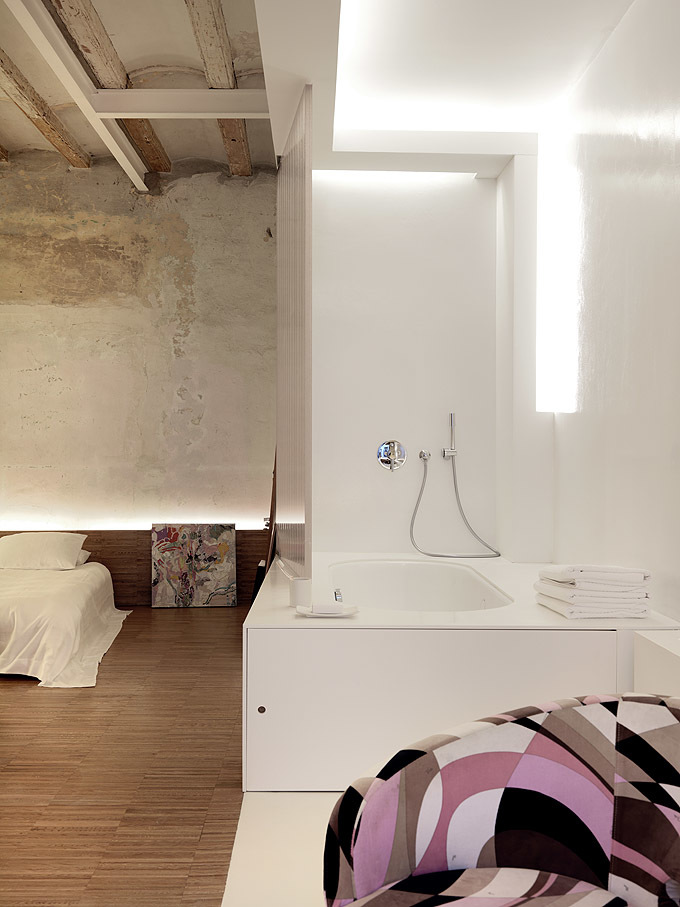 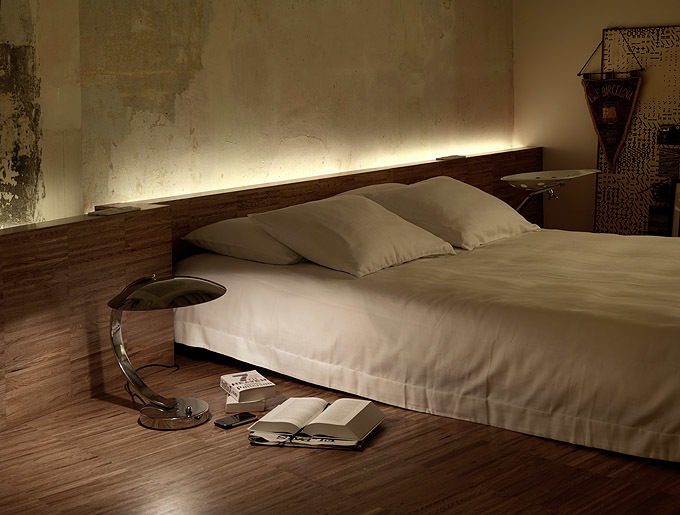 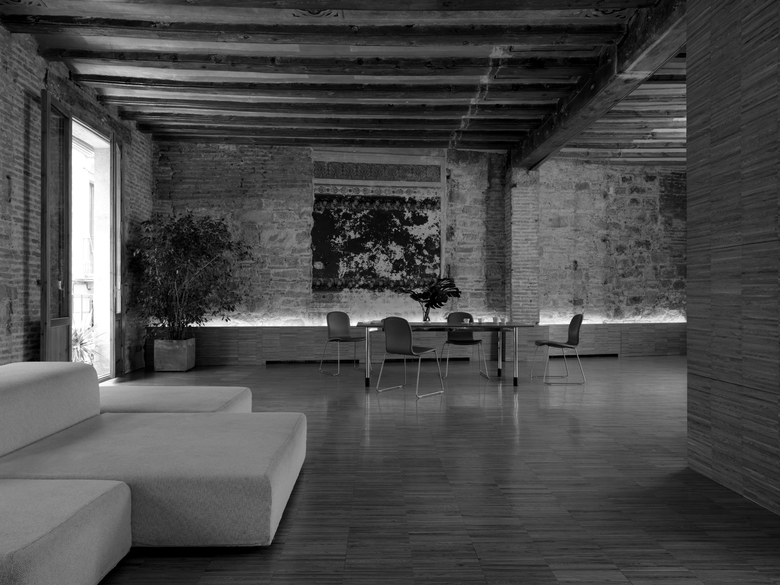 The project is our flat in Barcelona in the Gotico area, in the center of the historic part of Barcelona. A challenge was the very heterogenic floor plan, which was interrupted by various light patios. The other issue is little daylight in the old town of Barcelona, as the sun and the heat were considered rather a burden in the old times.

There is one major façade facing the street Banys Nous, with big windows and balconies.

It was clear that we would have a big living space in this area. For the connection, organization (circulation) and lighting up the back part of the apartment we had to come up with an invention:

Crossing two programs = the white cross – The invention was to cross two programs: the kitchen and the bathroom, two brightly light up white spaces, forming a white cross. The white cross we put between those medieval walls and created a bright center in the middle of these fragment spaces and light patios. The crusch alba (white cross) is a crossing of two programs, there is no circulation, no matter where, you are either in the kitchen or in the bathroom. The rest of the space, the walls and ceilings are left in its original state: raw stone walls, wall paintings and raw plaster finishes.

Intervention of layers - pictures of the old times – We implemented the white cross as a new volume in the existing space and created openings into this white space. We light up the periphery: the border between old an new. In that respect, the layer outside of the white cross becomes the outer space, generating pictures of ‘the old times’ like looking outside a window into another landscape. By coincidence, real windows appear in these openings.

We left all the old surfaces in the original state, just varnished them: painted ceilings, painted wallpapers, raw old stone walls of the Gotico and even raw plaster of the new building interventions. The overlay of layers of old and new with light in between emphasizes the lack of hierarchy of old and new. It’s the feeling of not finishing; keeping it urban and letting the process and time be visible that gives a feeling of freedom.

Space Machine – the spaces are not defined by walls, floors or volume – The apartment can be used as loft or as a three bedroom apartment. The white cross is physically and visually the center core of the back part of the apartment. The actual bedrooms and the bathroom can be divided by big sliding doors and are not defined by the cross itself. So the master bedroom space is part of in the white cross and part of the remaining old space (old layers). So the actual rooms are urban spaces, as they are part of various elements.

There is a major structural wall separating the living area from the white cross and the private areas of the apartment. Two door size openings and a window to a light patio are the only connection to the living area, dividing the flat in two parts.

We dissolved the original wall into a sequence of elements, so that the openings become in between spaces of things touching, rather than holes in wall. So the separating element becomes the connecting element, an attractor brought to life by light.

There are numerous options of how many bedrooms and niches we can create as bedrooms. The kids have foldable mattresses, so they can choose where they want to sleep. The kids are ‘camping’ in the apartment, with no fixed bedroom.

Urban space – horizon of light – The wooden volume we implemented on top of the old structure, the historical stone structure of the Gotico. Between the old layer and the new implementation there is always a horizon of light, expanding the space where normally it is the end of a room (periphery, where walls and floor meet). By creating the wooden objects we have no ‘floor surface’ but are walking on a wooden volume. There are no defined surfaces like walls and floors, but urban elements and volumes that we can use freely.

Program free architecture – As usual we implemented our tool of ‘program free architecture’, so the kitchen is not visible, but is part of the white cross. The children’s lounge in the bedroom is actually a bath, if you take off the top. The main bathroom is hidden by a huge sliding wall and only appears when you need it. The shower is in a corner of the white cross.

If a space is not used for a specific program, it is always available as living space or for whatever.

The flat is like a continuation of the urban space of the Gotico of Barcelona, with a space machine, the white cross, added on.