Studio Roman Izquierdo Bouldstridge is an architectural studio based in Barcelona. The innovation and the clear conceptualization of its work are a consequence of a permanent research to find new forms of expression. Its creative process starts from an attitude of pursuing the beauty of the simple, which tries to understand the nature of the existing space and its environment. The projects blur the boundaries between the artificial and the natural, giving rise to sceneries full of calm and harmony, where the interaction of light plays a poetic role.

The studio covers diverse fields of design, from urban planning and architecture to interior design and furniture. Roman Izquierdo Bouldstridge combines his professional practice with artistic experimentation. His creative sensitivity and Japanese influence are manifested through a warm architecture where nature, light and time merge into unique atmospheres. He graduated in the Barcelona School of Architecture (ETSAB). His professional career starts in the Japanese studios Junya Ishigami and Kengo Kuma. In 2014 he founded his own studio.

In the last years, his work has been recognized by prestigious international awards, such as the International Design Awards IDA and the Rethinking the Future Awards. He has also been finalist in the Society of British Interior Design SBID Awards, the World Interiors News WIN Awards and nominated for the Building of The Year Awards. Recently, the studio has been invited to participate at the Venice Architecture Biennale exhibition 2021, with theme Time Space Existence, and has been finalist in the Dezeen Awards 2020, as the Emergent Interior Designer of the Year. 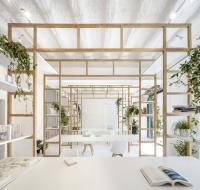