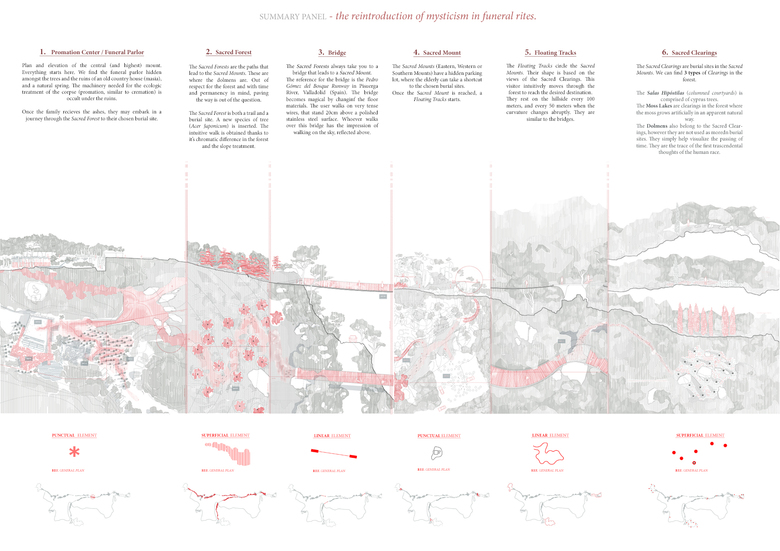 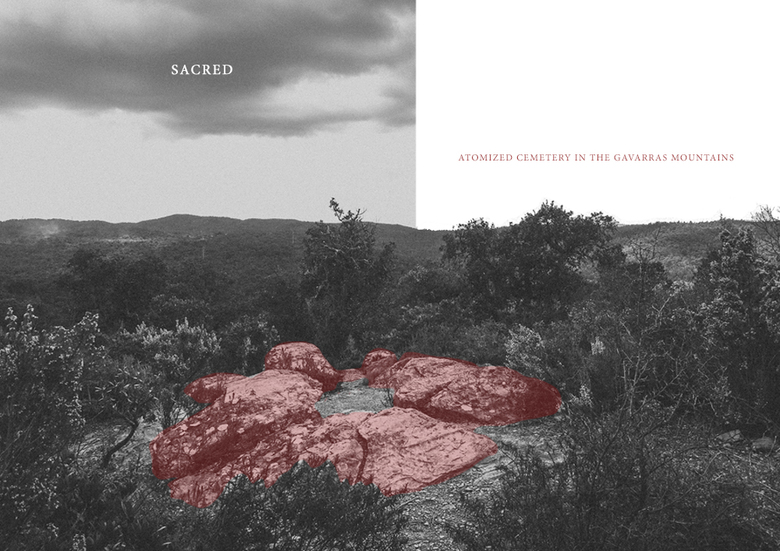 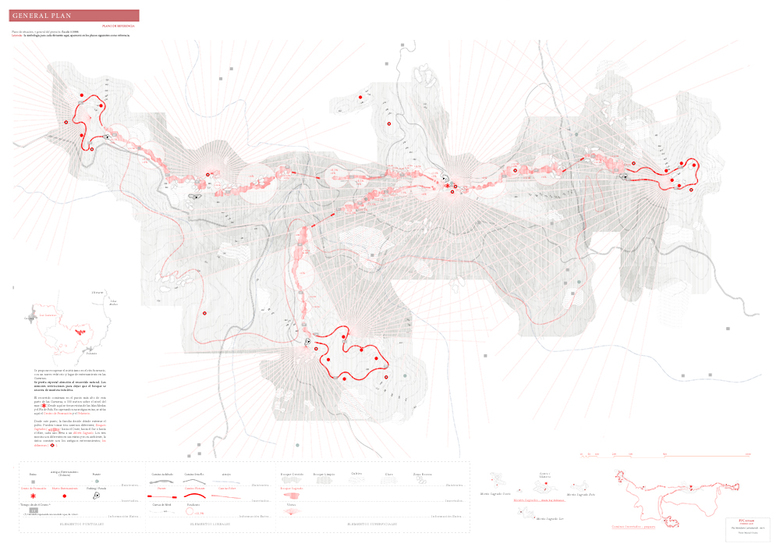 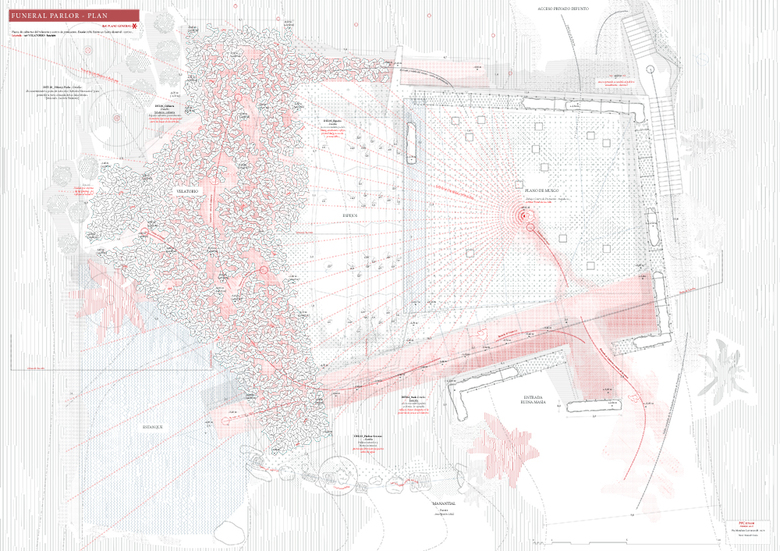 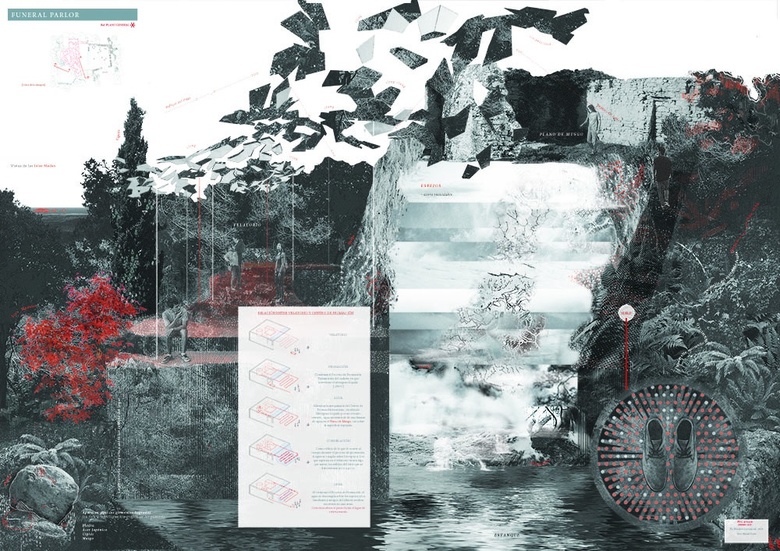 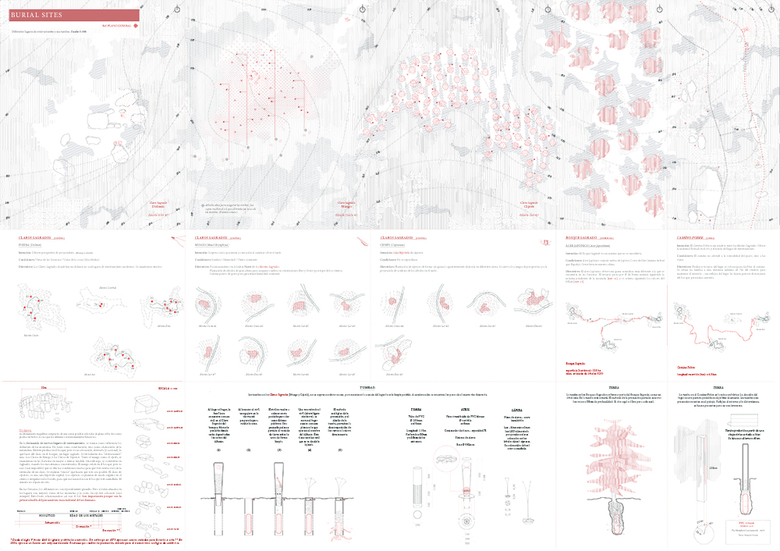 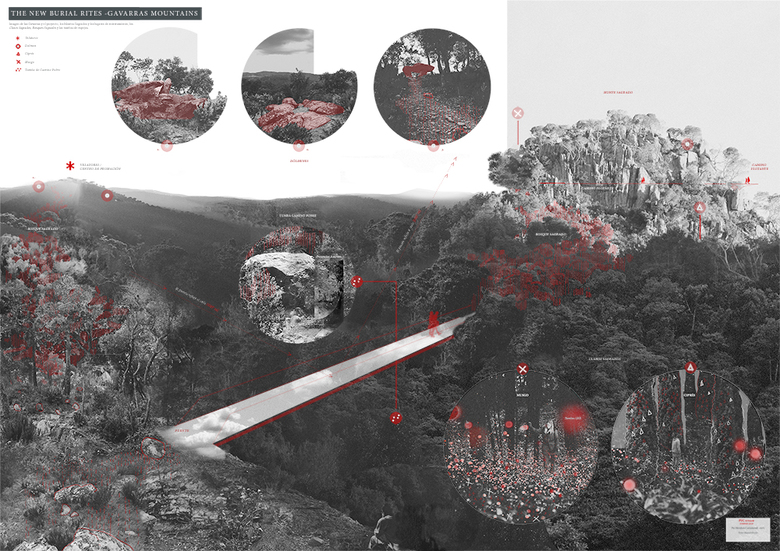 Atomized Cemetery in the Gavarras Mountains

"'Sacred' is an atomized cemetery in the Gavarras Mountains, Gerona (Spain). The project endeavours to bring mysticism back to funeral rites through pre-existing dolmens scattered there. The proposal intends to generate a set of sacred paths and architecture which the visitors follow instinctively."

My family has lived in these Mountains for years, which has lead to a deep emotional bond with the surroundings. Its this that has drawn me to conceive this project in them.

The Gavarras are magical. Their dolmens may not be as impressive as others, but their locations are. They are always placed in strategic points between the coast and the mountain range, seeking a connection between both.

In the project, carefully designed slopes, and seeding of specific plants create unobtrusive pathways to the burial sites. Specific pruning of the surrounding trees allow controlled views of the coastline.

The design studio asked us to create a useful space that dealt with a problem/issue along the Mediterranean Coast. I started designing Sacred that semester and decided to develop it further for my final thesis.

There are many small medieval villages in the Gavarras ridges. Their cemeteries were located in the outskirts. Over time, population and infrastructure growth these sacred places have become isolated. They are now detached from the community and share space with industrial parks surrounded by highways.

Death is an inevitable experience in everyone’s lifetime. The current locations no longer represent the importance of this event, the essence of the rite itself has been lost. The thought of attending such an event there, made me believe that changes were necessary. It seemed appropriate to consider the dolmens and their mounts, as they are ancient tombs from neolithic times. They are ruins found in the forest, however, centuries later they still maintain their mystical and sacred essence. The project proposal “Sacred” intends to revisit the liturgy and proposes a new space that understands the surroundings of the region and the solemnity of the burial ritual.

30% of the prehistoric vestiges of the area are concentrated in 4 mounts in the Gavarras. The journey starts at the Central Mount, where we find the Funeral Parlor and Promation (similar to cremation) Center. No one wants to be there, so its best that it disappears. It’s polished stainless steel structure camouflages into the scene. After the wake, families embark in a journey through the forest, where they can reflect on death, while carrying the ashes to one of the 3 other “Sacred Mounts”.

Throughout the project all the interventions carried out in the paths and structures intend to be unobtrusive.