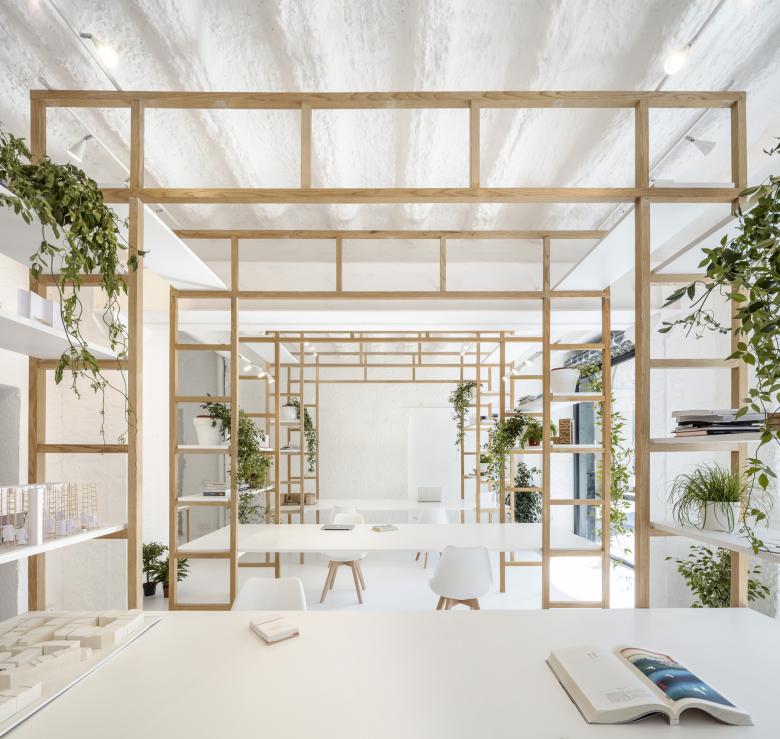 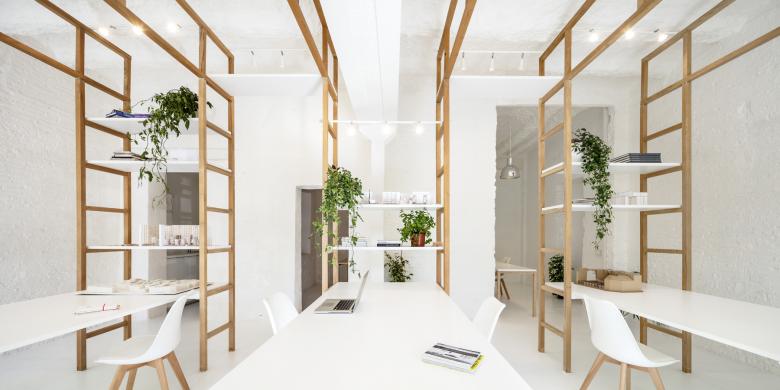 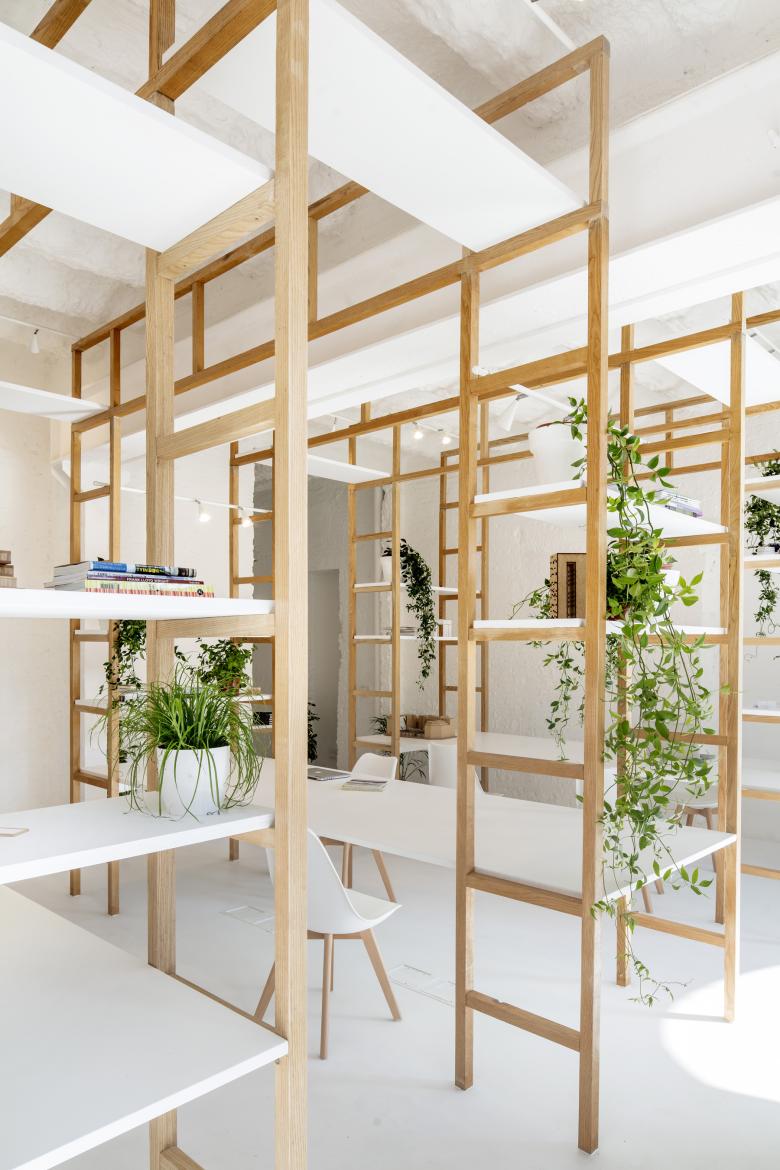 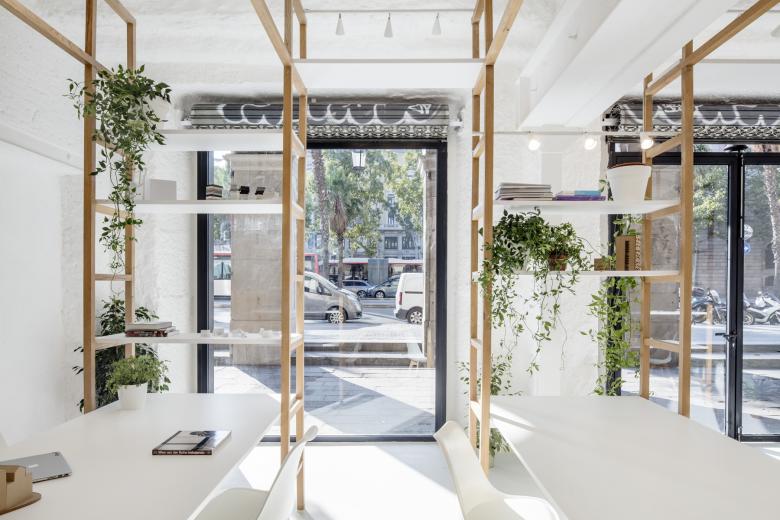 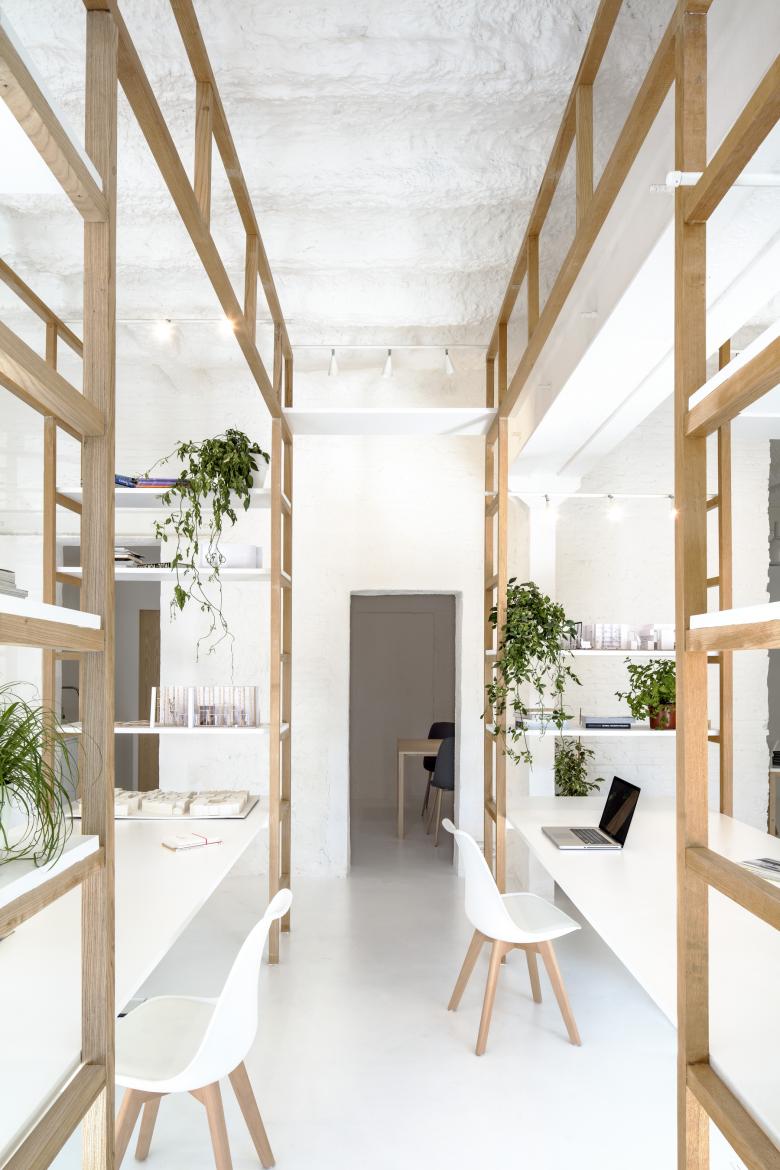 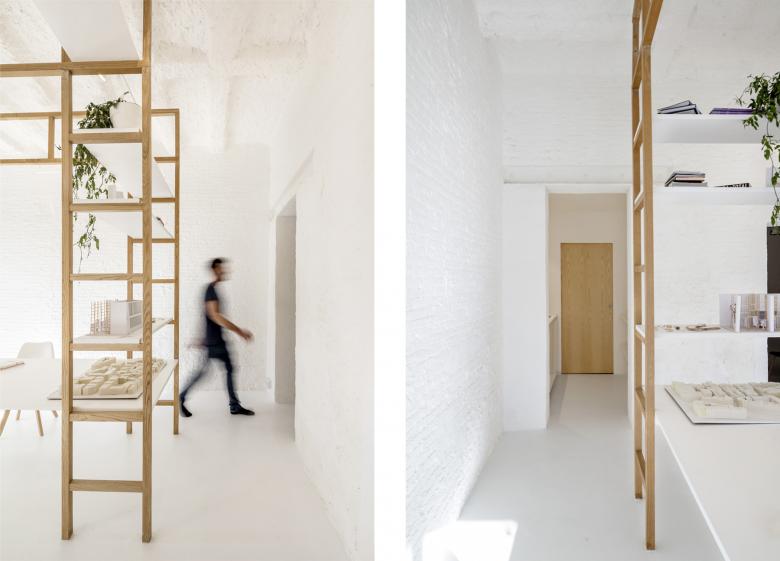 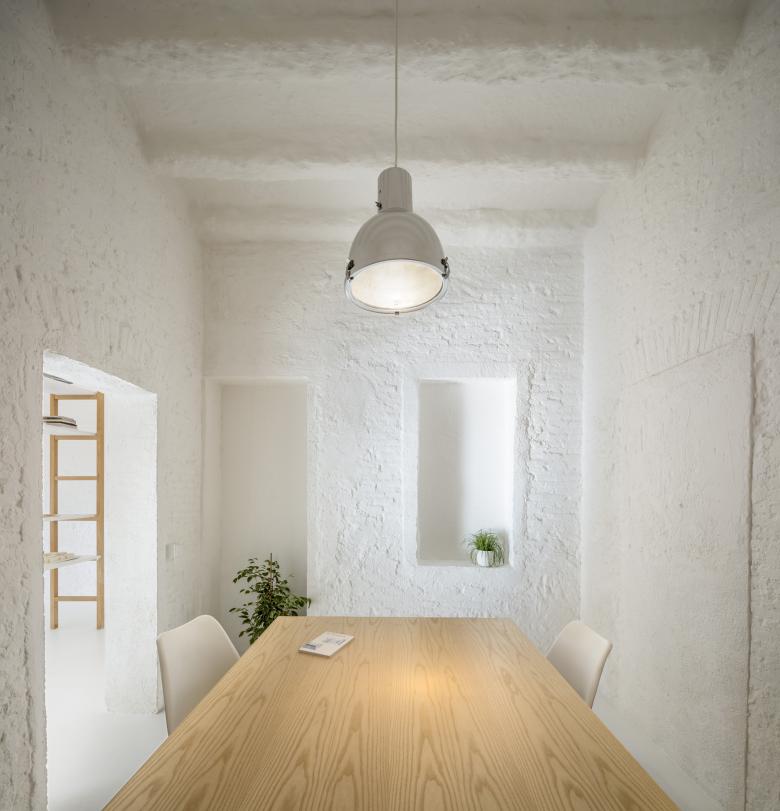 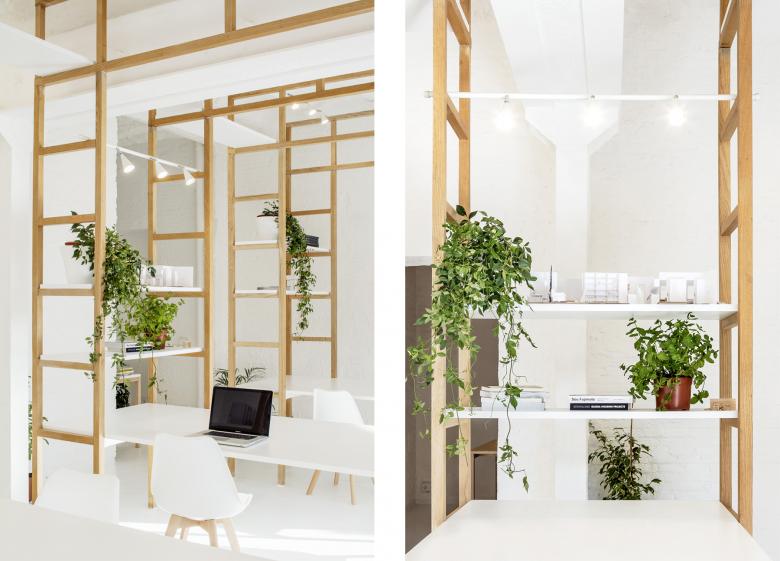 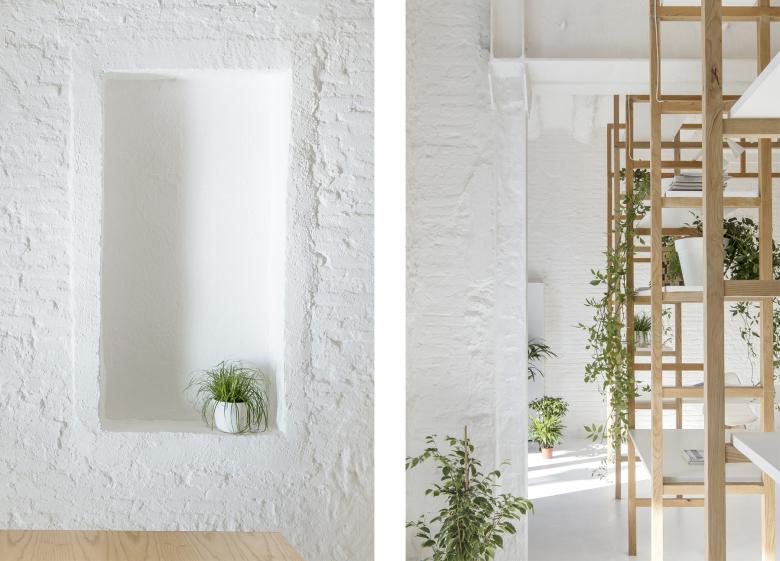 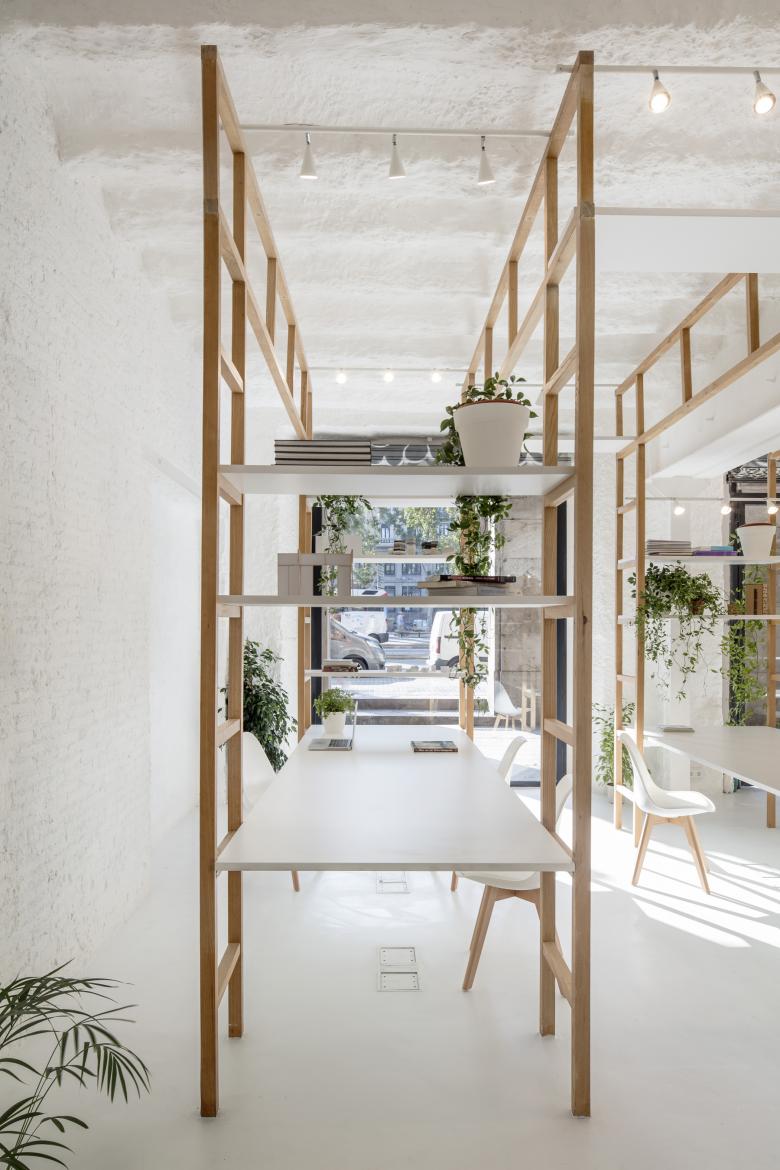 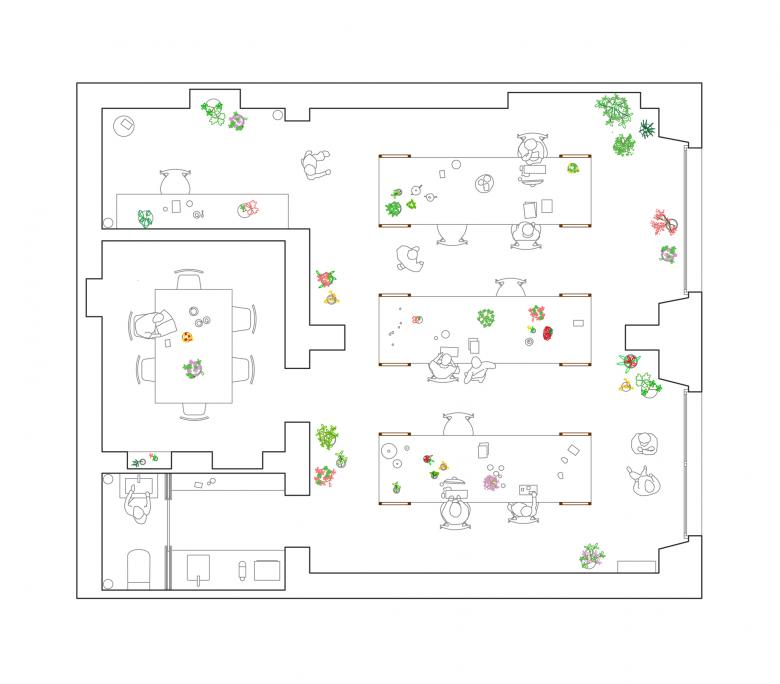 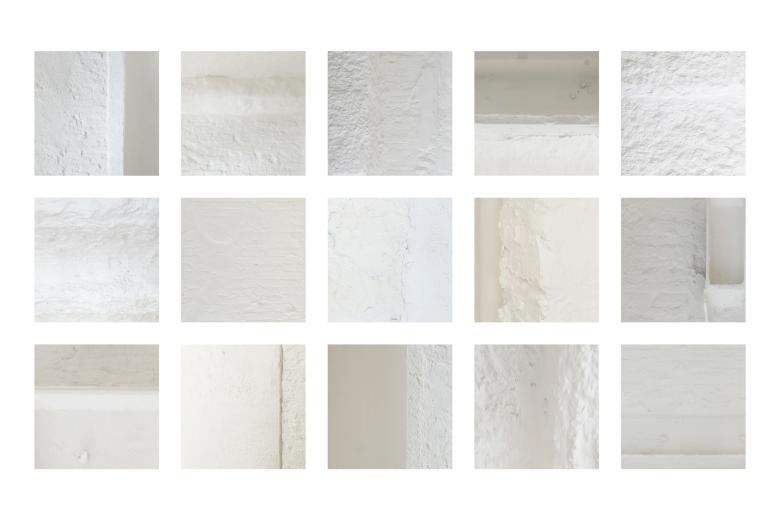 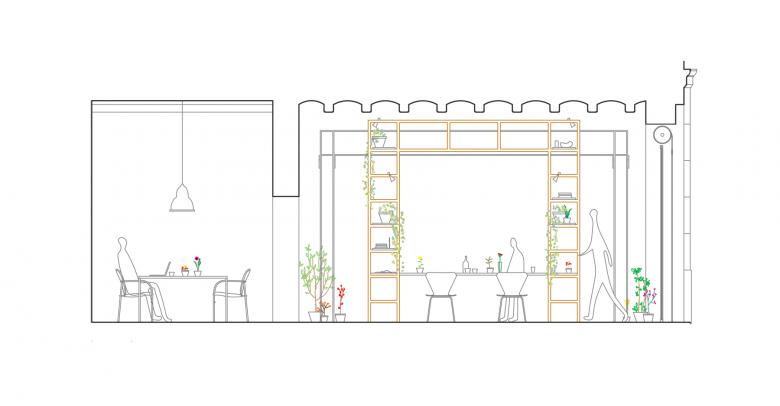 This project presents the opportunity to convert a mid-nineteenth century space into a multidisciplinary design office located in the El Born district arcades. The principal concept was to create an atmosphere where the old constructed forms highlight the new geometry that meld with the nature and the human.

The first intention was recuperating the heritage value of the existing architecture through several interventions that aim to reveal its material potential. The plaster-work was peeled back to make visible the stone and old bricks walls, and the false ceiling was removed to show the fireproofing protected wooden beams. Interior windows and openings that were no longer needed were filled in, and new openings were set up by structural reinforcements in the load walls. Finally, the existing walls, the high ceiling and the new continuous pavement were all painted white; unifying the material textures formed by stone, ceramic, mortar, plastic, iron and steel in a unique environment that seems to be snowed. The result is an abstract and bright scenery where the absence of matter, light and time fuse.

The office program is defined by the structure of the building, which establish an intermediate space in-between the street and three rooms. Each room has a different function and the dimension of its aperture determines the natural light incidence and its level of privacy. The first room is a separated place with a 2.70 meters long table that highly receives natural light due to its great entrance frame. The second is an almost completely closed meeting room with a reduced height opening that encourages people’s communication in a private atmosphere. The third room concentrates the wet areas such as the small kitchen and the toilet. The structural wall, together with its game of entrance frames, gives a perception to have an interior facade seen from the semi-exterior space.

The second design strategy invents a new sculpture-like system inspired by Torii; a traditional Japanese culture symbol which represents a gateway that signals the transition from the profane to the sacred, usually located at the entrance to Shinto shrines. The reinterpretation of this element is repeated to build a form that exists between the abstract and the concrete, to create an ambiguous self-supporting structure that blur the boundaries between interior and exterior. The ordered geometry generates both an interior working area and two exterior corridors that provide a greater sensation of privacy from the street. The transparency between these spaces varies depending on the viewer’s standpoint, giving rise to different visual experiences while walking through the office. This translucent Torii path enhances the visual depth of the space and leads to a natural and harmonious environment that stimulates people to interact.

The elements fixed between the timber porticos stabilize the horizontal loads of the system while meeting the office functional requirements. Three 3.40 meters long tables organize the main working area while following the rhythm of Torii. The shelves, which seems to be settled apparently random in different heights, create an aesthetic dynamic composition while giving support to books, models and plant pots. At higher levels, the steel bars hold the spotlights. The flexibility of the system allows the users to modify the placement of tables and shelves, providing new design possibilities that respond to future needs without altering the initial concept of the project.