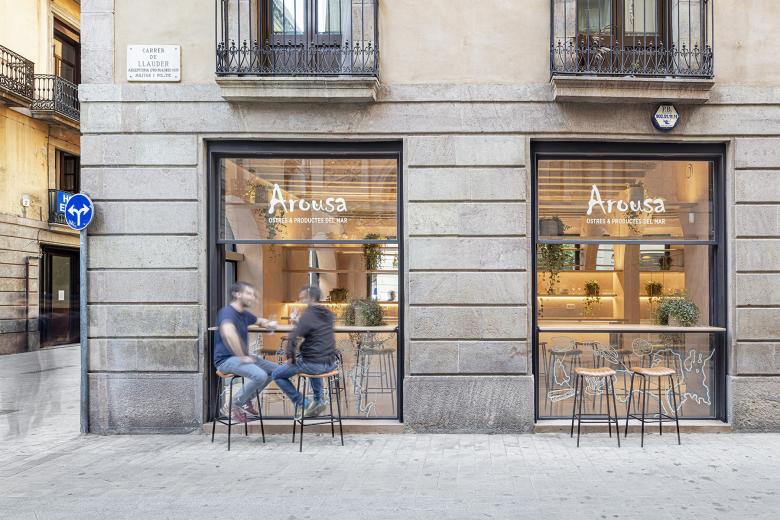 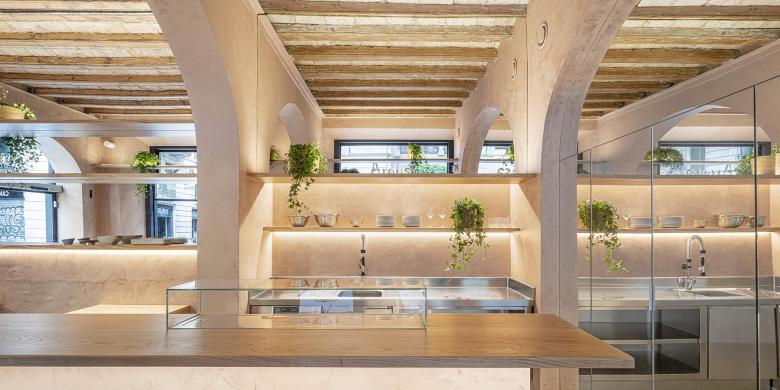 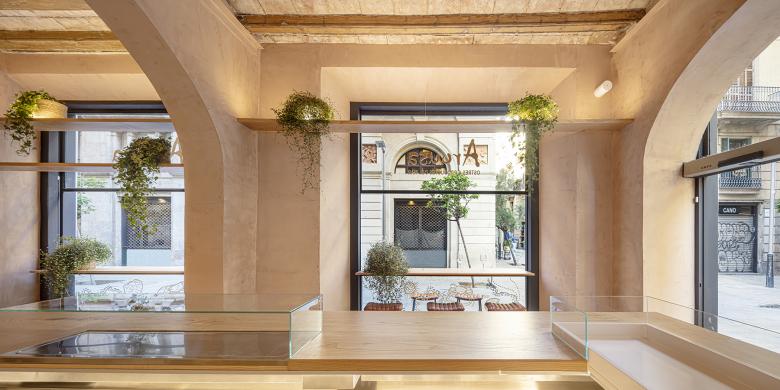 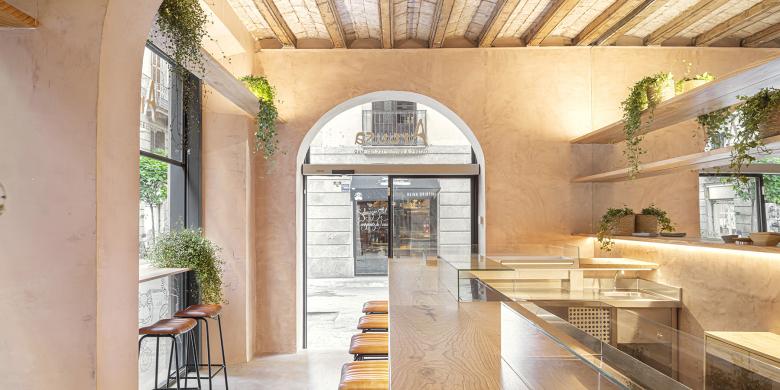 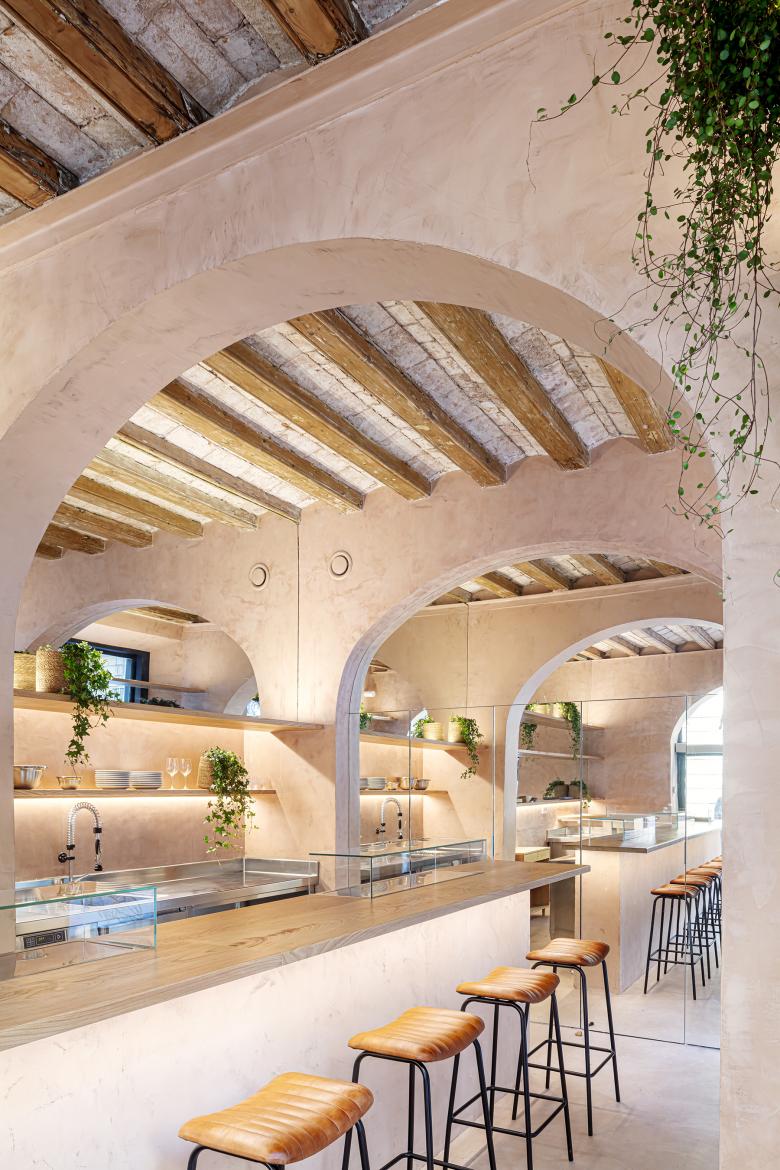 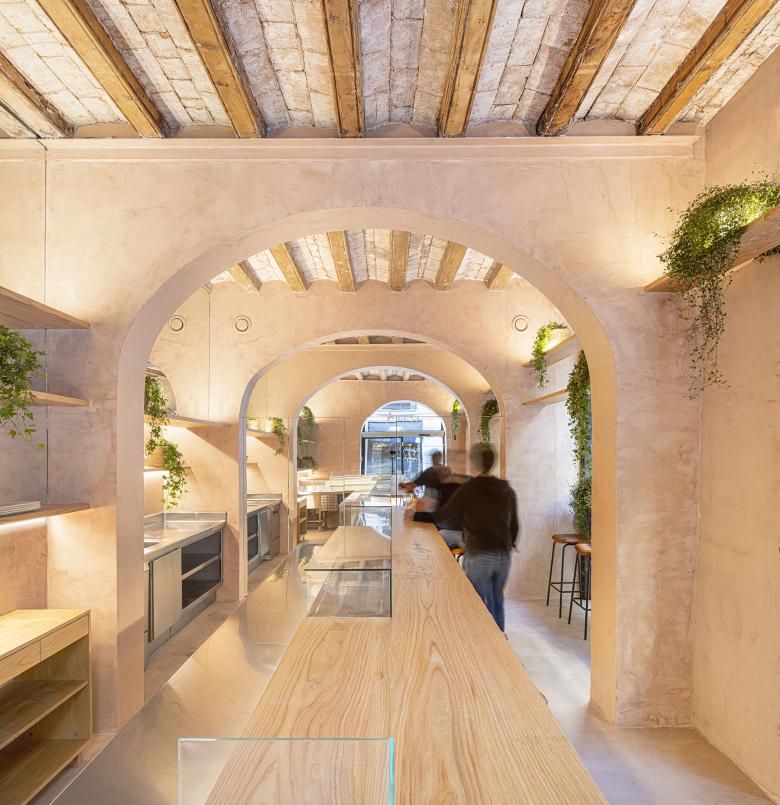 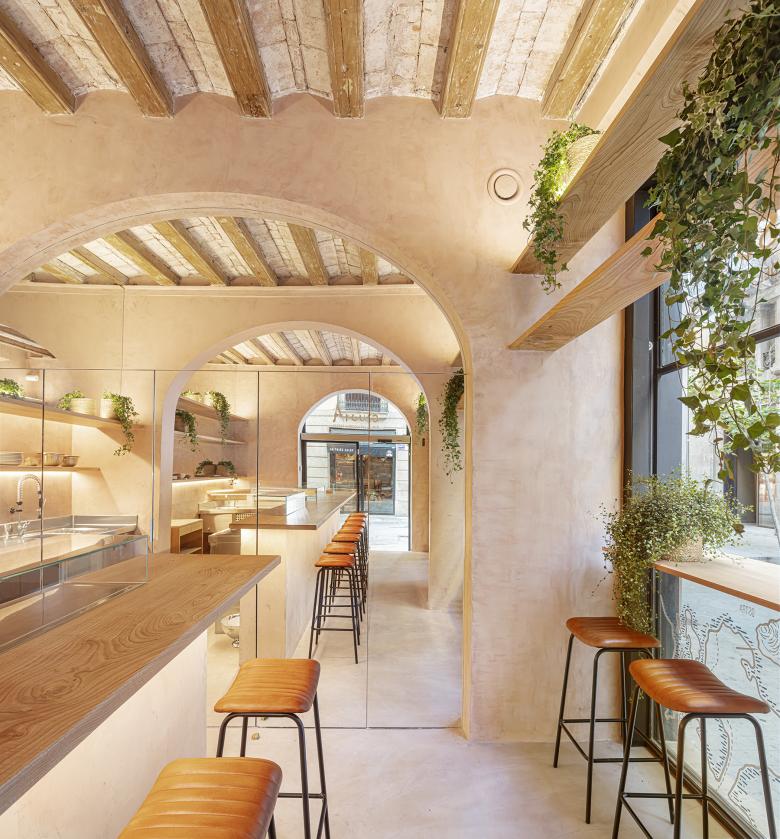 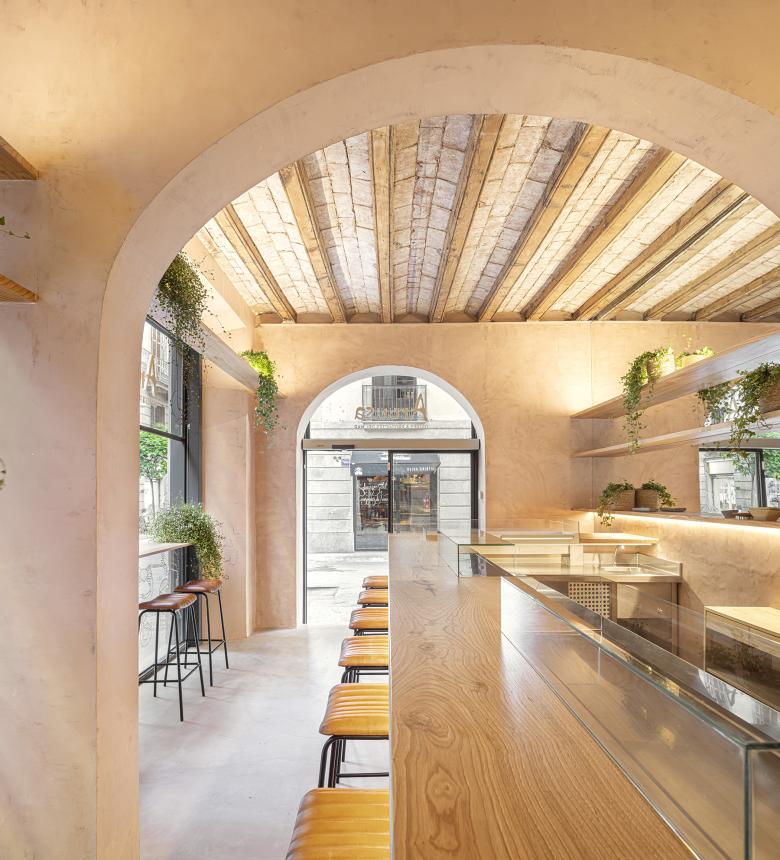 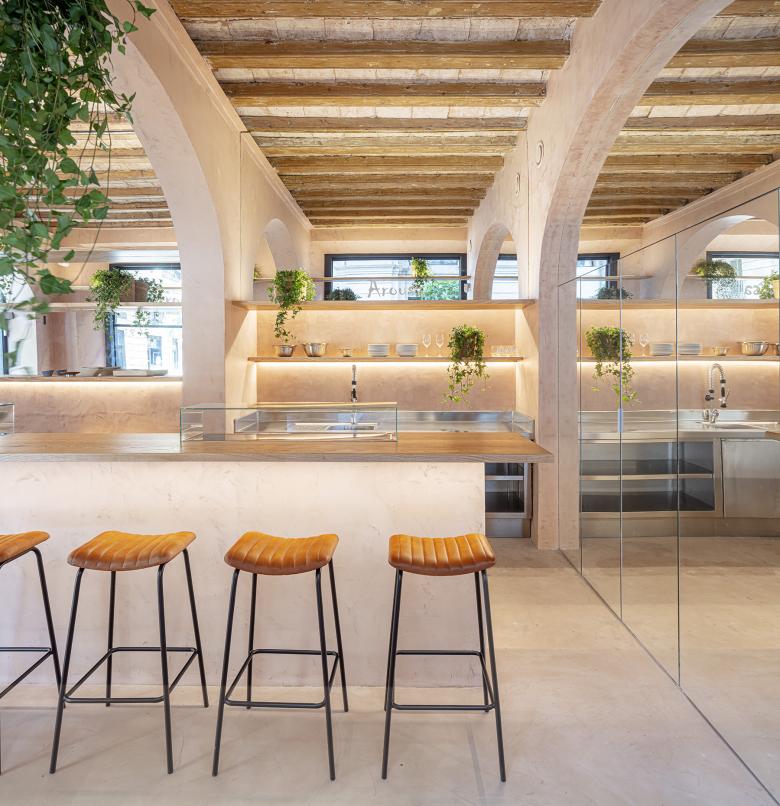 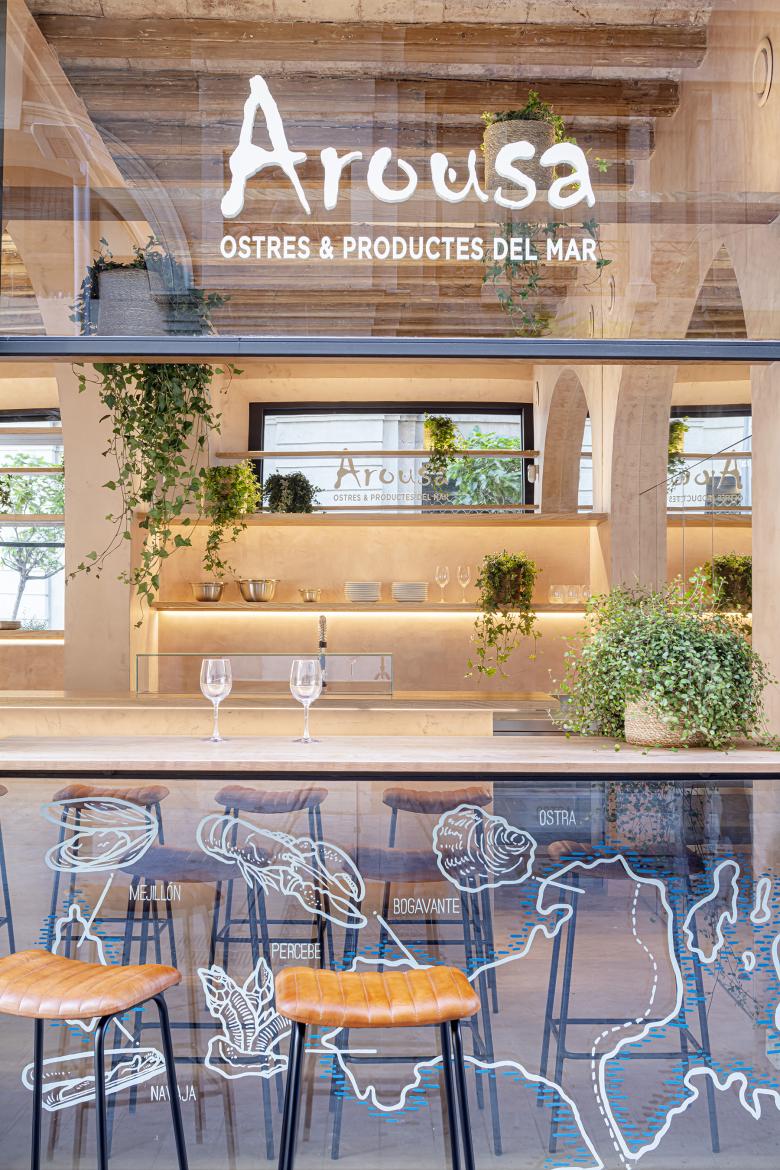 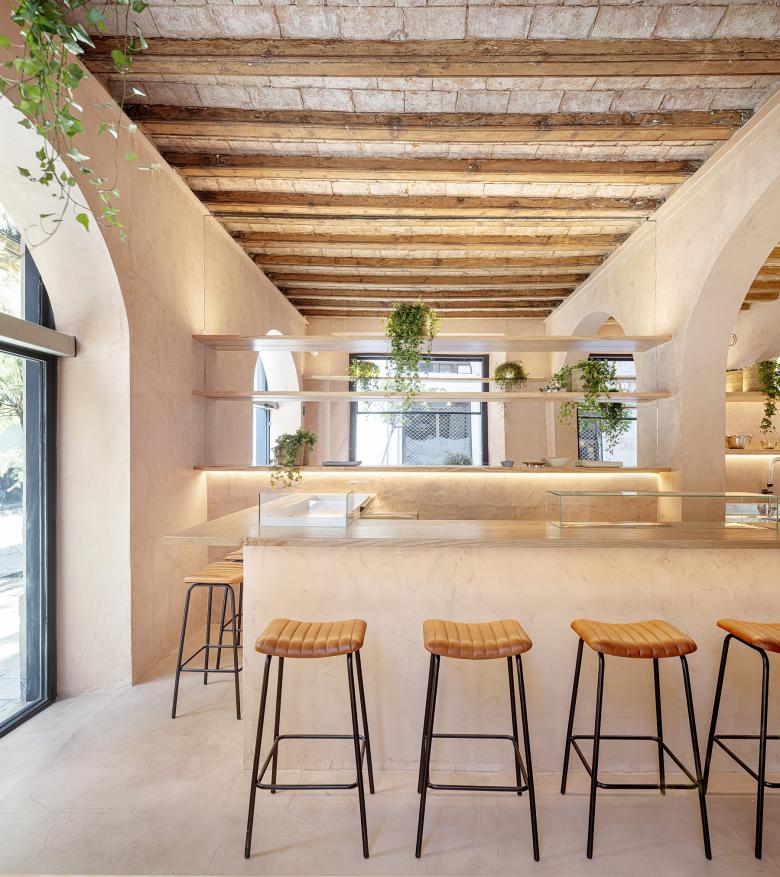 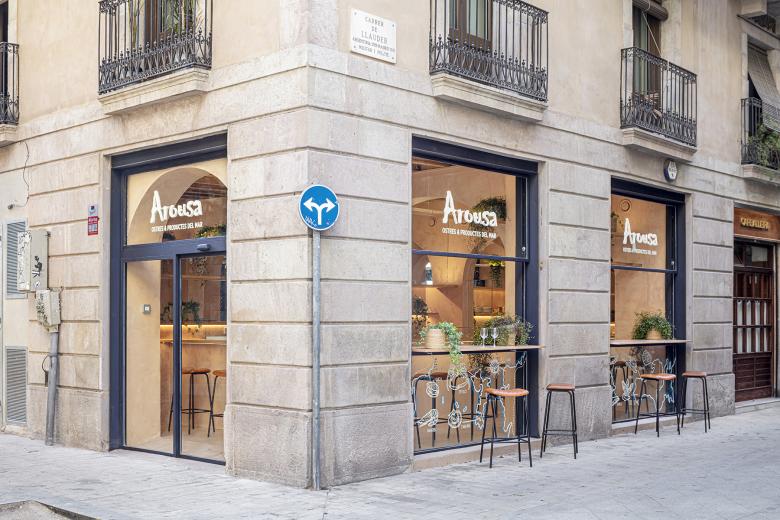 This project involves the conversion of a 30sqm space into an oyster bar, located on a corner a few meters from Barcelona’s Port Vell. The design increases the spatial depth four times and enhances the existing architecture, giving rise to a new atmosphere where the old and new merge together.

The repetition of two elements of the building structure highlights the beauty of the original construction; vertically, the formal elegance of the arches and horizontally, the materiality of the wooden beams with Catalan vaults.

The first design strategy consists of granting a visual amplitude to the oyster bar, through large mirrors placed on the perimeter walls. Space expands generating the perception that it is four times larger than reality. A direct relationship with the street is created when sitting at the bar, giving the feeling that all the limits of the premises are windows.

This visual effect transforms the three real arches into a succession of five porticoes with two arches each. An arched mirror hides the servant spaces of the bathroom and storage room, creating a new longitudinal rhythm throughout the oyster bar. The challenge is to create an interior porch completely open to the outside, through two large iron windows that provide activity from the street thanks to their exterior bars. The entrance takes place from the threshold that forms a new arcade built on the façade, framing both the beginning and the end of the user’s sensory experience.

The second design strategy responds to all the necessary functions, through a system of chestnut boards that blend with the architecture of the building. The project extrapolates the formal, material and structural language of the wooden beams, which support the Catalan vaults. In this way, the new elements harmonize with the old through a simple and unitary concept.

The eleven horizontal planes have different uses depending on the height at which they are placed; at 110cm they serve as bars, while at higher heights they support bottles, kitchen utensils, display products and hanging plant pots. The lighting of the project emphasizes the unidirectionality of the boards suspended between arcades, through LED strips hidden in the upper and lower parts of the horizontal wooden planes.

The oyster bar merges with the existing architecture and structure, formed by arches and beams, however, the main objective is to provoke a sensory user experience. The presence of hanging plants, placed in an apparently random position, generates a poetic space in movement. A new atmosphere full of living nature and wood provides a comfortable place to taste oysters. The imperfection and sandy hue of the microcement walls acquires different nuances through the light, giving rise to a changing scenery that stimulates sensations in the user.