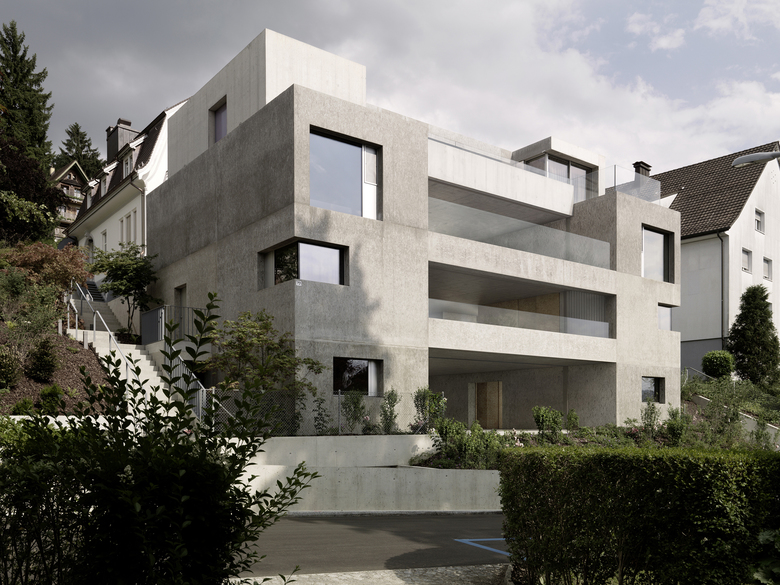 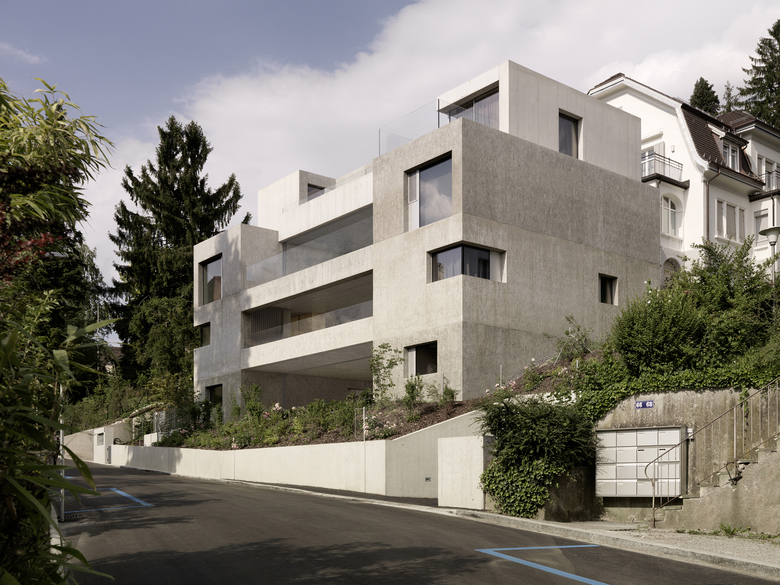 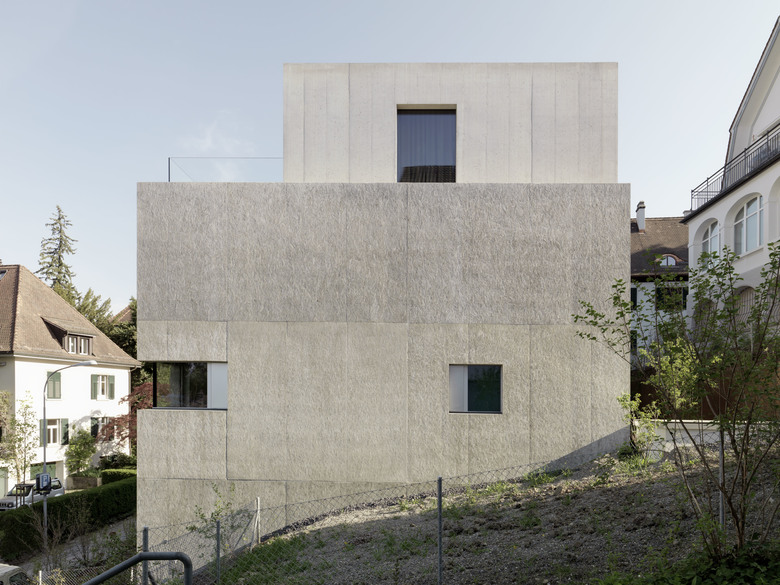 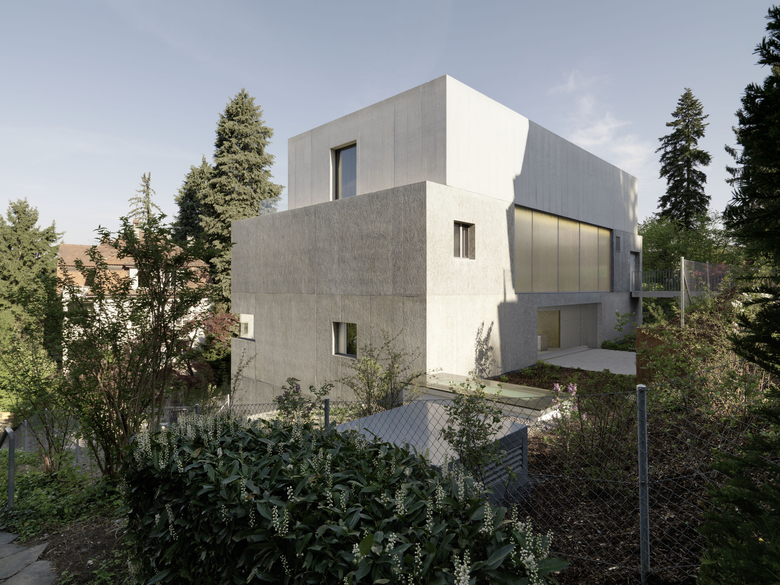 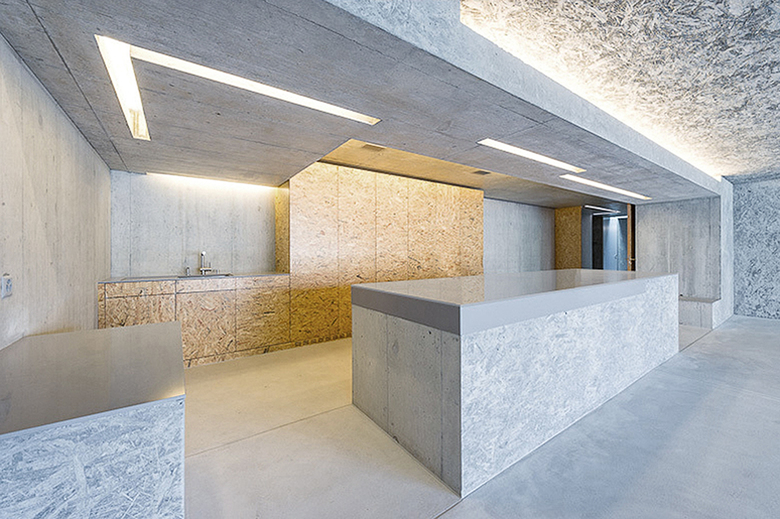 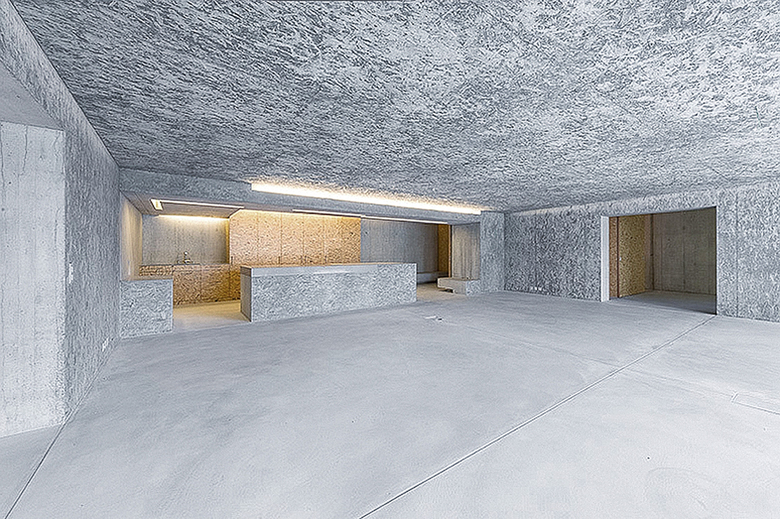 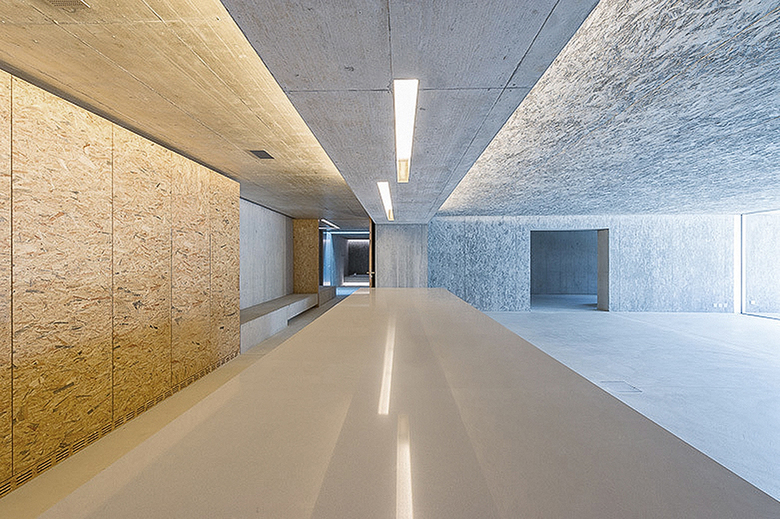 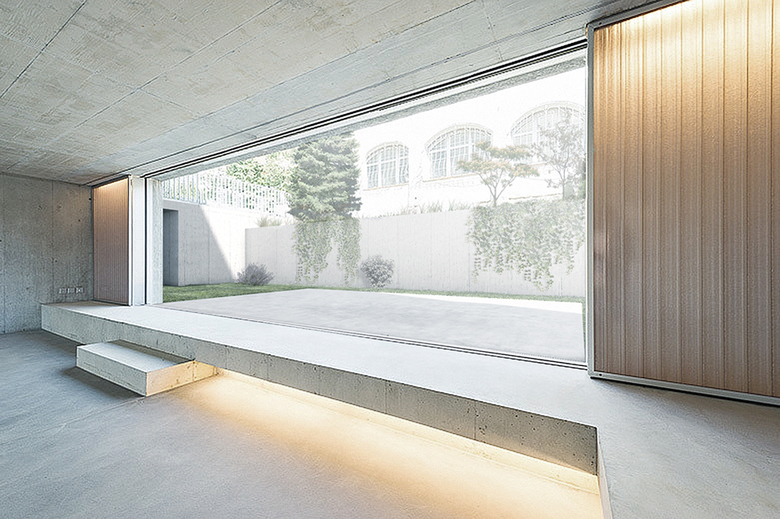 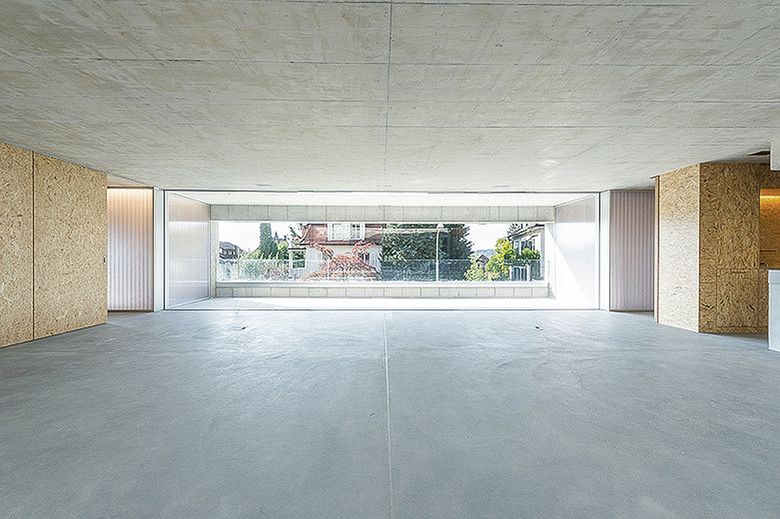 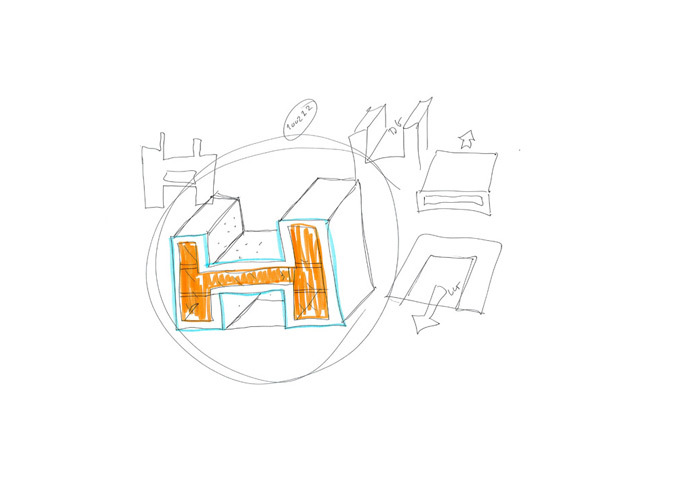 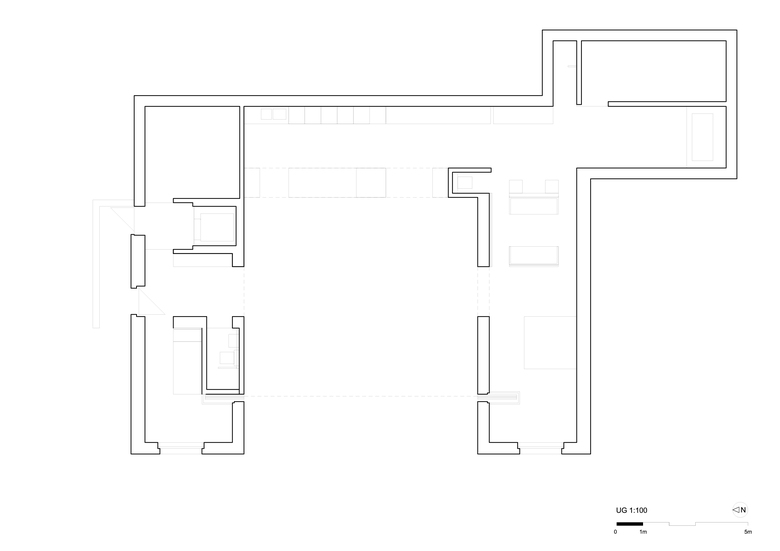 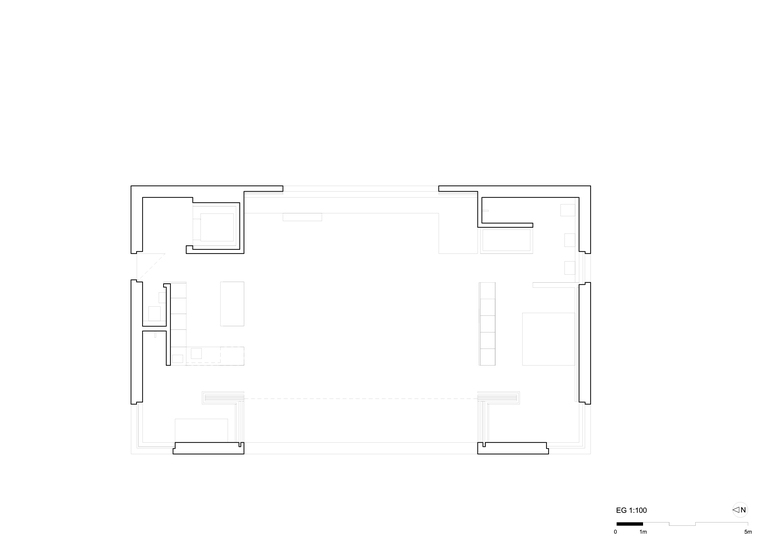 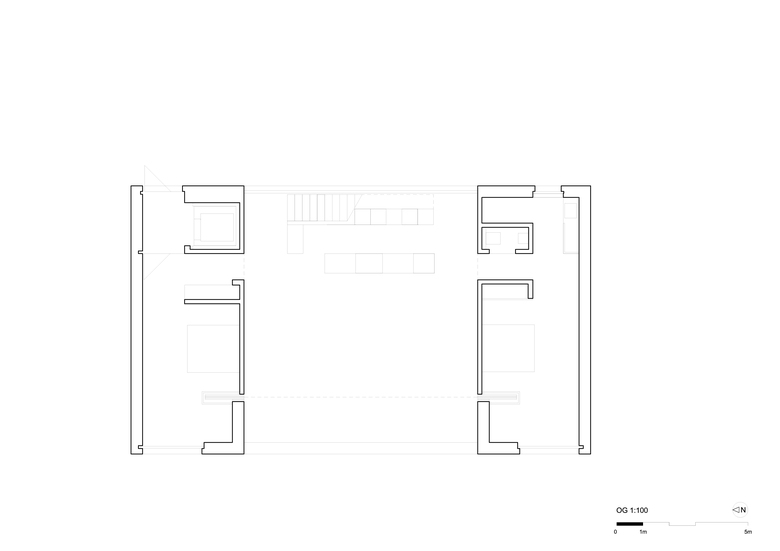 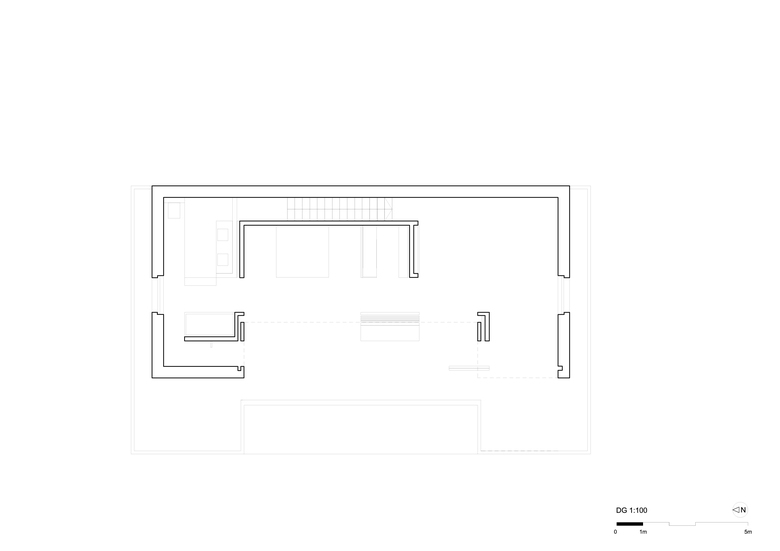 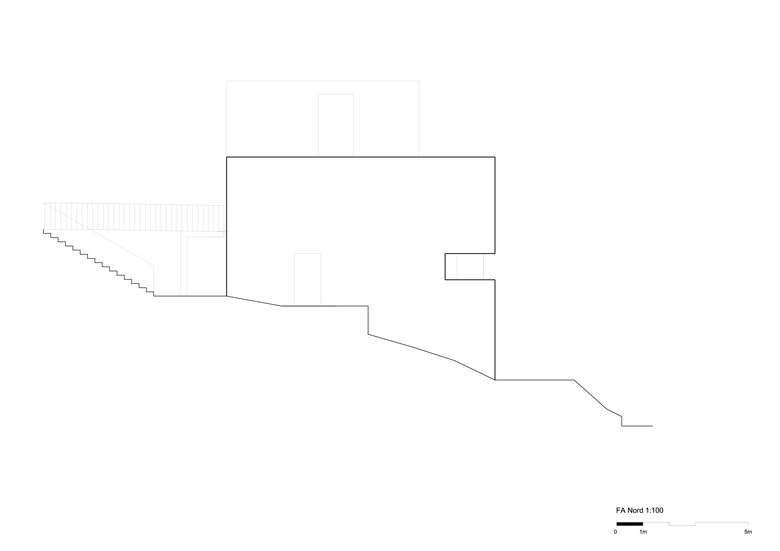 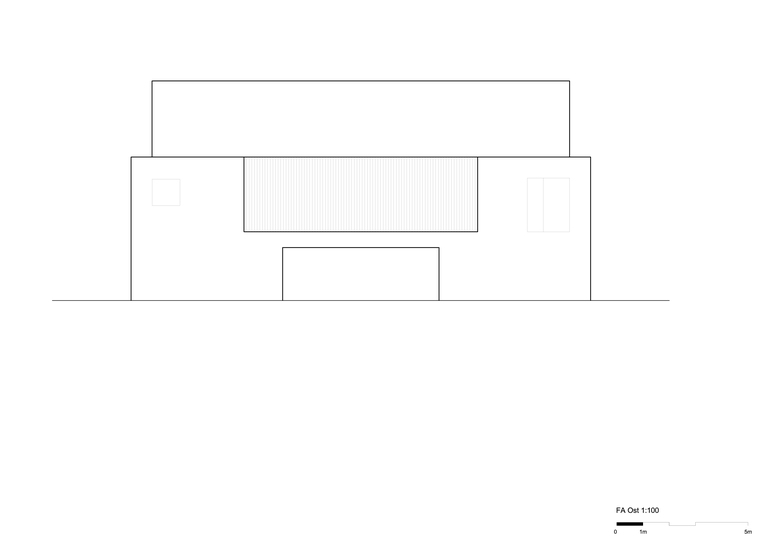 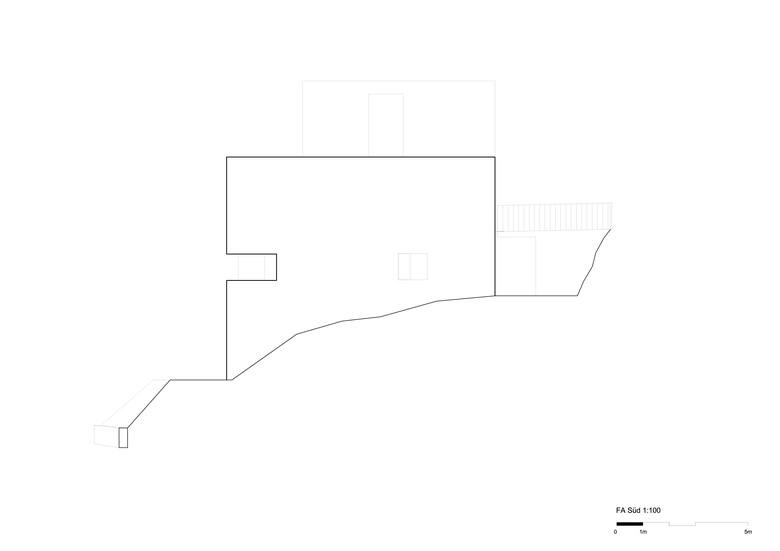 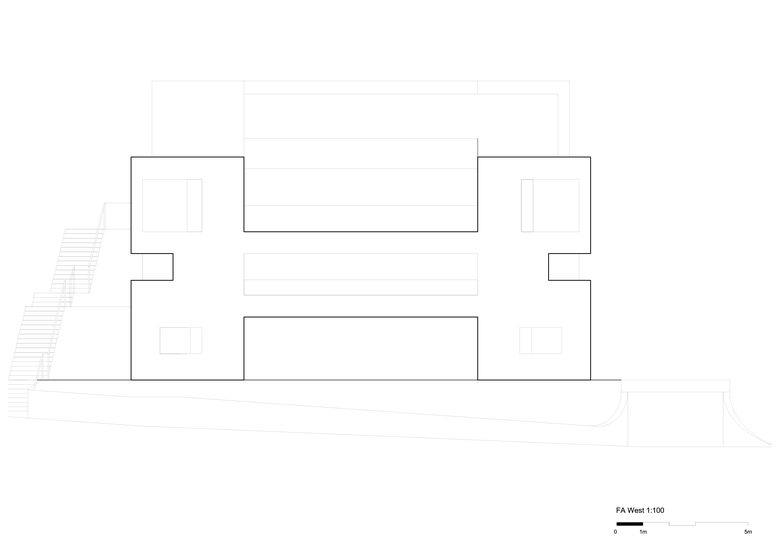 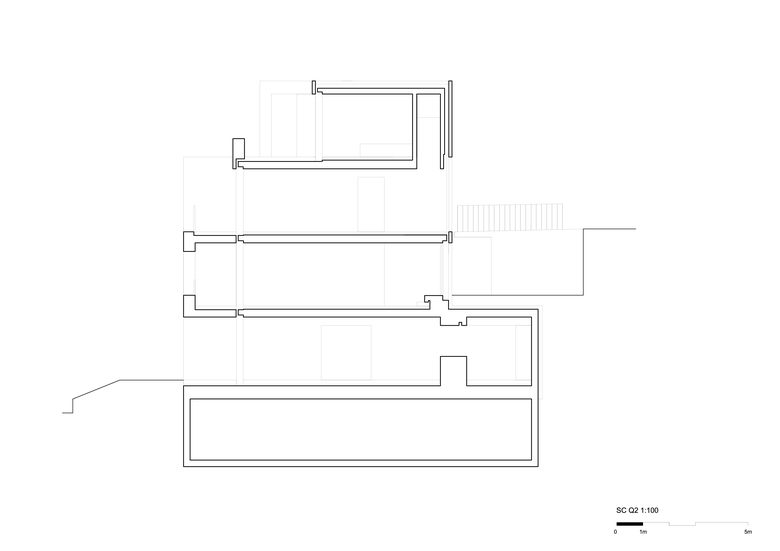 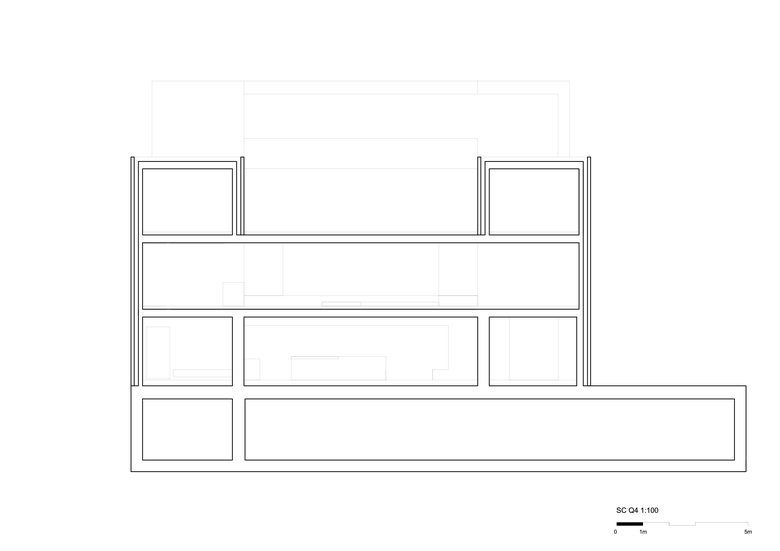 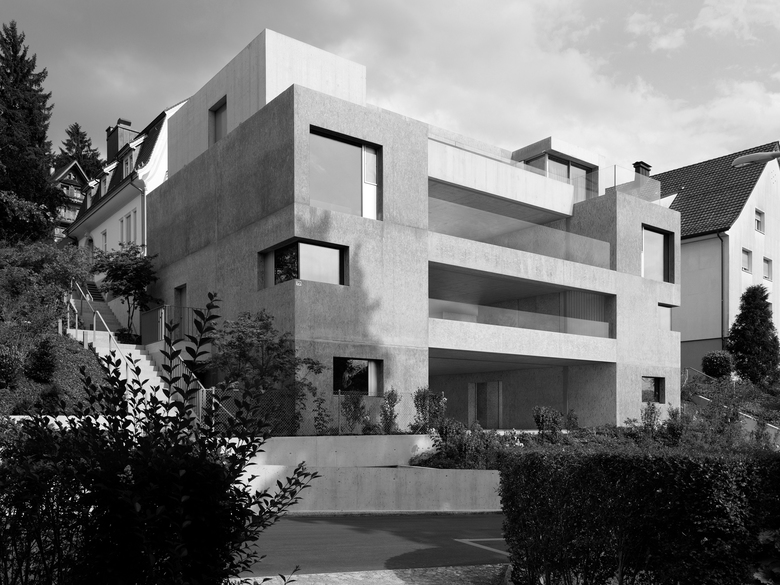 Program and context – The site is located in the district 6 in the city of Zurich, originally a residential neighborhood with large gardens. The project was an apartment building with three rental apartments, one apartment on the ground floor with a garden, an apartment in the middle, due to the slope with a garden too and on the top floor a duplex penthouse. The wanted the living rooms to be outside rooms with maximum views and optimal exposure to receive the light. This while keeping the upmost privacy in the dense Context of the city. Therefore the goal was to achieve spaces you normally only get in private houses, but not in an apartment building.
Another topic we follow here, is to leave the context of the house in the architectural connotation. Not the facade, as separation between inside and outside, so the tempered space, generates volumetric face of the building, but a figure independent from the heated space, generates presence and power.

Architectural concept – In this project the architectural concept eventually led to the figure of a Stone H. The letter H has under the bridge a covered outdoor space and over the bridge a patio. We put yet another stone, the attic, which makes this Patio turn into an outer space above the H. Thus, the living spaces are considered as outdoor rooms, because they are outside the mass of the H. The H is a well-known letter on which we put a stone on top of it. This produces less a volume of a house than rather two stone elements, two masses almost without glass. In cold weather, the outdoor spaces which are the living rooms can be closed with large sliding windows, so that they become inside spaces. This figure is inhabited below and above it, a shaped mass which develops an original force and almost a ruin equal, evades the dictates of civilized 'conformist concept of home, from exterior and interior. It is the desire for freedom and renewal, that let us bring well-proven elements of architecture in new contexts. It creates powerful habitats, without additional cost.

Mass and light, program free and Periphery – The stone H has a two-shell concrete structure. The outer shell of the H is casted with OSB, which generates a rough, almost organ surface. On the inside of the H the surface is smooth concrete.
The different casted surfaces enhance the feeling that the living room is actually an outer space. In concrete recessed light fixtures provide indirect lights, enhancing the impression of mass communication in space, components become alive with light.
In our understanding of program free architecture, all programs are hidden in the periphery and can be deployed into the room as needed. The Leitmotiv of the mass is articulated by the sculpture of the H and even the interior walls, as they appear 0.5 m thick. These massive stone elements generate a strong force and attraction.
On the contrary normal dividing walls are between 15-20 cm only suggest separation.
We formed these masses into a communicating topography, with programs like kitchen and concrete benches in the periphery to interact with the space.

Construction and cost effectiveness – Contrary to popular belief, a twin-shell concrete structure is economically not the most expensive system and therefore not luxury. We have calculated that it amounts to the same cost as a standard facade. This is because the shell once completed by the builder, is finished and no additional works are needed.