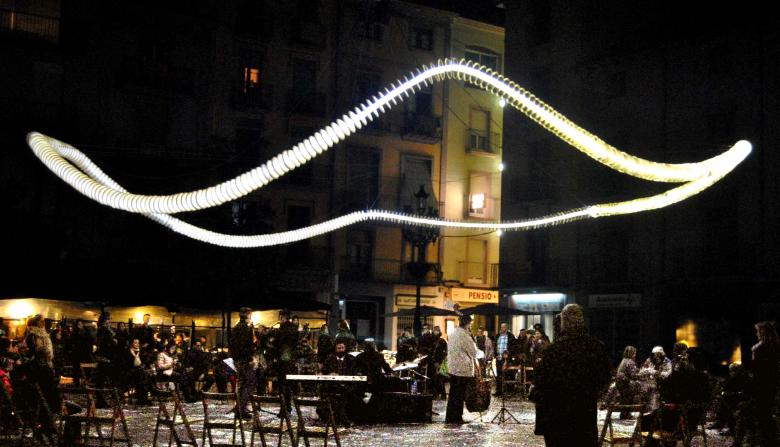 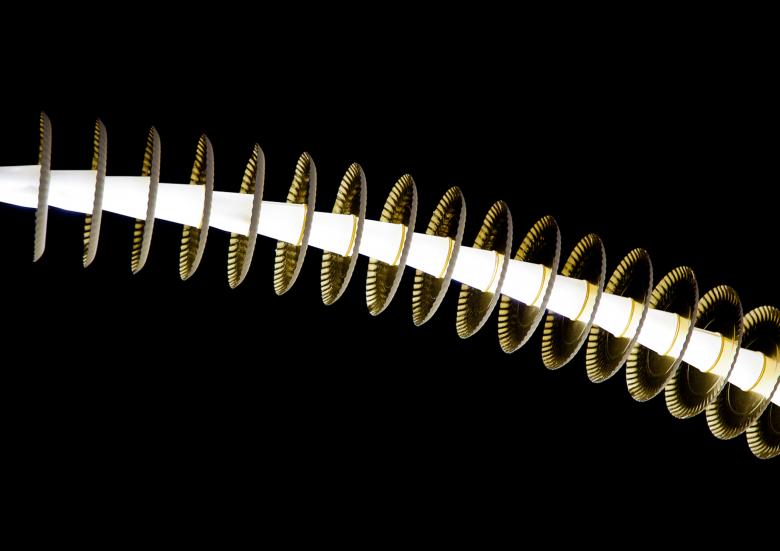 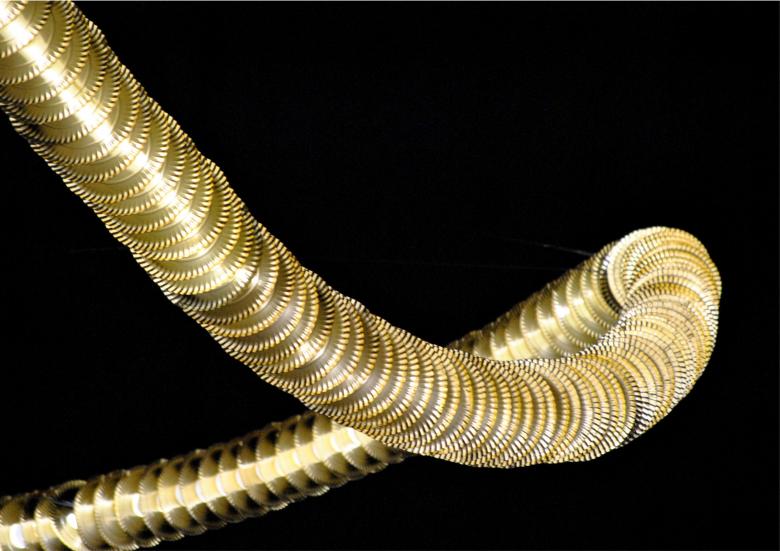 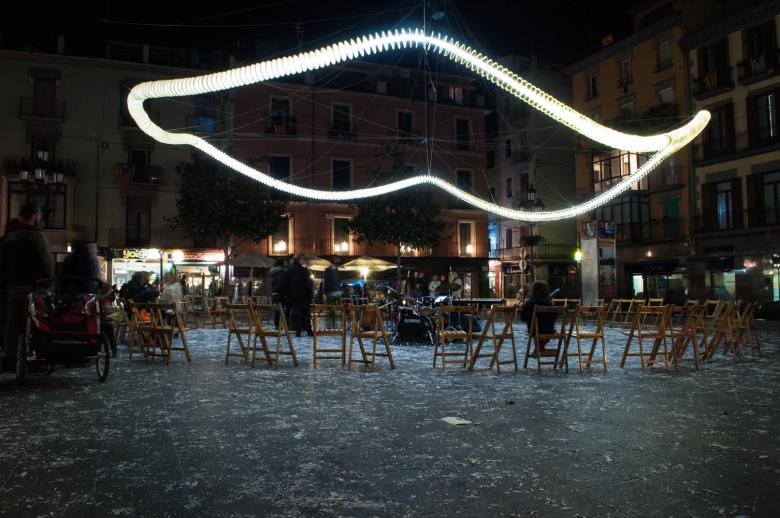 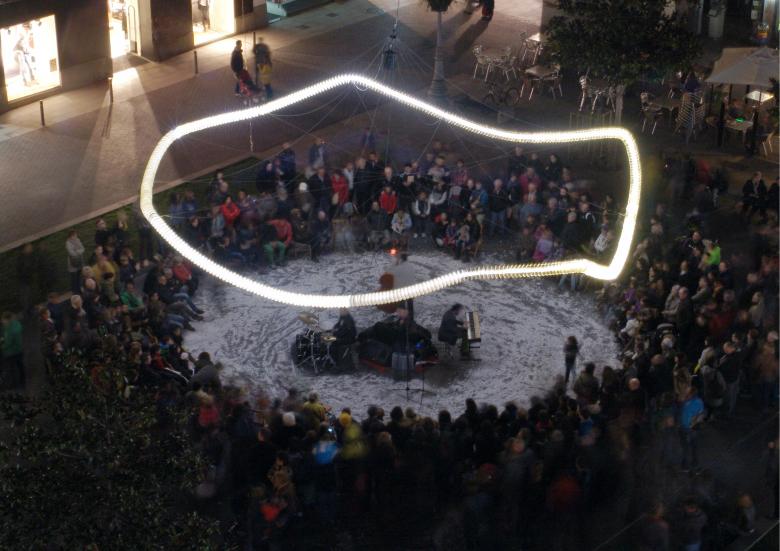 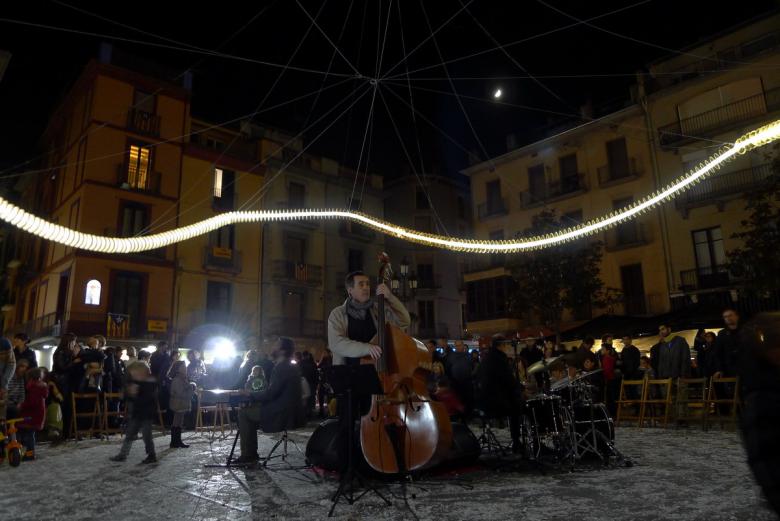 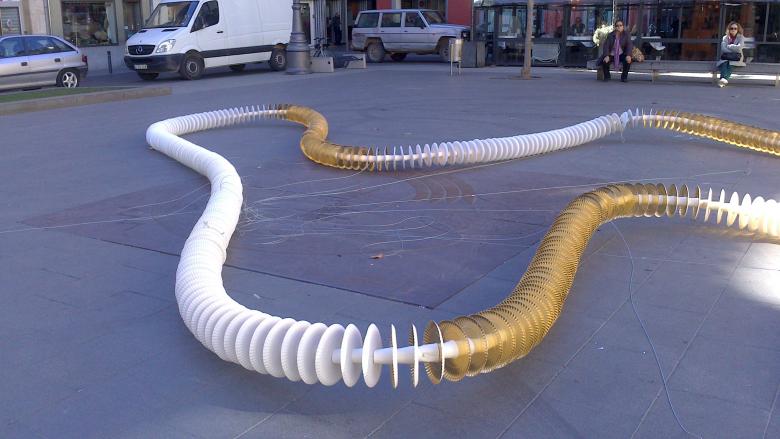 Settling in, joining in and topping a jazz concert in Olot's town square. Creating an atmosphere for a chilly night with the nuances and reflections of a golden cloud. Suspending an illuminated radiator 35 metres long a little above people's heads, built with alternating paper coffee cups and gilded paper cake trays. Circumscribing the middle of the square and the middle of the city, with the reverberation of the audience and reflective confetti as a carpet. Domesticating the public space with very few resources.

Taking advantage of the wiring in place in the main square to hang the installation entailed developing an artefact with a maximum load of 50 kg without sacrificing our goal of having a good length. The soul of the lamp is a multiple-layered plumbing pipe composed of two layers of plastic sandwiching a layer of aluminium. The overall piece is characterised by its plasticity, as well as being lightweight and durable. The piece was assembled in 5m sections, joined by specific moulded gaskets made by the same manufacturer. The joining pieces constrict, so the suspension cables can be attached to them without damaging the tube, as it will be reused later.

The lighting comes from continuous LED strips donated for the show and enabling us to execute our project. One strip was installed on each side of the tube to distribute the light uniformly. Each 5m section was connected with a cable to the transformers, placed inside a pail hanging from a higher level. The diffuser is formed by round paper cake trays with one golden and one white side, alternated with translucent paper cups. Making a cross-shaped cut in the bottom of the cups and trays let them sheathe the tube while the pressure of the flaps ensured that they would stay in place. The diffuser softens the brightness of the LEDs and adds warmth via its colour tone. The different qualities of the two sides of the tray imbue the cloud with a feeling of vibration that, added to its sinuous lines, offers a changing appearance depending on the point of view.

This installation was created in the framework of the second edition of Lluèrnia, Fire and Light Festival, which is celebrated in Olot on a Saint Martin's summer night.