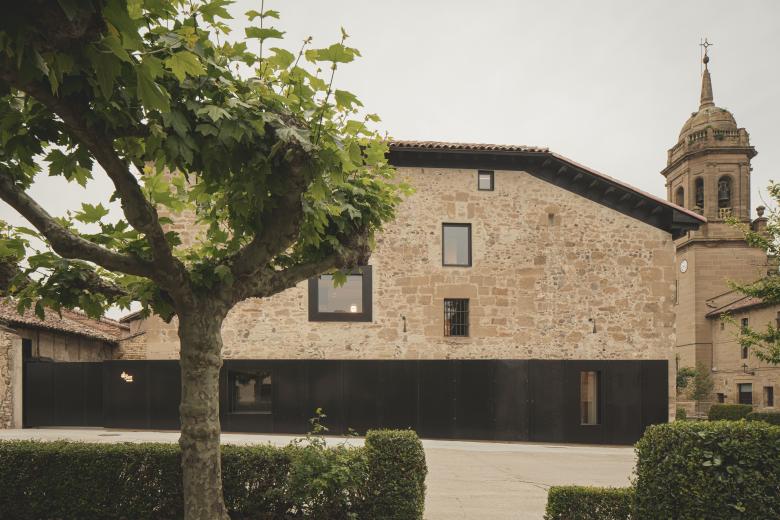 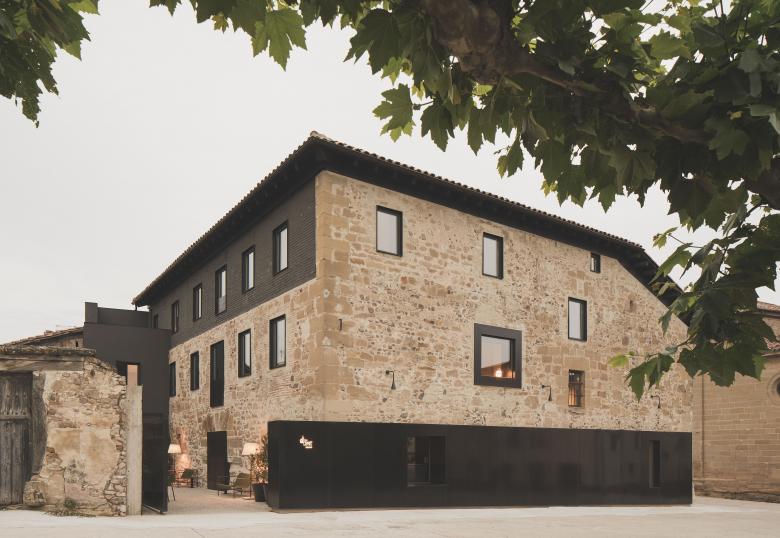 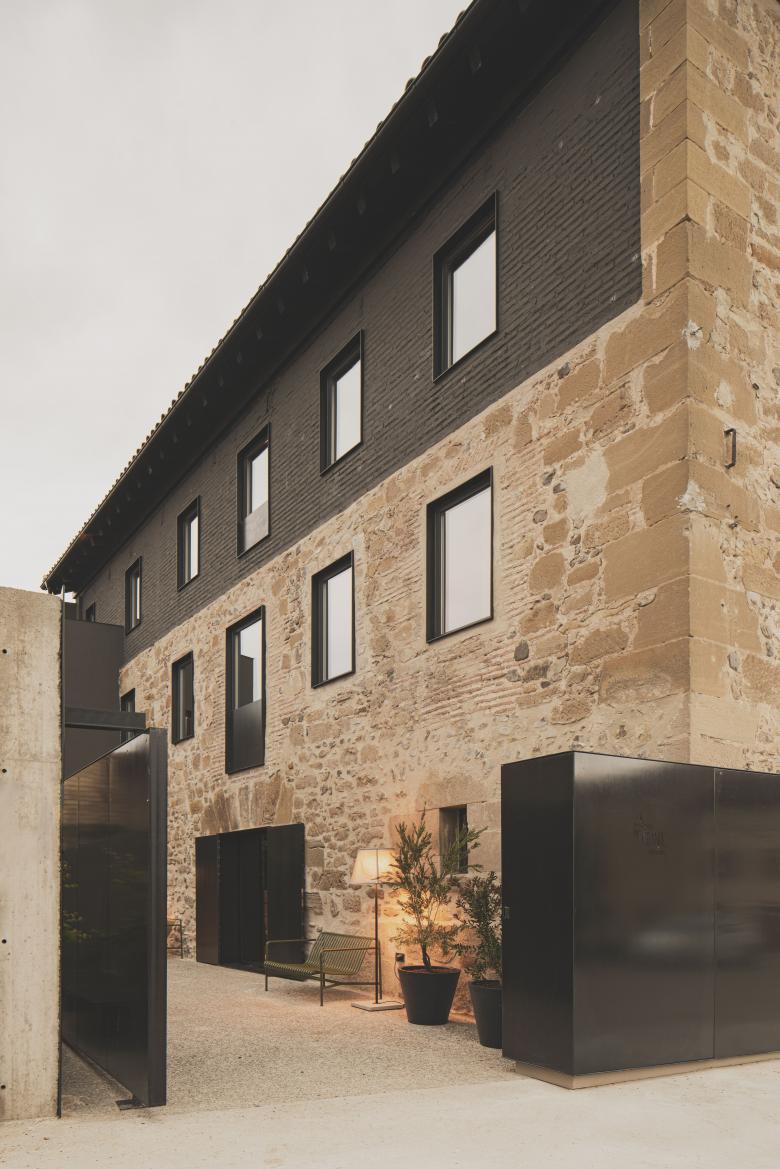 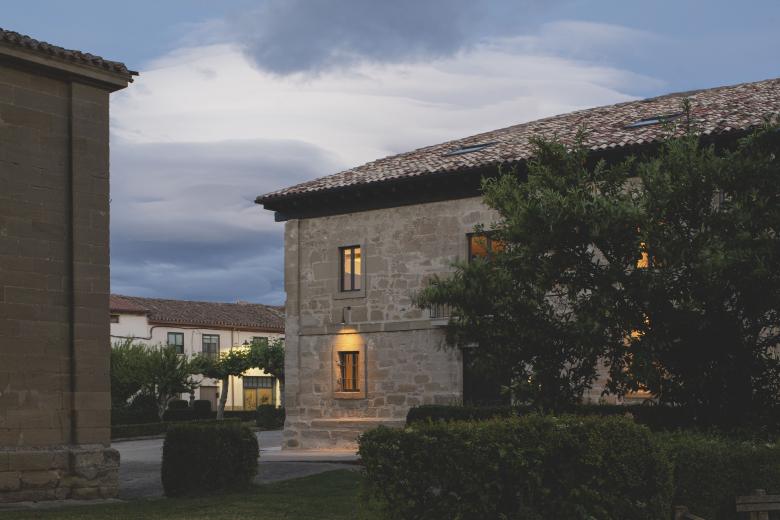 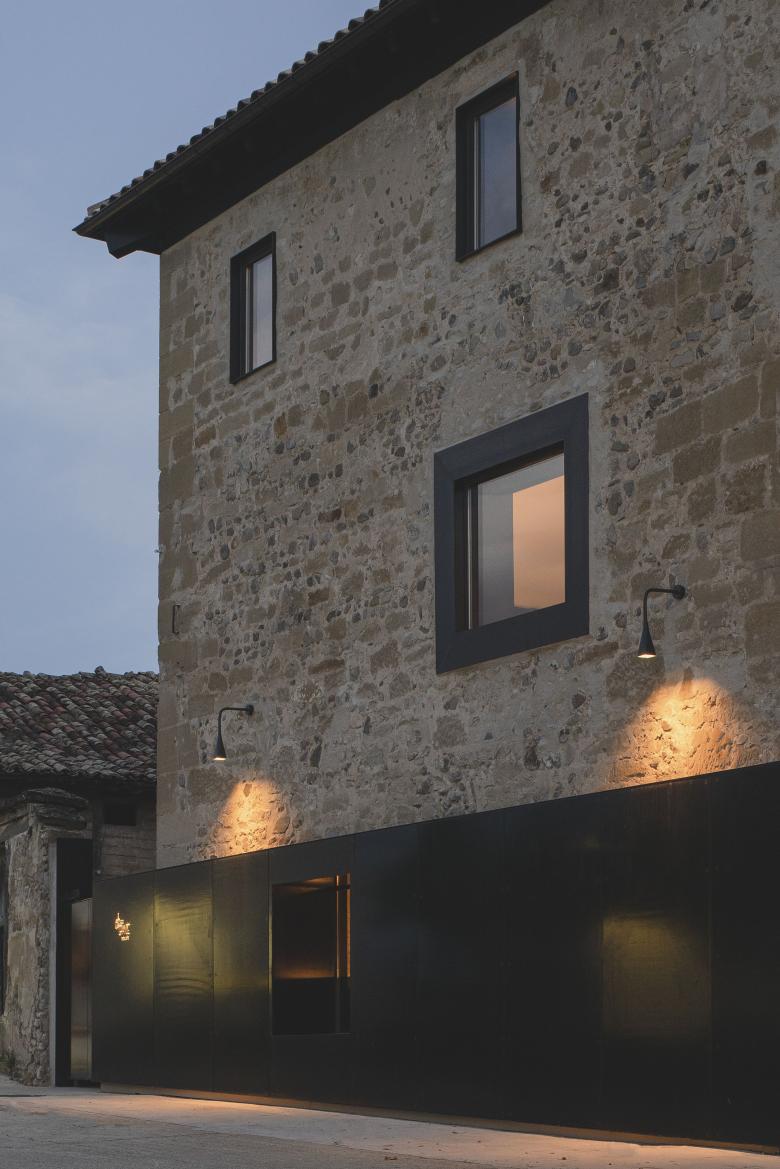 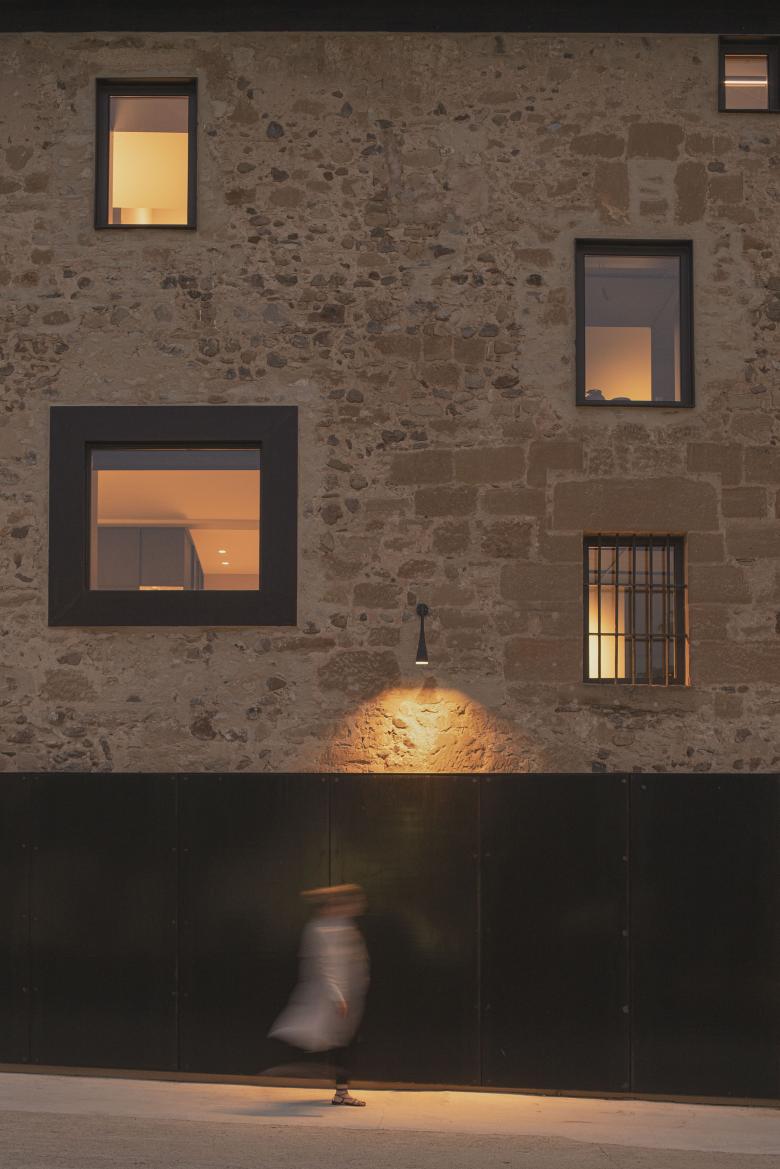 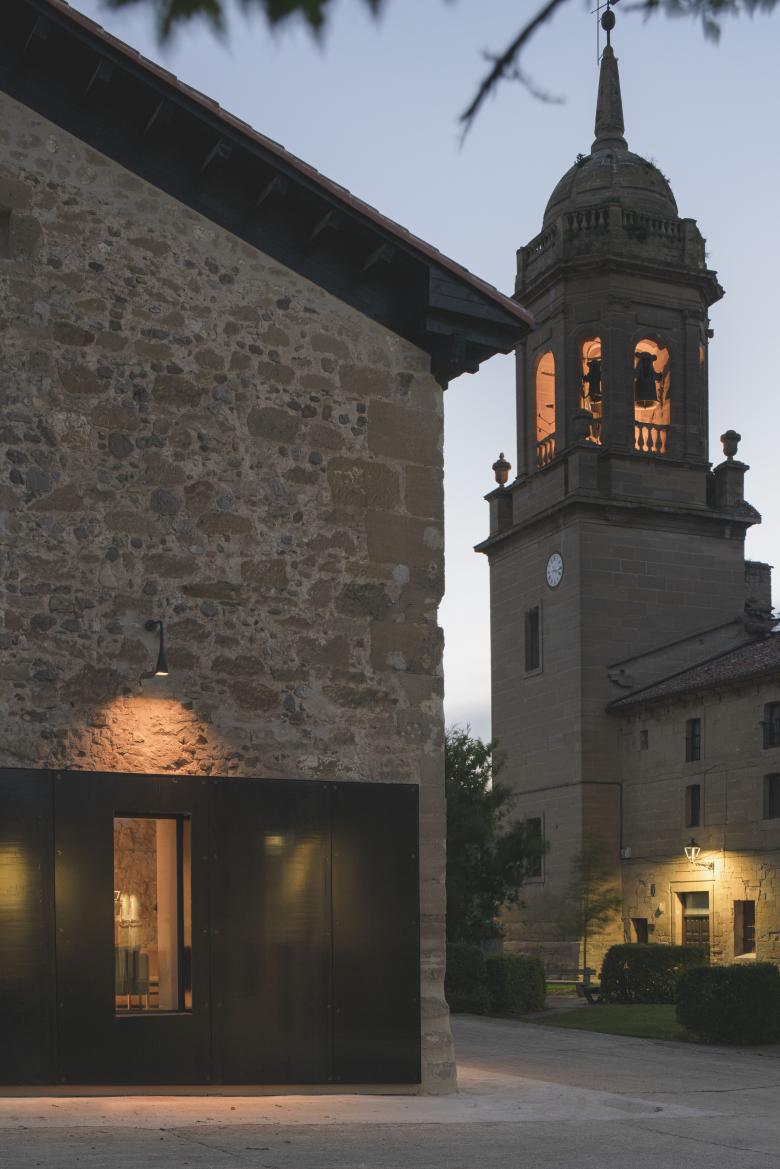 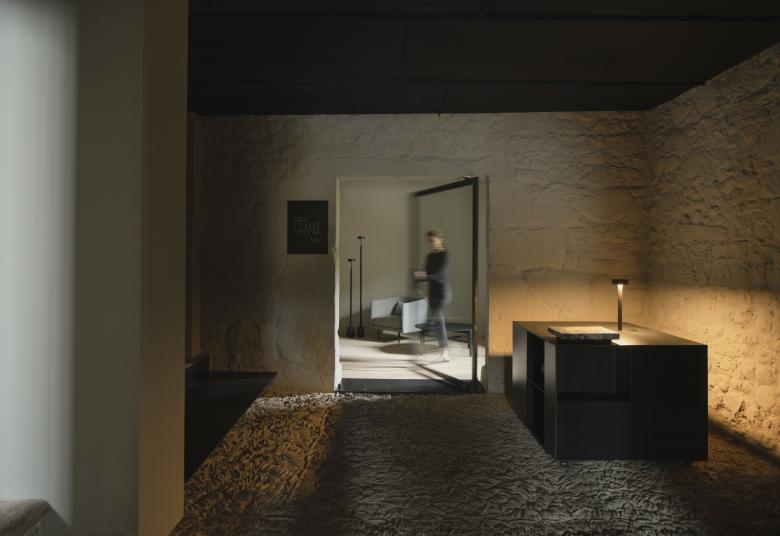 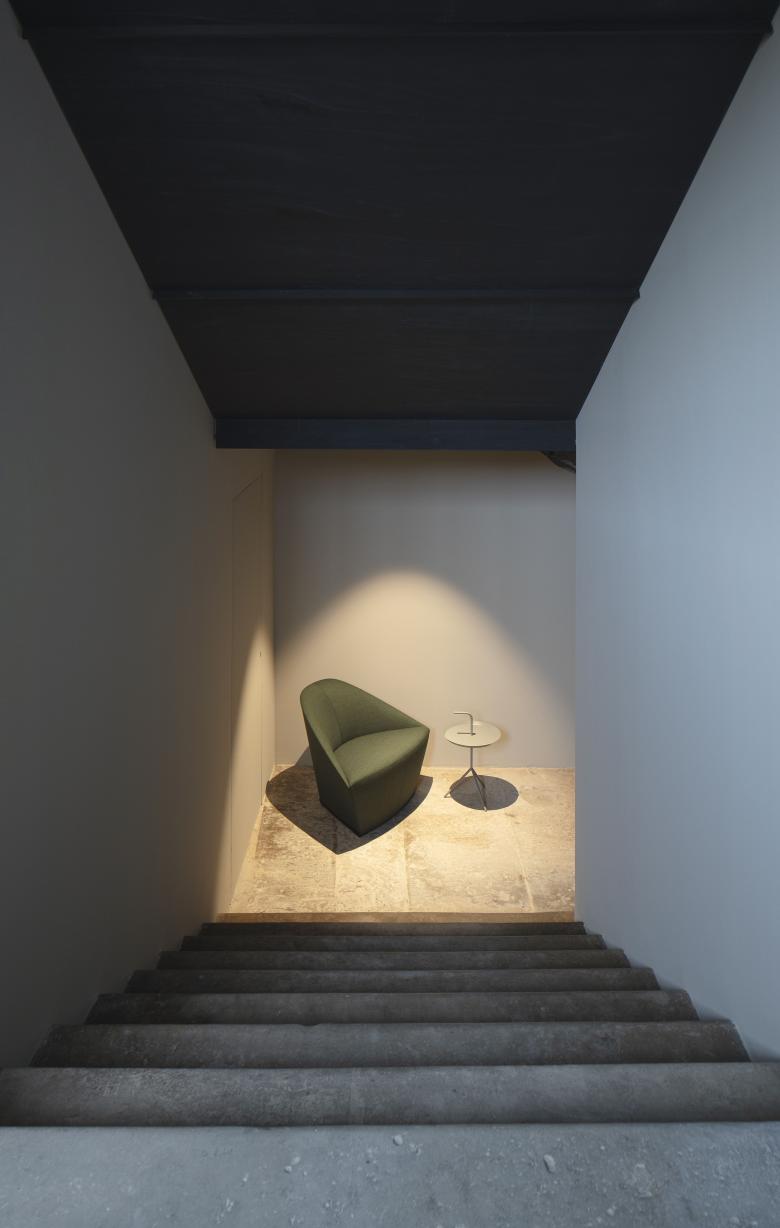 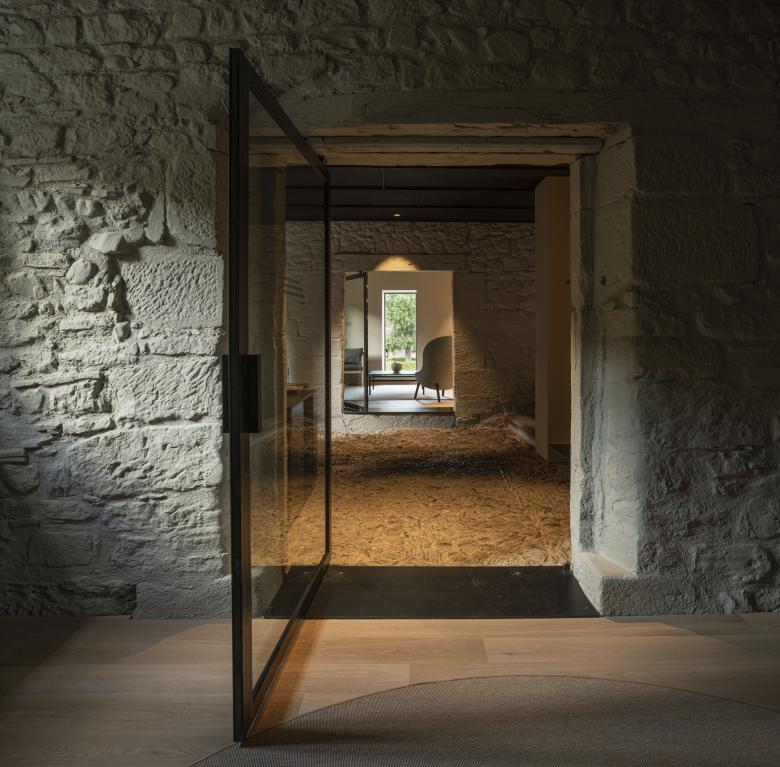 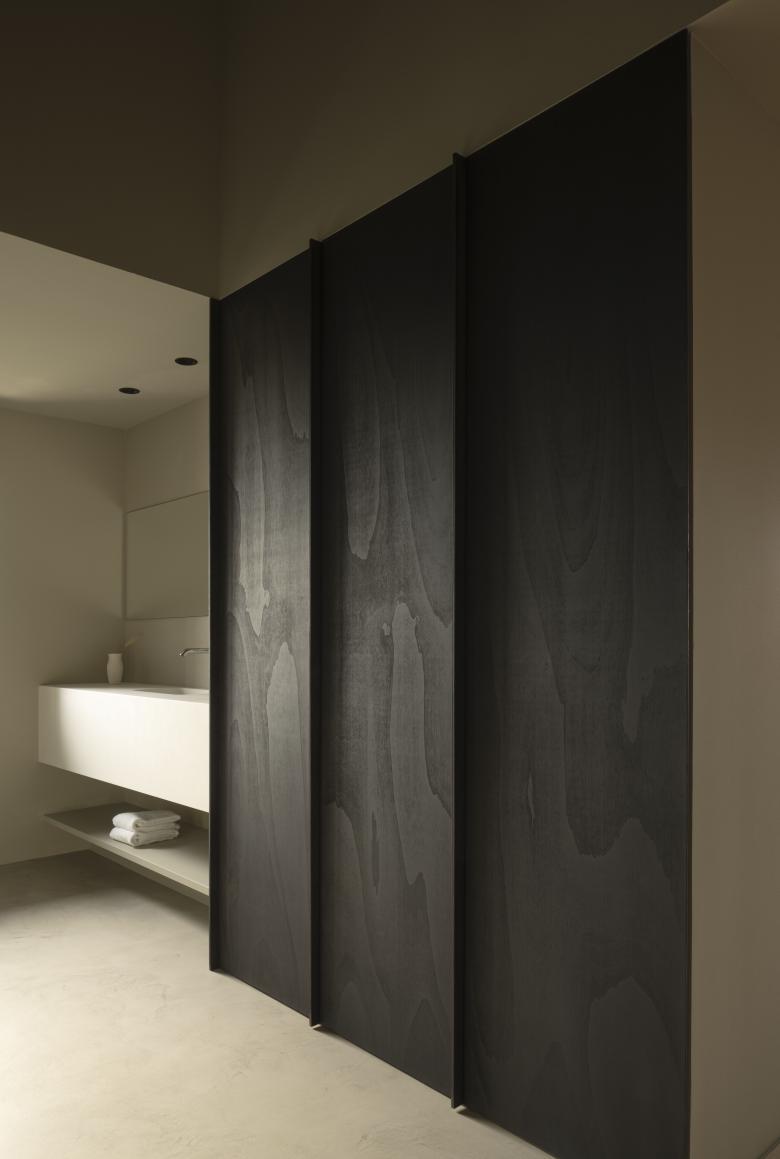 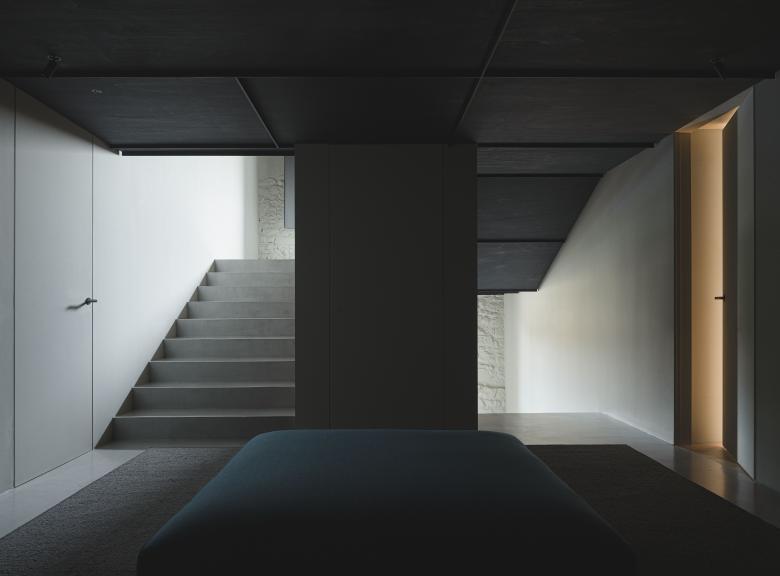 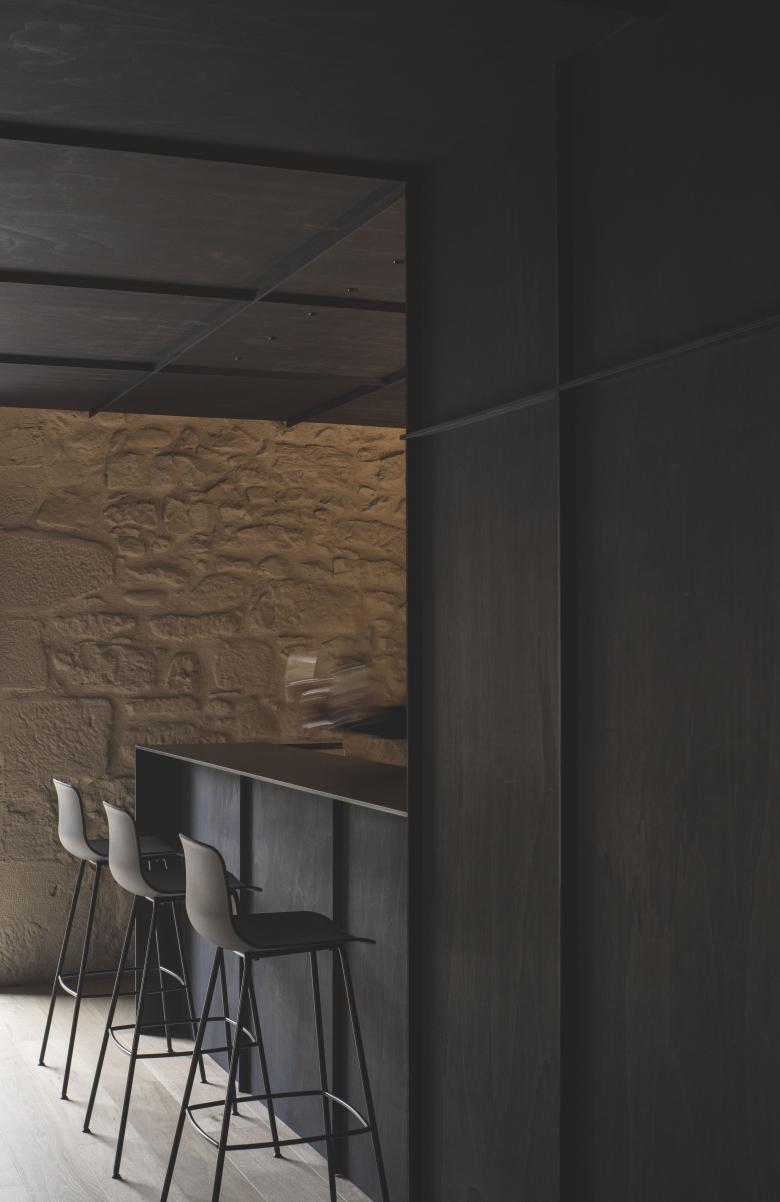 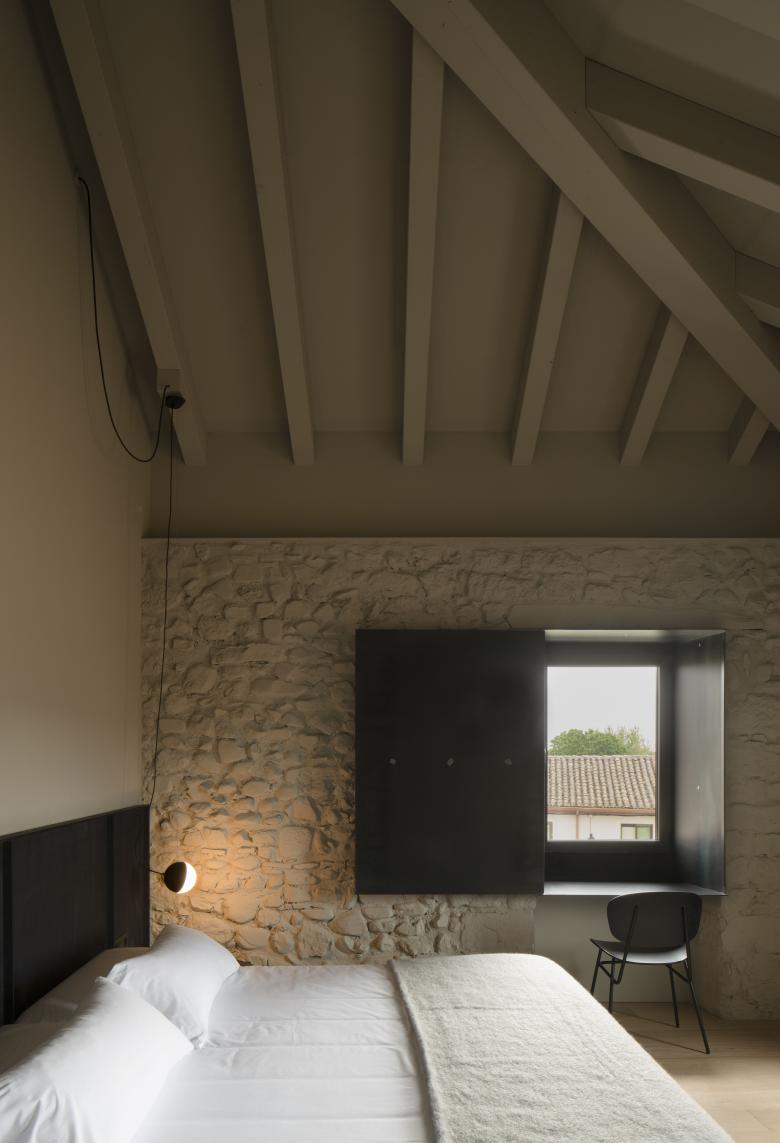 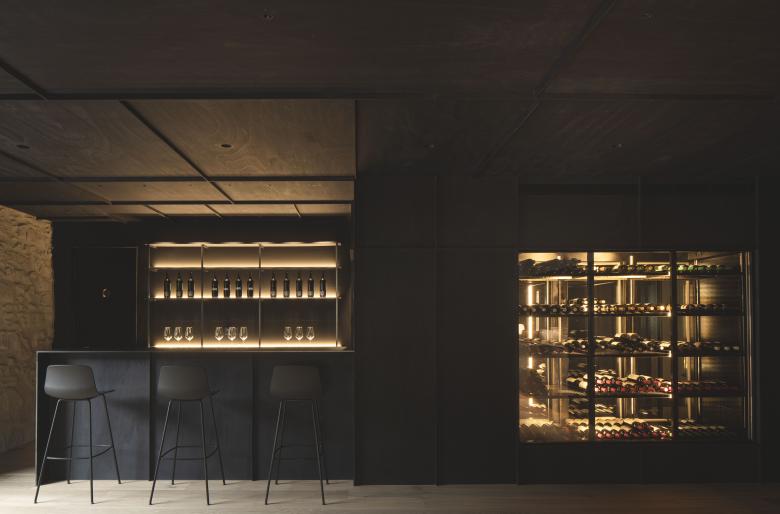 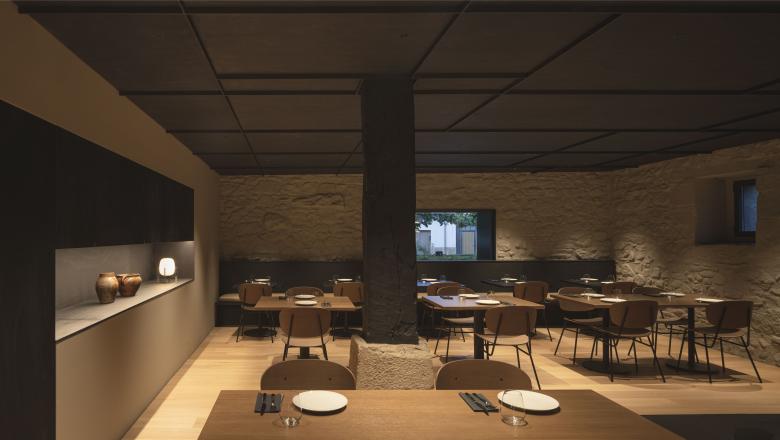 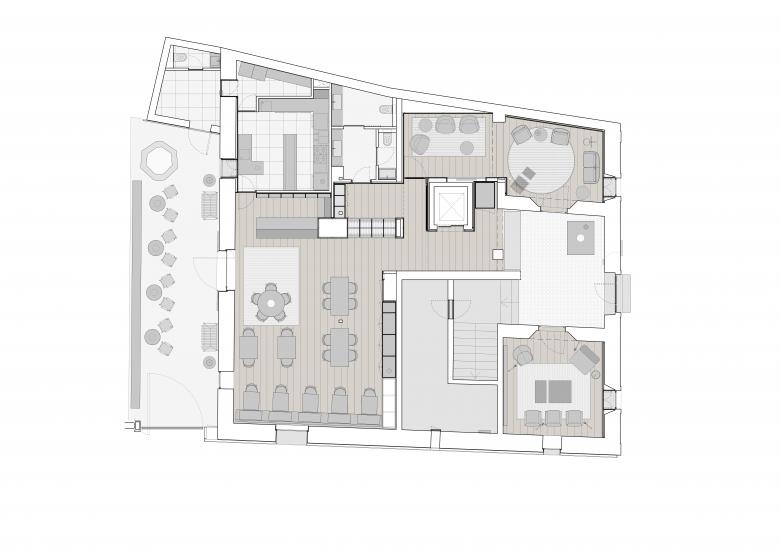 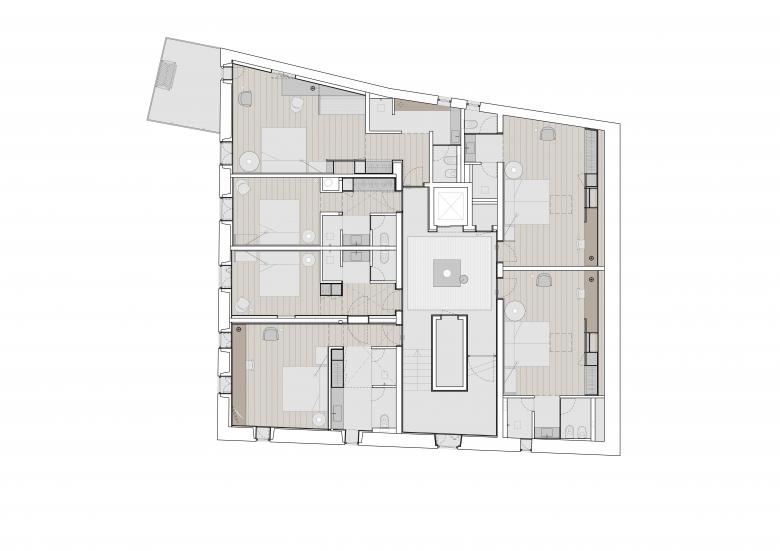 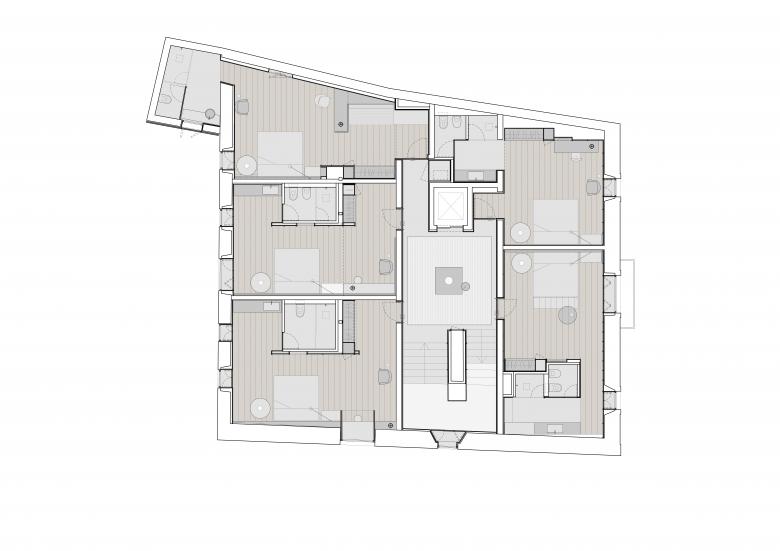 "There is nothing more gratifying and beautiful than deconstructing a forgotten building to recover the history that underlies it.”
–Francesc Rifé

There are places you run away from and places to run away to. Tired of their hectic lives in a tourist town on the Costa Brava, Mònica and Raül decided to find a quiet place in La Rioja to simplify their lifestyle. The couple and their two daughters found an 18th-century manor house in Grañón, a tiny charming village where the Camino de Santiago passes through. The property had enough space to create a very relaxing and convivial hotel with only 11 rooms. Casa Grande Hotel is the affirmation of this idea turned by our studio into a scene that intends to make you feel at home.

With a design in which a modern and sober collection of materials quietly co-exists with original features, the main purpose of the project has been the preservation of the ashlar walls on which a light grey monochrome layer has been applied to unify the tone. This technique also aims to provide a certain luminosity to rooms where the thickness of the walls often does not help the entry of natural light. On the other hand, and contrasting with the clarity of the stone and the natural oak floors, there is the black poplar wood that runs throughout the space integrating the lighting and hiding technical devices such as loudspeakers. This color is also emotionally linked with pillars and beams restored in a dark tone.

The entrance that seemed to be the main reception of the hotel finally becomes a lobby for guests only, while a large iron pivoting door, that connects a square with the rear terrace, acts as the public access to the building. Inside, the lobby features a large metal welcome piece of furniture, and on both sides of it are the library and television rooms that work as spaces for rest and entertainment. Behind this, the restaurant interacts with a small cellar and with a counter bar next to the kitchen. The chef has based the menu on regional dishes full of flavor but not complex, in harmony with the atmosphere of the hotel. A terrace, with different seating areas, works symbolically as the lung of the hotel

The poor condition of the façade openings has led to the use of 10mm blued iron structures to maintain their squareness, and aluminum windows have been combined in a similar finish. Metal pivoting doors not only serve to contain the light but are part of the conceptual aesthetic of the rooms. These elements are always folded parallel to the facade and have ended up becoming decorative gestures used throughout the entire project, and both inside and outside.

The building has two more floors. The first one has 5 rooms with a similar aesthetic but with different features and distribution. Some of them maintain the ashlar walls, while the others have left the exposed brick or the concrete itself used to rehabilitate the building. Avoiding the overelaborate atmospheres, the same monochromatic treatment has been used to unify the different textures. The second floor has 6 rooms distinguished by a higher height. All of them have been designed as suites with a large bed and some with a sofa that doubles as a single bed. Following the same approach as the rest of the project, the custom-made furniture has been designed in black poplar wood, using small slats to mark specific elements of each room, either as the top of the head of the bed or the openings where the minibar is hidden. A semi-open but discreet wardrobe allows guests to have their clothes on hand. Like the ceilings on the ground floor, that of the distributors on the different levels and the lower staircase is covered with the same black stained wood material to lose the feeling of height.

The side façade, perhaps the most monumental part of the project, starts from a chaotic original distribution of the former windows that seeks to arrange them under a new skin of blued iron. It is the same surface that extends as a pivoting door to give access to the hotel terrace. This element has a double meaning, on the one hand, it reinforces the aesthetic narrative of the metal that has been used to design windows and balconies, but at the same time, it hides different lateral openings that house machinery, electrical wiring, etc. In this façade, the Campanula lamps, designed by the architect Peter Zumthor for Viabizzuno, have been placed to communicate to the visitors from the beginning the rationality and care with which the project has been built. Inside, there is general and integrated downlight lighting, secondary and linear lighting that aims to highlight the restored surfaces and the third kind of decorative lighting that defines the hotel's intimate mood.

Other Projects by Francesc Rifé Studio